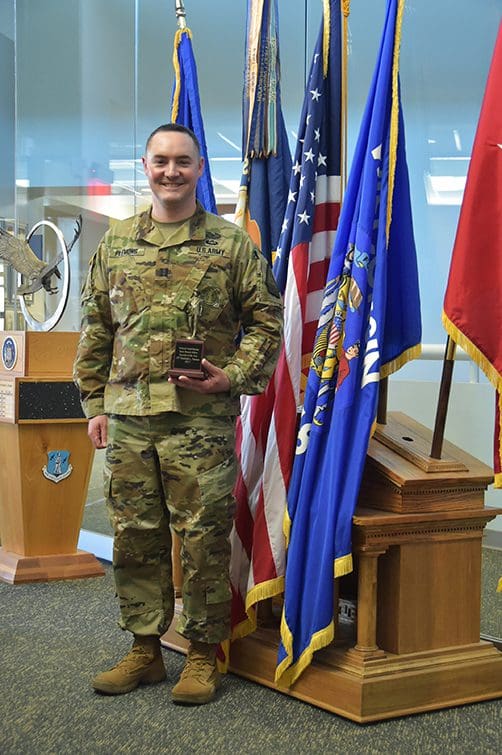 MADISON, Wis. — One of the nation’s top officer recruiters belongs to the Wisconsin Army National Guard.

The National Guard named Capt. Lee Plemons, an Oconomowoc, Wisconsin resident, the 2017 Basic Branch Officer Recruiter of the Year after he and the ROTC recruiting team led the nation in recruiting new cadets destined for officer careers in the National Guard.

“It’s nice to be recognized, but it’s really a team award,” Plemons, who was responsible for recruiting basic branch Army officers, said. “We put some initiatives in place a couple of years ago, and we’re starting to see the fruits of that labor.”

Plemons said the credit really belonged to the team of noncommissioned officers and leadership within the Wisconsin Army National Guard’s Recruiting and Retention Battalion that allowed him the opportunity to succeed resulting in an influx in projected officer gains from ROTC in the next few years.

The impact was so big, in fact, that in 2017, Wisconsin led the nation in total number of National Guard Minuteman ROTC scholarships with 41.

The commander of the Wisconsin Army National Guard’s Recruiting and Retention Battalion, Lt. Col. Dean Nemecek, praised the work of Capt. Plemons and that of the team.

“Capt. Plemons and the entire team worked hard on this achievement,” Nemecek said. “Capt. Plemons’s innovative approach to obtaining Minutemen scholarships was a major factor in the Wisconsin Army National Guard having the highest number of scholarships across the nation.”

According to Plemons, the numbers are less important than the future impact their efforts will have on the organization in the future.

“For us, it’s nice today, but when you start looking at mission sets in 2020 and 2021, we’re looking at having a significant number of incoming officer for the state because of those campaigns,” he said.

The National Guard and U.S. Army Cadet Command rolled out its Minuteman recruiting campaign a few years ago. Wisconsin ranked 17th in the campaign’s first year with eight scholarships, ninth nationally in 2016 with 35, and then first in 2017. The scholarships require nominations from the adjutant general or civilian aids to the secretary of the Army. The scholarships are Guard-specific, meaning the officer will commission into the Reserve component upon graduation after receiving a free education, monthly stipend, leadership training and more.

“We’re out there looking for those future leaders of our organization,” Plemons said. “Those people who are going to step into those platoon leader roles immediately, but are going to progress into those captains, majors and lieutenant colonels down the line.”

Recruiting quality officers and future leaders is vital to the health of an organization charged with two no-fail missions. The National Guard must always be ready to serve in times of domestic emergency and when the nation requires its service as the primary combat reserve of the Army. The importance of that mission is not lost on Plemons or others who recruit the organization’s next generation of leaders.

“I get to go out and tell people about the Guard story every day,” he said. “I’ve been passionate about doing this for 16 years now, and love being able to share with other what the Guard does and how that potentially could be an opportunity for them or somebody they know. It’s easy to sell it when it’s something you enjoy doing.”

Plemons actually transitioned out of his role as the ROTC officer recruiter in late 2017, but he said his replacement, Capt. Dave Kranz, hit the ground running and is off to a great start. He also credited Master Sgt. Alex Quade and the rest of the noncommissioned officers on the team for the organization’s success. Quade, in particular, Plemons said, had some specific ideas and initiatives that were effective that he then worked to implement statewide. Ultimately, Plemons and his leadership decided to focus heavily on recruiting college campuses working hand-in-hand with the ROTC recruiting operations officers and National Guard recruiters embedded in the ROTC programs on campuses across the state.

“So we doubled our efforts on campus, but we saw more than double the results because of it,” he said. “A lot of that I think was just opportunity, being in the right place at the right time and recognizing some opportunities for process improvement implementation that clearly paid dividends.”

The fruits of that labor will become apparent in the coming years as more and more cadets graduate as officers, become platoon leaders, company commanders and ultimately lead the organization’s largest formation. It’s a long-term investment — it takes anywhere from two to four years to commission an officer — but planting those seeds now helps ensure the Wisconsin National Guard will be in good hands for generations to come.