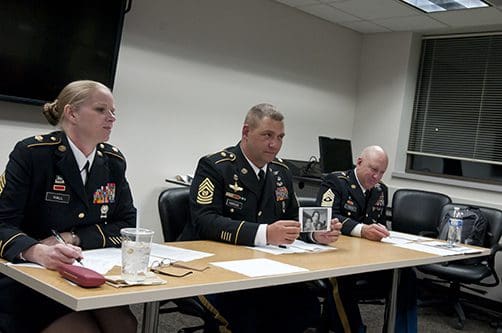 Command Sgt. Maj. Georget Hall, left, as a board member during a Best Warrior Competition in 2014. The appearance board was held at Fort McCoy, Wis., in the 426th Regional Training Institute, where she will assume responsibility as the school’s first female senior enlisted advisor. Wisconsin National Guard photo by Pfc. Christopher Enderle

Wisconsin Army National Guard Command Sgt. Maj. Georgett Hall enlisted in the U.S. Army Reserves in 1993, never anticipating that she would stay in the military to obtain any rank past specialist or sergeant.

Hall said the idea that she could become a command sergeant major was planted when she began a career working full time for the Wisconsin National Guard as part of the Active Guard Reserve program.

“As the years passed and I started to gain knowledge and experience, it became apparent that I love what I do, and I could really be successful,” Hall said.

Now, 25 years since enlisting, Hall is preparing for a new role in her military career. In April, shortly after the conclusion of Women’s History Month, she will assume the responsibility of being the first female command sergeant major for the Wisconsin Army National Guard’s 426th Regiment Regional Training Institute (RTI) at Fort McCoy.

“It’s an amazing opportunity, and I’m sure my emotions are the same as all the male Soldiers who have taken it before me,” Hall said. “I’m excited and a bit nervous, but ultimately, I’m going to do the best I can and accomplish the requirements of the position.”

Unlike other Wisconsin Army National Guard brigade-level organizations, the 426th instructs and provides in-depth training courses for Soldiers from throughout the country. The 426th trains future leaders through its Officer Candidate School and Warrant Officer Candidate School, and provides technical education for field artillery qualifications, truck driving, combat lifesaving and several other courses. Approximately 2,500 Soldiers from different Army components went through courses conducted by the 426th in 2017.

“The 426th is in a growth pattern because the unit is taking the initiative to remain very relevant, and the Army is relying more on the Regional Training Institutes to train the force,” Command Sgt. Maj. Ralph Rosemore, the current senior enlisted advisor for the 426th, said.

Recently, more courses have become available to Soldiers through the 426th, such as the unit Movement Officer and the Joint Fires Observer courses. These courses were sought out by the 426th, and serve both the Army’s needs and support the Wisconsin Army National Guard’s readiness requirements, Rosemore said.

That readiness is vital for the National Guard, which fulfills a critical role in the nation’s defense structure as both the first military responder here at home in times of emergency, but also as the primary combat reserve of the Army and Air Force. 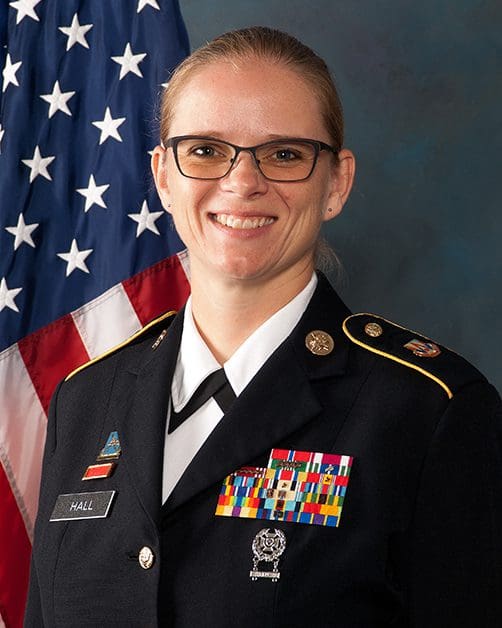 Hall plans to help continue the growth and relevance of the 426th, filling needs that may not be realized yet in the Army.

“As I attend training and conferences on behalf of the 426th RTI, I’ll be able to assess what other courses we may be able to add later,” Hall said. “It’s about remaining relevant while supporting the readiness goals of the organization, so I can’t tell you what courses are next. I can only tell you there will be other courses.”

Hall will be a great asset to the 426th because of the experience she has, Rosemore said.

Hall currently serves as the 64th Troop Command operations sergeant major. She enlisted as an intelligence analyst and has served in that role in many capacities, including during deployments to Kuwait and Iraq. She has been with the Wisconsin National Guard since 2001, but also spent time serving on active duty for three years and later with the New York National Guard.

“She has a great ability to interpret strategic priorities and relate them to leaders at the operational and tactical levels for execution,” Rosemore said. “Not many leaders are capable of that.”

As a leader, Hall said she likes to remain flexible, and keep Soldiers involved so they have a chance to be part of solutions.

“Soldiers who have a say in the outcome are more likely to be invested and tend to put more effort toward the final product,” she said.

Hall hopes to motivate Soldiers as both a leader and a role model. She realizes that there are many young Soldiers hoping to accomplish what she has in her career.