Wisconsin Army Guard unit to deploy to U.S. Naval Base in Cuba 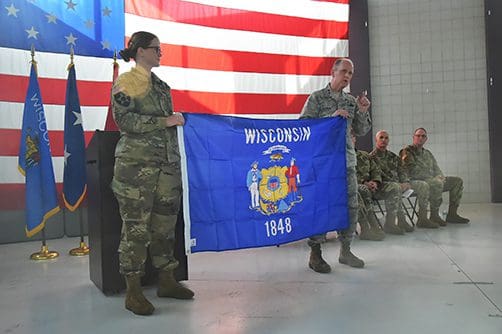 The detachment will principally interact with civilian media there to report on detainees held at Joint Task Force Guantanamo for military trial as part of the Global War on Terror. And the deployment will be a return visit for the two senior members of the deploying detachment, who were with the unit during its 2008-09 deployment to Cuba.

“It’s the same mission at Joint Task Force Guantanamo,” 1st Sgt. Jim Wagner said. “It’s about the safe and humane care and custody of detainees. That mission is still there. As public affairs, we’ll be supporting that mission.” 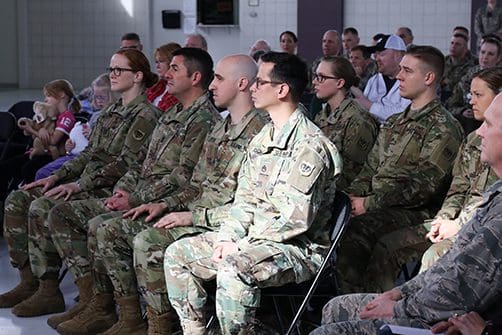 Capt. Gretel Weiskopf, the officer in charge of the deploying Soldiers, noted that the mission has changed slightly from 10 years ago, when the 112th MPAD also had a larger internal and external communication mission than is expected on this tour. On the 2008 deployment, Wagner managed the Joint Task Force website and helped push media products out to news outlets in the United States. Weiskopf was a key member of the team that produced a weekly newsletter for the Joint Task Force.

Weiskopf became engaged during her last deployment. Now married for nine years and with two daughters, she spoke of being intentional for what will be her third deployment overall — her first deployment was to Iraq in 2003 with the 139th MPAD, a unit shared by the Wisconsin and Illinois National Guard.

“We’ve kind of made plans on how to stay in touch while I’m gone,” Weiskopf said, “and things I can do with my daughters to make them feel important and included.”

Wagner’s first deployment was during Operation Desert Storm, and he has deployed three additional times during his career, each time in a public affairs mission.

“At this point, being the fifth deployment, [my kids are] more blasé about this than they were the first couple of times,” he said. “This is old hat for them.”

This will be the first deployment for Sgt. Marena Erickson, a high school English teacher with the Shawano Community School District. Her daughter is about one and a half years old.

“For me, it was very important that my family, specifically my daughter, understood that I was doing this deployment for her and not instead of her,” Erickson said. “I think we’re at that perfect age where she’s not going to remember a whole lot of this — it’s going to be harder on me, I think, than it will be for her.” 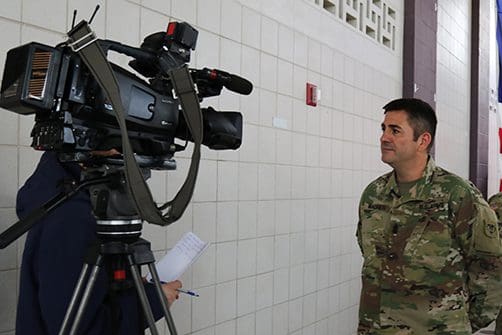 Erickson said her school was very supportive of her deployment.

“They have gone out of their way to make sure that I feel secure in knowing my job is going to be there when I get back,” she said. “They also called school five minutes early the day that I left so that the kids could come and say good-bye.”

“My employer has been nothing but fantastic in their support for me the whole time,” Wagner said. “There’s never an issue if I needed time off, even when it was only two or three days’ notice.”

Such support from communities, employers and families is a critical component to what the makes National Guard “always ready and always there” to fulfill its unique dual-mission as the state’s first military responder in times of emergency and as the primary combat reserve of the Army and Air Force.

During the sendoff ceremony, Weiskopf told families and friends that she was grateful for the opportunity to lead these Soldiers to Guantanamo Bay.

“As Citizen Soldiers, we have a special mission of leaving every once in a while and doing our mission overseas, and then coming back and being residents here in Wisconsin,” she said.

Command Sgt. Maj. Rafael Conde, the Wisconsin Army National Guard’s senior enlisted leader, was born in Cuba and was able to revisit the country of his birth in late 2016 during an official visit with the Wisconsin Army National Guard’s 32nd Military Police Company, which was conducting detainee operations at Joint Task Force Guantanamo. While on that visit, Conde said he discovered a little area called “Conde Beach.”

“I think I own it,” he quipped. “So I want you to stick something in there for me — a beach house.”

Conde told the families and friends at the sendoff ceremony that the deploying Soldiers had the easy job, as they would not have to deal with broken vehicles or appliances back home.

Maj. Gen. Mark Anderson, Wisconsin’s deputy adjutant general for Army, described the deployment as a great opportunity for every Soldier.

“Each and every Soldier here is 100 percent American Soldier — but they’re more,” Dunbar said, “because they are Citizen Soldiers in our community, and responsible to the governor and the state of Wisconsin until called to federal active duty as they are being called right now.”

Dunbar described the 112th MPAD as the Army’s finest public affairs unit, and said the whole world is watching what the United States is doing at Joint Task Force Guantanamo.

“When you go downrange to Gitmo, you should know that you have the state of Wisconsin with you every step of the way,” Dunbar said.

Spc. Amber Peck has been in the Wisconsin Army National Guard for nearly four years, and has conducted annual training in Poland and South Korea. This will be her first deployment.

“I’m expecting a lot of new things that we’ll be able to bring back and train the people that weren’t able to come,” she said. “I’m just really excited to have this opportunity, and I think the Guard was a really good choice for me.”

Staff Sgt. Oscar Gollaz is also going on his first deployment after 10 years in the military.

“I expect a lot of opportunities for growth in many different areas of my military career,” Gollaz said. “We have a fantastic team, very professional and very well trained. We look forward to going down to Guantanamo Bay and representing Wisconsin well.”

Erickson said she also looked forward to honing her skills as a military reporter and media facilitator.

“Having served in the National Guard for about six years, I’ve had several opportunities to serve my state and operate in support of the state mission,” Erickson said, “but I’m really excited to be serving as part of that federal mission and to show that the Wisconsin Army National Guard is always ready to support the mission at any time.”

The 112th MPAD will complete mobilization training at Fort Bliss, Texas, before deploying to Guantanamo Bay.