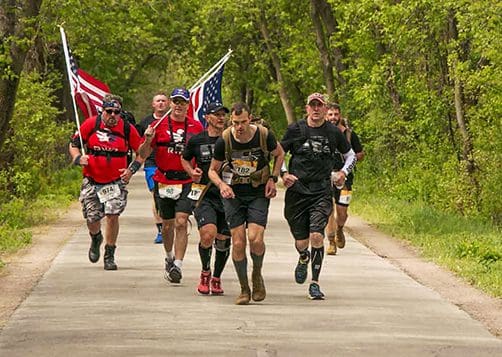 Flanked by supporters, Sgt. 1st Class William Kocken of the Wisconsin Army National Guard focuses on completing a 26.2-mile marathon while wearing a 100-pound rucksack May 20 in Green Bay, Wis. Kocken endured the grueling event as a fundraiser for his veteran charity. Submitted photo

If you are a Soldier in the Wisconsin Army National Guard’s 2nd Battalion, 127th Infantry, you probably know Sgt. 1st Class William Kocken as the full-time readiness noncommissioned officer for Company A. If you are a veteran in the Green Bay, Wisconsin area, you may know Kocken as the current president of the veterans charity group 4th HOOAH (Helping Out Our American Heroes).

Now there may be another title to add to the list of accolades: world record holder.

Laden with a 100-pound rucksack and wearing combat boots, Kocken completed the 26.2-mile Comcell Marathon in Green Bay on May 20 in 6 hours, 27 minutes and 59 seconds. The world record, set in London last year, was 6 hours, 47 minutes and 3 seconds.

“Crossing the finish line felt amazing because I knew I had gone an insane distance with an insane amount of weight, but when I knew I had the world record, unofficially, it was like a huge burden taken off my shoulders,” Kocken said.

Not just the literal weight of a 100-pound rucksack, but the figurative weight of expectations. Kocken tackled this torturous task as a fundraiser for 4th HOOAH, which helps veterans with bill assistance as well as outreach programs to get veterans into the community doing activities they might not otherwise do, such as skydiving, whitewater rafting and scuba diving. 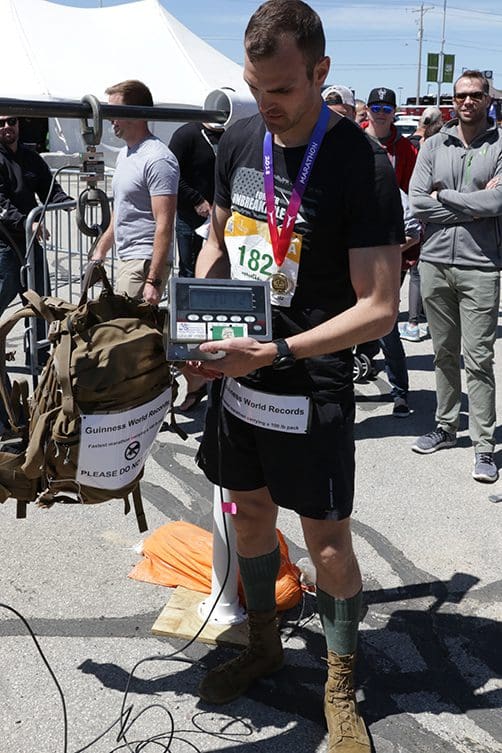 Taking the easy route apparently isn’t how Kocken operates. He had already completed the marathon portion of the Iron Man competition wearing a 40-pound rucksack as a fundraiser, which sparked the idea of setting a ruck march endurance world record. So about 17 months ago, Kocken and his charity associates decided that the 100-pound rucksack marathon record needed to be broken.

“Because it was the most difficult, it would raise the most money and the most awareness,” Kocken said.

But the ambitious goal nearly expired right out of the gate, when Kocken and a friend put on 100-pound rucksacks and hit the road.

“We went a quarter mile down the road, turned around and brought it back, and we were like, ‘This is stupid,’” Kocken recalled. “The guy that owns this world record is not human. There’s no way that you can do a marathon with a 100-pound pack, much less at the speed in which he did it.”

But after two or three weeks, Kocken decided to go for the record after all, and began a training regimen. At one point, he was logging up to 65 miles per week between running and walking with the rucksack. In January he realized he was not at a world-record pace, so he determined to put in 600 miles of training before the May 20 marathon. Up to 130 of those miles were with a rucksack.

He said he would have used a military rucksack for the marathon, but it couldn’t handle carrying 100 pounds for that distance.

Kocken admitted he struggled with a proper pace during the marathon. For the first 12 miles he wanted to maintain a pace somewhere between 12:30 and 13 minutes per mile.

“I ran the first mile in 11:11,” he said. “I knew that could come back to bite me later in the race, but my adrenaline was through the roof. I tried to pull back the reins as much as I could. I got through the first five miles wanting to be averaging just over 13 minutes, and I was at a 12:45 pace.”

He was able to maintain a pace between 14-15 minutes per mile until around mile 18, when he hit the “marathon wall.”

“My feet were destroyed to the point that I could no longer hang onto that pace,” Kocken said. “At that point I had a significant lead on the world record, about a 37-minute lead, so I knew I had some cushion.”

He knew that he would break the record so long as he did not suffer an injury. At two miles to go in the marathon, he still had a 27-minute lead on the world record.

Crossing the finish line and verifying that his rucksack still weighed at least 100 pounds provided a great sense of relief, Kocken said.

“I made it to the finish,” he said. “I accomplished a goal that I said I would do and could do, and just knew that it would motivate others to go out and do something big.”

During his 16 years in the Wisconsin Army National Guard — nearly 12 in the full-time Active Guard Reserve program — Kocken has mobilized in support of both the National Guard’s federal mission as the Army’s primary combat reserve and as the nation’s first military responder in times of emergency. He deployed to Iraq twice, in 2005 and again in 2009. He has also completed the Army Ranger and Army Pathfinder schools. And last year he was part of the Wisconsin National Guard response to Hurricane Irma in Florida.

His work with 4th HOOAH and other volunteer work is above and beyond his Guard responsibilities.

“If you want to do something, you’ll always make time for it,” Kocken explained. “So when other people are at home watching TV, I’m just working.”

One item remaining on his to-do list is to finish submitting all the verification data from his record-breaking feat — including uploading about 90 gigabytes of video from the marathon — to obtain official recognition. He noted that it could take up to 18 weeks.

“I’ll be super relieved when Guinness gives me a phone call and says that I actually have the world record,” Kocken said.