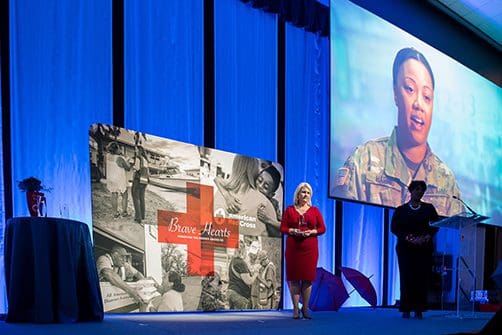 MENOMONEE FALLS, Wis. — A Wisconsin National Guard Soldier who saved a choking toddler last December was formally recognized for her actions by the American Red Cross of Southeast Wisconsin at the organization’s Brave Hearts event.

Brave Hearts is an annual event to recognize individuals who have prevented life threatening situations from occurring, come to the aid of another, or contributed to the safety of the southeast Wisconsin community through a single act or ongoing activity, said McKenna Olson, events specialist for the American Red Cross of Wisconsin. There are five different award categories: Community Safety, Security & Resiliency, Emergency Response, From the Heart, Military, and Youth.

On Dec. 7, 2017, Harris was traveling on military orders and waiting for a flight at the O’Hare Airport in Chicago when a waitress at a restaurant yelled that a girl was choking. Harris said she went straight into reaction mode as she performed the Heimlich maneuver on the child, saving the girl’s life. 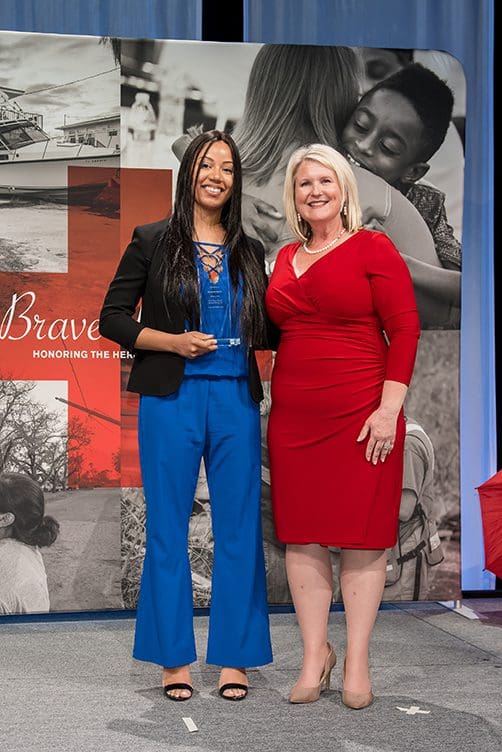 “I feel like at that moment and at that time, it was my duty,” Harris said. “Not only was I on orders, but all I could think about in my head was I don’t want anything to happen to this child — not in front of me, not right now. This is not her time.”

Harris said a retired command sergeant major contacted her after reading about what happened, and in turn nominated her for the award. In mid-February, Harris learned that she was chosen to receive the award.

“I was pretty shocked when they said that,” Harris said.

Leading up to the ceremony, all of the awardees were interviewed for a video to tell their individual stories.

“They played the video before you went up to get the award,” Harris said. “It was really cool to hear the other stories of other people saving lives.”

Harris thanked the Red Cross for the recognition and said she felt grateful and appreciated as she received the award.

Her unit also recognized her earlier this month by awarding her the Army Commendation Medal.

While it feels good to be recognized for what she did and saving a life, she said she still feels the same. In the video played at the ceremony, Harris stated that she doesn’t feel like a hero.

“If I go out and someone needs my help or something is happening, I’m going to help and assist,” she said. “That’s just who I am as a person.”

“At the end of the day, I don’t expect anything from it,” she added. “When I did that, I felt good inside of my heart. That’s all that matters.”

That sort of mentality is what helps ensure the National Guard’s readiness to serve as both the primary combat reserve of the Army and Air Force and as the first military responder in times of emergency.