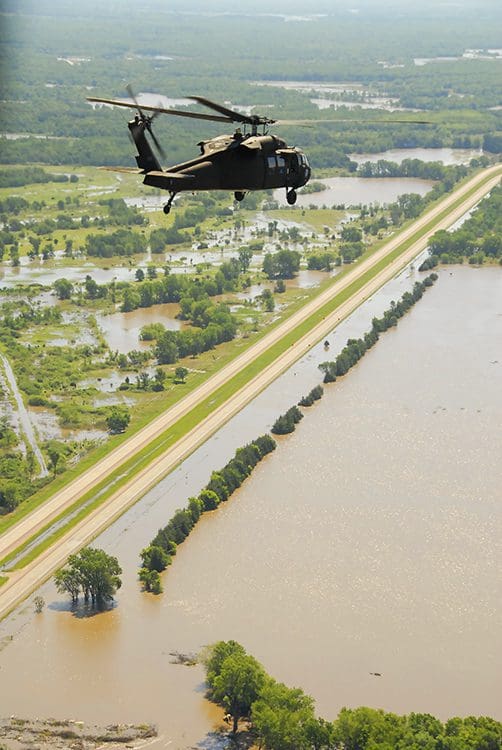 This week marks the 10th anniversary of the start of the devastating 2008 floods in southern Wisconsin. Three people were killed and thousands of homes and businesses were damaged or destroyed as flood waters impacted 31 counties for almost a month. It was the worst disaster since the Great Floods of 1993 that hit the Midwest.

“It’s hard to believe that it has been 10 years since the 2008 floods forever changed communities such as Gays Mills and Rock Springs along with Lake Delton,” said Maj. Gen. Don Dunbar, Wisconsin’s adjutant general and Homeland Security Advisor. Dunbar was adjutant general at the time and oversaw the state of Wisconsin’s response to the flooding.

“Our first responders and communities did a great job,” Dunbar said. “It seemed every day, a different area was experiencing major flooding. There was water everywhere.” 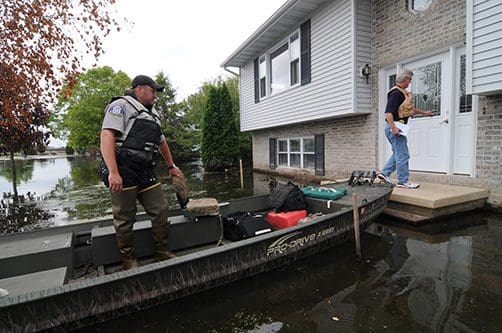 In the early summer of 2008, southern Wisconsin was primed for a major flood. The ground was saturated from flooding that had occurred in the previous year, combined with record-breaking snowfall during the winter. When heavy rains began on June 5, there was soon widespread flooding because there was no place for the water to go. Some areas would eventually receive up to 14 inches of rain that month.

One of the more visual events was the draining of Lake Delton on June 9. As the lake levels continued to rise, it caused the sandy soil along the eastern edge of the manmade lake to give way, draining the entire lake into the Wisconsin River and destroying five homes.

Wisconsin’s Emergency Operations Center (SEOC) was activated for nearly three weeks as heavy rains continue to move over the same stretch of southern Wisconsin. The rains not only flooded homes and businesses but also forced the closure of numerous roads, bridges and even interstates. Within days, President George W. Bush declared a federal disaster area for 31 counties. 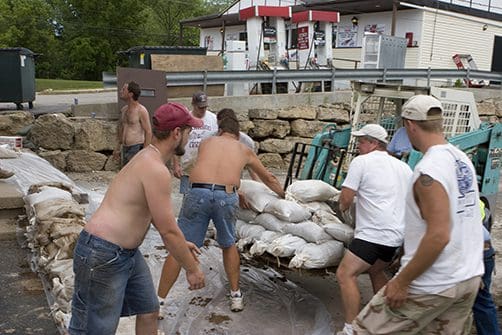 Many agencies responded to the flooding. The Wisconsin National Guard assisted with diverting traffic from flooded interstates, delivered sandbags and water, assisted local officials with evacuations and provided aerial assessments with the RC-26 aircraft.

“The RC-26 provided us with real-time video downlink capabilities,” Dunbar said. “It allowed us in the SEOC and the National Guard Joint Operations Center to see immediately endangered dams and other flooded areas.”

When emergencies and disasters occur today, Wisconsin has a new tool to help gain immediate situational awareness. Unmanned aerial vehicles or drones can provide critical tasks including spotting people in need of help, provide a view of impacted areas and assess damage to buildings, bridges, roads and power lines. They can also be used for searching of missing persons, hazardous materials incidents and other high-risk areas. 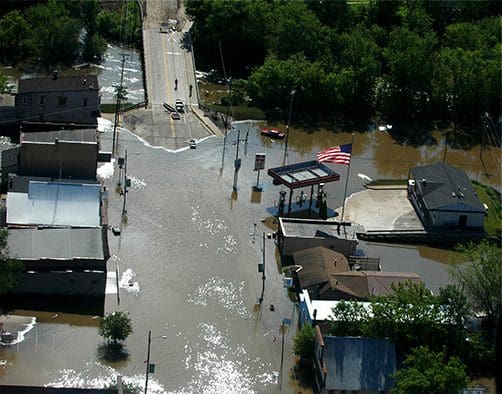 Rock Springs in Sauk County was one of many communities across southern Wisconsin impacted by historic flooding in this June 14, 2008 image. FEMA photo by Barry Bahler

In 2008, floodwaters displaced thousands of people, with more than 2,600 seeking emergency shelter. Volunteers provided 77,000 meals at mobile and fixed feeding sites. According to the Federal Emergency Management Agency (FEMA) nearly 24,000 individuals were approved for federal disaster assistance with more than $56 million in grants distributed to those impacted by the flooding through FEMA’s Individual and Household Program.

“The 2008 floods were a huge test for our state to respond to a disaster of that magnitude,” said Wisconsin Emergency Management Administrator Brian Satula. “In the last 10 years we have expanded our emergency plans and resources to respond to major disasters. This includes working closely with the private sector to provide goods and services to those communities impacted. We also have plans in place to quickly bring in additional support from other states under the Emergency Management Assistance Compact.”

Locals, state, federal agencies, nonprofit organizations, businesses and citizens worked hard to try and stop the damage from the raging flood waters and provide comfort and relief to those impacted. For many people, they would never live in their home again. More than 190 flooded homes and other structures were acquired and demolished under Wisconsin’s Hazard Mitigation Grant Program. It took six years for the Wisconsin Emergency Management Hazard Mitigation program staff to close out the 2008 flood projects.

More than 850 local and state government agencies applied for assistance under FEMA’s Public Assistance Program. FEMA obligated $48.5 million. While most of the repairs and financial reimbursement were made in two years, there were some larger projects that took longer. The final closeout for the 2008 flood was made in March 2017.

“Another lesson learned was the importance of long-term recovery,” Satula observed. “Just because the flood waters go away, doesn’t mean things are back to normal for a community. Recovery can take years, as many of these communities have discovered.”

Many communities also began looking at what could be done to prevent similar losses from occurring in the future. The village of Gays Mills was struck by back-to-back floods of the Kickapoo River in August 2007 and June 2008. Both flood events resulted in substantial losses to residents and businesses in the downtown area. After the 2008 flooding, the village began working with county, state and federal officials to help move businesses and residents to higher ground. The hard work paid off. When flooding occurred in 2016 and 2017, only a few businesses and homes left in the downtown area were impacted.