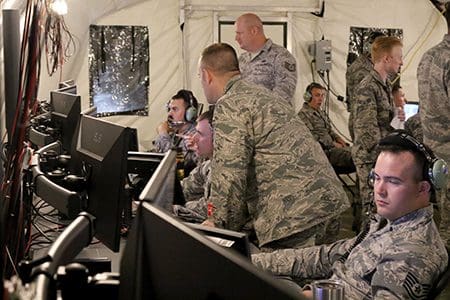 The 128th ACS manages military air traffic, supporting air operations from the ground. Airmen with the Squadron help to maintain the sovereignty of airspace, directing aircraft for a variety of missions in the homeland and overseas such as airborne refueling, search and rescue, transport, aerial battle and air strikes. The upgraded equipment enables the operating crew to control airspace on a larger scale.

“It’s kind of like going from Atari to Xbox 360 – that’s the best way to put it,” said Capt. Brad Kelly, chief of weapons and air battle tactics with the 128th ACS. “It gives us a tremendous amount of capability now which results in the end user, being the pilots from Madison, Milwaukee or wherever, getting a better product on the radio as we’re controlling and managing the fight.”

One of the biggest changes that came with the new equipment is the ability to seat up to 18 Airmen in the workspace. Prior to the upgrade, the 128th ACS had two of the old operations modules, which only had four workstations each.

“It more than doubles our capability as far as how many people we can sit to support a mission, and instead of a little box or container, it’s an open floor concept which allows us to communicate,” Kelly said.

Kelly added that one of the best aspects of the new equipment is that it allows the Air Control Squadron to support multiple missions simultaneously. The new equipment also allows Airmen to set up shortcut buttons instead of scrolling through menus to find a simple task, which saves time.

From a technical standpoint, the new equipment shrinks the Air Control Squadron’s footprint, leaving them with less to physically pick up and deploy, said Master Sgt. Kyle Dresen, a cyber transport craftsman with the 128th ACS. It also uses multiple radar sensors, allowing them to track approximately nine times more aircraft at a time, with a more precise picture on where each aircraft is.

“This equipment mimics the equipment used on overseas deployments,” Dresen said. He added that multiple airspace pictures can be viewed simultaneously.

Last November, the 128th Air Control Squadron returned home from a 6-month deployment to Southwest Asia. Following their deployment, Kelly said the transition to the new equipment has been “nearly seamless” due to how the equipment compares to what they used overseas. Similarly, newer Airmen arriving to the unit have already received training on the new equipment at their technical school.

“The youngest guys right now are actually the experts, and it’s your older guys that have been around on the old system who are looking to the young Airmen to help train them,” Kelly said.

When the 128th ACS isn’t supporting flight missions from the 115th Fighter Wing in Madison, or from Minnesota, they use simulated missions.

“With simulated trainer, we can run missions anytime we want,” Dresen said.

1st Lt. Cedar Hamilton, an air weapons officer with the 128th ACS, said the new equipment makes it easier to build simulations, and it takes less time to do so. She added that operators have the ability to customize their own displays, making the equipment more efficient for each user.

The 128th ACS will be validating new equipment as they use it to its full capacity during the Northern Lighting Counterland training exercise at Volk Field in August.