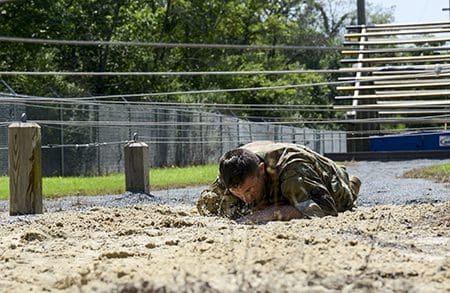 FORT INDIANTOWN GAP, Pa. — The Wisconsin National Guard’s bid to represent the Army National Guard at the Department of the Army Best Warrior Competition has fallen just short of the goal, but not for lack of effort.

“I feel I performed to the best of my abilities throughout the entire competition, pushing myself to my mental and physical limits,” said Spc. Austin Jahnke, an Eau Claire, Wisconsin native and a machine gunner with Company A, 1st Battalion, 128th Infantry, speaking about the Army National Guard Best Warrior Competition held July 23-27 at Fort Indiantown Gap, Pennsylvania. “This year’s competitors were all outstanding Soldiers, making it awesome to compete against the best.” 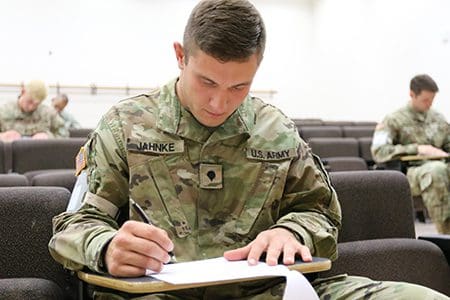 Command Sgt. Maj. Daniel Sullivan, the senior enlisted leader for the 157th Maneuver Enhancement Brigade who represented Wisconsin at the competition, said the grueling four-day event challenged competitors’ Warrior skills, mental and physical agility, personal determination and stamina. As if the competition wasn’t enough, the weather added to the challenge.

“A torrential rain of over 12 inches fell during the first two days,” Sullivan said. “Any rain that didn’t fall on their shoulders, they were forced to crawl through the following two days. They were constantly soaked to the skin, and the terrain was slick and mud-covered.” 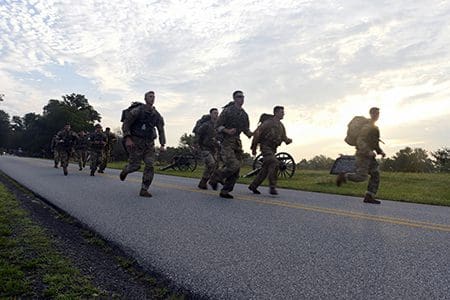 Jahnke said the level of competition at the Army National Guard Best Warrior was the highest he has ever witnessed.

“It was a complete spectacle to see the best Soldiers in the nation all in one place,” he said. “To be able to talk to them and see what makes them all the best is a huge take-home for me as I can use what I’ve learned and the knowledge I already have to shape myself and future Soldiers into the best we can be.”

Sullivan described the opportunity to observe elite Soldiers at the Army National Guard Best Warrior Competition as “a real honor.”

“While Spc. Jahnke did not win the competition, he should still feel a strong sense of pride and accomplishment,” Sullivan said. “He and his sponsor spent months preparing, and competed and won at the battalion, brigade, state and regional levels to get to this point. It proves their level of commitment to the Army profession.” 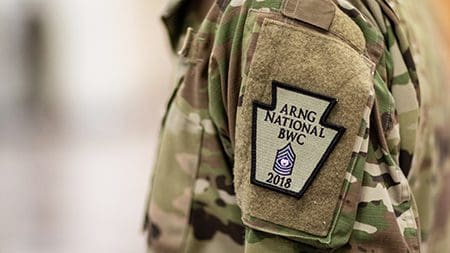 Jahnke was surprised at the level of cooperation between competitors at a high-stakes event.

“Initially when I started this whole competition, I was thinking ‘We never give away our little secrets,’ but it’s not the case,” Jahnke told military journalists during the competition. “At this point, we’ve all talked in the barracks, we’ve all talked about our expectations coming out. Three days ago I didn’t know any of these guys, and now it’s like we’ve been best buds for a while.

“That’s how the Army works,” he continued. “We just grow off each other.”

Sgt. Zach DeValkenaere, Jahnke’s sponsor during this 10-month quest, said he has also grown from the experience.

“As much as it was a competition, it was also a way to work with Soldiers from around the state and nation,” DeValkenaere said. “This allowed me to see a wide spectrum of leadership, ways things are conducted and training techniques that will allow me to mold myself into the best leader I can be.”

Some of that leadership experience came from motivating Jahnke and keeping him focused.

“Being prepared for not just myself, but Jahnke, as well as having to give him the deep talks to keep his head up,” DeValkenaere explained. “It is very easy to slip down a dark hole if an event doesn’t go your way.”

DeValkenaere attends the University of Wisconsin-Stevens Point with Jahnke, which allowed for flexibility in their training schedule between competitions.

“I have seen Jahnke mature [into] a Soldier hungry to learn all that he can and strive to be the best future leader he can,” DeValkenaere said. “It has been a long but fun journey.”

“The toughest part of this competition was definitely finding it within myself to keep pushing as hard as I can, even when it was so easy to fall into the mentality of, ‘Why am I trying so hard?’” Jahnke explained. “It quickly becomes as much a mental fight as physical.”

The experience both Jahnke and DeValkenaere gained from several Best Warrior competitions will serve them well as Guardsmen as they fulfill their dual role as Wisconsin’s military first responder, as well as the Army’s primary combat reserve.

Jahnkes said his favorite experience was the ruck march — a road march wearing a full military backpack — through Gettysburg National Military Park, and the chinook helicopter ride there.

“Rucking through the battlegrounds gave me more motivation to drive on than I could have ever asked for,” he said.

Jahnke said he looks forward to returning to his unit, armed with the knowledge and experience gained from competing against some of the best Soldiers in the nation, and would like to attend Basic Leadership Course in the coming months. DeValkenaere said he looks forward to continue working with Jahnke back at their home unit. And though the Best Warrior quest may have ended, their tandem might yet continue.

“Sgt. DeValkenaere and I are beginning training for a potential attempt at Ranger school,” Jahnke revealed. “We believe we started this together — now we are going to finish this together.”