32nd Division makes a name for itself on the battlefield 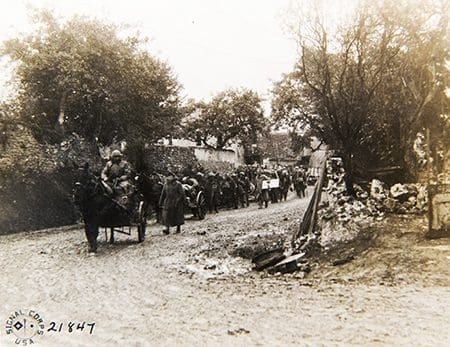 32nd Division Soldiers from the 1st Battalion, 127th Infantry Regiment, pass through the village of Roncheres, France Aug. 2, 1918 on their way to the front line. The previous day the 127th had suffered serious losses storming German machine gun positions. They were relieved, in order to rest, but owing to the rapid German retreat were forced to march to more advanced positions. U.S. Signal Corps photo by Cpl. A. H. Hansen

One hundred years ago this week, the 32nd Division’s battlefield prowess earned the Wisconsin and Michigan National Guard unit the first of two enduring nicknames.

The Second Battle of the Marne — Germany’s last major offensive on the Western Front — had begun July 15, 1918, and after absorbing some punishment and allowing the Germans to expend their energy, the Allied counteroffensive launched July 18, prompting a German retreat by July 20.

According to Lt. Col. Byron Beveridge’s Historical Sketch of the Wisconsin National Guard, the 32nd Division — having finished six weeks in the Alsace campaign — was awash in rumors it might be sent to Italy or to the British front. The division boarded trains in Alsace, and would complete their journey to Chateau-Thierry by truck. There the division reported to the 38th French Corps on July 26. The division was leaving behind the trench warfare of Alsace for open-field fighting. 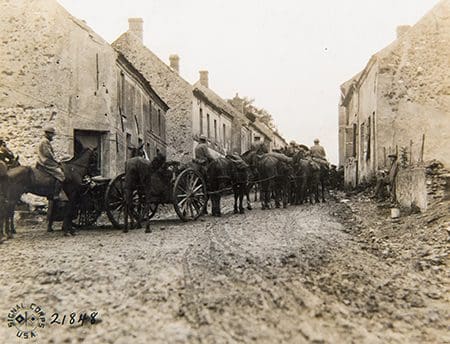 32nd Division Soldiers from the 120th Field Artillery Regiment passing through the village of Roncheres, France Aug. 2, 1918 in pursuit of retreating German forces. This artillery regiment changed positions three times in 24 hours and were obliged to move forward each time without firing. U.S. Signal Corps photo by Cpl. A. H. Hansen

“Wisconsin troops received their baptism of fire in open warfare,” Beveridge wrote, “when they took up the big push on the ‘big front.’”

Division commander Maj. Gen. William Haan assumed command of the sector from the 3rd Division July 30, and determined that the 32nd needed to take Hill 230, a commanding high ground overlooking the strategically important town of Fismes from the Germans.

The division’s 64th Brigade — consisting of the 127th and 128th Infantry — moved to the front line July 29, on the Ourcq River near Roncheres, to relieve the 3rd Division. The next day, the 63rd Brigade — made up of the 125th and 126th Infantry — relieved the 28th Division, and on the final day of July 1918, both brigades fought side-by-side in a push for Hill 230. 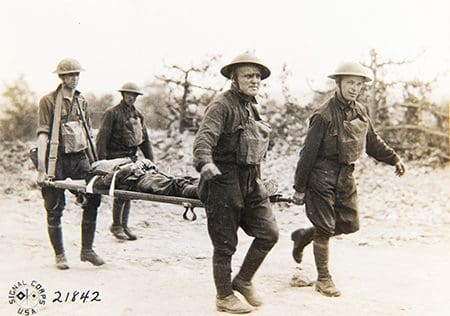 With the tide turning, the 6th French Army commander ordered his forces to advance on the Germans beginning Aug. 2. The 32nd Division gained six kilometers that day, and another seven kilometers on Aug. 3, where it met stronger German resistance.

“In those eight days some of the best German divisions put up a terrific fight to stem the advance,” Beveridge wrote.

The following day, the 127th Infantry moved on the town of Fismes, while the 63rd Brigade advanced on the critical railroad yard on the banks of the Vesle River. The 127th suffered horrific losses but managed to capture Fismes that night, while the 63rd took the railroad yards and temporarily patrolled across the Vesle River. According to Beveridge, 777 men were killed or died of their wounds, 12 were missing in action, six died from other causes, 1,153 severely wounded or gassed, 2,009 suffered minor wounds or gas injuries, and eight taken prisoner. 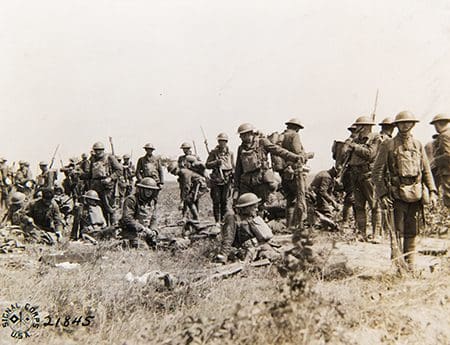 “Captains were commanding battalions, non-commissioned officers commanding companies” Beveridge wrote, “but the companies carried on even though there were no officers.”

Capt. Gustav Stearns, the 127th Infantry Regiment’s chaplain, wrote to his home congregation in Milwaukee about the more active battlefield.

“Suddenly, from in front of us, over in the direction where we knew the Germans were located, we saw skyrocket signals and flares go up and then the boom-boom-boom of artillery, and then the zip-zip-zip multiplied a thousandfold of the machine guns,” Stearns wrote. “And then some shells came crashing over toward us and someone yelled ‘GAS!’” 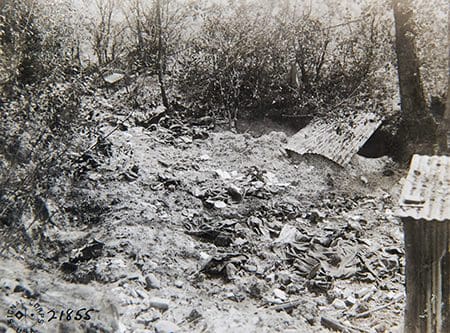 A German machine gun nest captured by 32nd Division Soldiers from the 125th Infantry Regiment. The Germans were entrenched in a stone quarry overlooking several miles of terrain to the south. To reach this position, Soldiers from the 125th advanced as skirmishers across several kilometers of wheat fields. U.S. Signal Corps photo by Cpl. A. H. Hansen

Two men from the 127th Infantry earned Distinguished Service Crosses in the assault on Fismes. 1st Lt. Ray Dickop of Beloit, Wisconsin was shot in the head, body and legs. Before dying of these wounds, he received orders for another assault, and led his unit — Company L — in the charge until he fell dead. One of his Soldiers, Pvt. Wilford Lloyd, lost his pistol when he was wounded in the same attack as Dickop. He crawled over and took a dead Soldier’s rifle before joining a squad in attacking a fortified stone wall near the outskirts of Fismes. 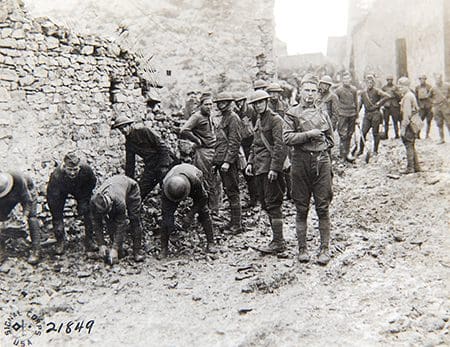 The 32nd Division’s 107th Engineer Regiment clearing the streets of Cierges, France of debris Aug. 2, 1918. Engineers quickly cleared the wreckage, up to three feet deep in some areas, to allow troops, artillery and supply trains to pass through. U.S. Signal Corps photo by A. H. Hansen

“The Germans had spared no effort in making this city and surrounding country as impregnable as science could make it,” Schmidt wrote. “Huge stores of ammunition and engines of destruction were located here and preparations made to withstand the most formidable attack.”

Haan provided an account of his division’s attack on German positions.

“The woods were covered with machine guns but our troops took it by storm and bayonetted the Germans in the woods,” he wrote. “The bayonet fight took place at 11 at night and lasted for a half-hour. So far as I can ascertain, not a shot was fired and the Germans were completely routed.

“More than 30 of them were buried at this spot,” Haan continued. “Here no prisoners were taken.”

During the bloody fighting on Aug. 4, General Pairron de Mondesir, 38th French Corps commander, was observing American troops in combat against the Germans. When he heard the 32nd had taken all the German strong positions to the north of the Ourcq and had dug in and were holding their ground, he exclaimed, “Oui, oui, les soldats terrible, tres bien, tres bien!”

“It was the only time during the war that a French commander specified what American division he wanted to assist him,” Beveridge noted.

The nom-de-guerre was made official in a citation following the battle at Juvigny, and the 32nd Division was the only American division given a nickname by an allied nation during the war.

The 32nd’s more famous nickname, the Red Arrow, would have to wait until after the armistice. While training at Camp MacArthur, the division’s symbol was the number 32 in a circle, and the division’s nickname was “Iron Jaw.” However, Haan decided to commemorate the division piercing the Kriemhilde Stellung, and chose a red arrow bisected by a horizontal line.