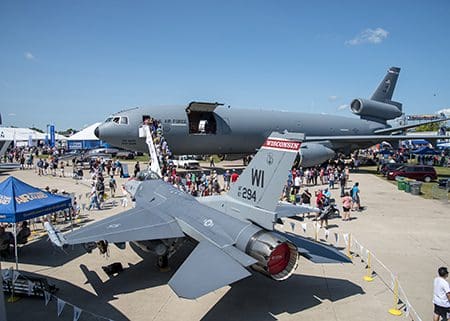 An F-16 Fighting Falcon, with the 115th Fighter Wing, and a KC-10 Extender, from Travis Air Force Base, Calif., sit at EAA AirVenture’s Boeing Plaza in Oshkosh, Wis., July 28 for people to view. AirVenture is one of the largest aviation celebrations in the world hosting more than 500,000 aviation enthusiasts from 80 countries. 115th Fighter Wing photo by Airman Cameron Lewis

OSHKOSH, Wis. — More than 30 citizen Soldiers and Airmen with the Wisconsin National Guard participated in EAA AirVenture here July 23-29, to help protect and maintain Department of Defense assets that were on display at the air show.

Lt. Col. Dave Hellekson, the lead coordinating officer for EAA and the chief of wing intelligence at the 128th Air Refueling Wing in Milwaukee said that Wisconsin Army and Air National Guard provided critical security support to the more than 30 military aircraft on site during the event.

Soldiers from the Milwaukee-based 32nd Military Police Company, and security forces Airmen from the 128th Air Refueling Wing and the 115th Fighter Wing in Madison, Wisconsin, were on hand for security purposes along with aircraft maintenance personnel, fire fighters and a variety of recruiters, Hellekson said. Airmen from the Illinois National Guard’s 183rd Security Forces Squadron out of Springfield, Illinois also assisted. 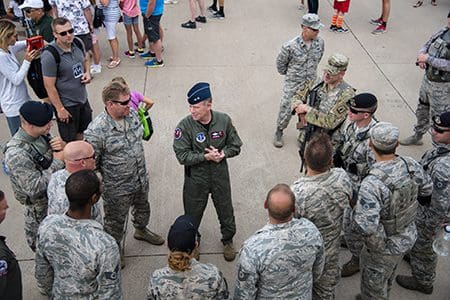 Having a Wisconsin National Guard presence at events like EAA AirVenture is important for a variety of reasons, according to those who supported the mission.

“First, it allows civilians the opportunity to see what their hard-earned tax money is paying for as well as seeing some of the capabilities our military aircraft can provide, which ultimately builds support for Department of Defense programs,” said Senior Master Sgt. Anthony Harvey, the superintendent of the 128th Air Refueling Wing’s security forces. “Second, from a resource protection point of view, security forces is responsible for protecting U.S. Air Force protection level resources, which include the U.S. Air Force aircraft displayed at EAA. Moreover, the security team at EAA also provided an extra set of eyes to assist with EAA Security and Local Law Enforcement when there was a missing person reported or when crowd control was need to move aircraft in and out of the plaza.” 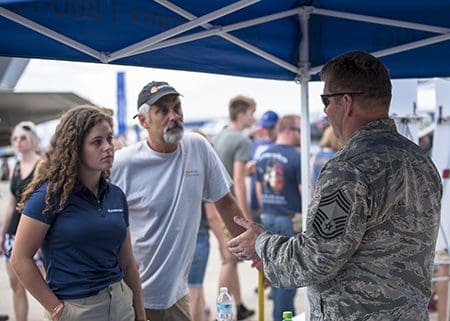 Air Force Chief Master Sgt. Thomas Egstad, the noncommissioned officer in charge of wing safety at the 115th Fighter Wing in Madison, Wis., talks to a potential recruit interested in a nursing career field at EAA AirVenture in Oshkosh, Wis., July 28. EAA is a very rich environment for recruiting as there are more than 500,000 aviation enthusiasts from around the world that attend. 115th Fighter Wing photo by Airman Cameron Lewis

With the assistance of the Army National Guard military police, this year has truly been a joint operation,” said Master Sgt. Matthew Parco, the security forces flight chief for the event and chief of information protection for the 128th Security Forces Squadron in Milwaukee. 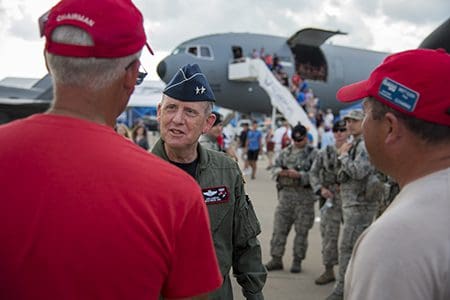 “Being located within the same state as the event makes it easier for our maintainers to bring the equipment they need to operate in an environment like this,” said Master Sgt. Adam Olena, a crew chief with the 128th Air Refueling Wing.

While the aircraft that flew in from out of state had their flight crews with them, the only people on the ground to handle those aircraft were from the 115th and the 128th.

The maintainers were in charge of handling all federal aircraft present, which included a C-5 Galaxy, F-35 Lightning II, KC-10 Extender and several other fighter aircraft from all branches of the military. 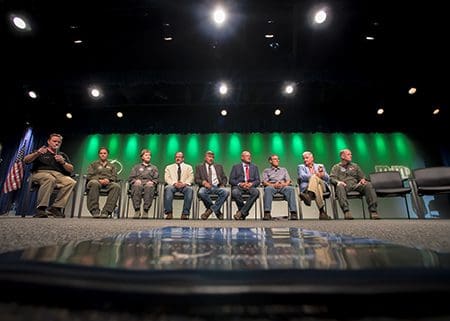 “You can’t defend the country with just active duty personnel,” Dunbar said. “Leaders of the Air Force have long recognized the value of both the Guard and reserve components, and the quality of the men and women we share with employers outside the military”.

Participating in the event gave military members the opportunity to interact with the community and showcase the armed forces in a positive way.

“This event was a great experience to be a part of,” said Senior Airman Alex Lopez, a security forces member with the 115th Security Forces Squadron. “A lot of people had an interest in learning about what we do and the aircraft we have.”

With a variety of military aircraft and personnel present, the event brings both military and civilian aviation enthusiasts together.

“Having the Air Force and other military aircraft here is truly invaluable,” said an EAA member that toured the KC-10 Extender here. “This is gigantic as it generates a love for the aviation community and the military.”