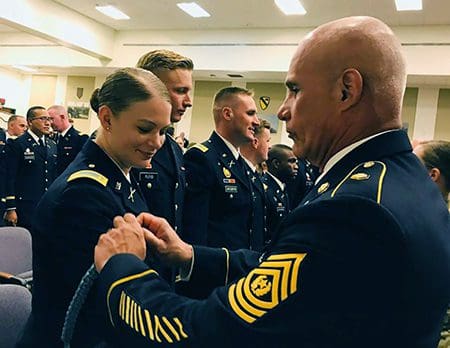 When she enlisted into the Wisconsin Army National Guard at age 17 in 2006, 2nd Lt. Britney Fischer never imagined that she’d make history as the state’s first female infantry officer, but after successfully completing the infantry basic officer leader course at Fort Benning, Georgia, in July she officially earned the coveted blue cord that signifies she is a full-fledged member of the infantry.

Now assigned as a platoon leader with Company A, 1st Battalion, 128th Infantry in Menomonie, Wisconsin, Fischer, a Sun Prairie, Wisconsin resident, is ready for the challenge. But she doesn’t see herself as “the first female” or someone who is breaking down barriers. She sees herself as another young platoon leader learning how to lead troops and nothing more.

But still, she understands that her ascent into the ranks of the infantry, a branch of the Army closed to women until two years ago when the Army opened all positions to both genders, is significant.

“This is just different,” she said. “It’s good though. I don’t love attention, but the cool thing is I’ve already had females come up to me and say, ‘what you’re doing is inspiring to me.’ And that inspires me. That’s incredible to just have random people come and tell me that.” 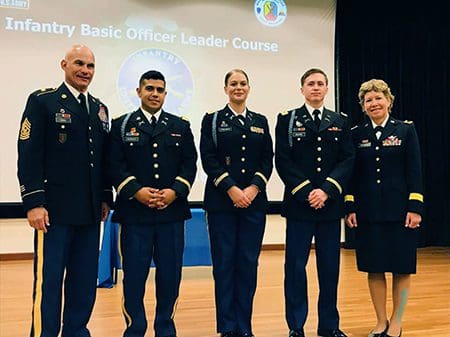 Fischer first enlisted in 2006 and then deployed to Iraq with the 829th Engineer Company in 2009-10 with the 32nd “Red Arrow” Infantry Brigade Combat Team.

She held a number of different positions in different units ranging from chemical to mortuary affairs and finance positions and made staff sergeant before deciding to pursue a career as an officer through the Wisconsin Army National Guard’s Officer Candidate School at the urging of some of her mentors.

“I didn’t really know what I wanted to do after that until my previous boss, Chief Warrant Officer 3 Anne Schoenemann suggested I’d be a good officer,” Fischer said. “So I entertained the idea, applied to OCS and got in.”

About halfway through the OCS process, she started considering the possibility of pursuing infantry as her branch because she enjoyed the physicality of the light infantry tactics taught to soon-to-be officers at the Wisconsin Military Academy. Her OCS commander, Lt. Col. Aaron Freund, now Fischer’s battalion commander in the 1st Battalion, 128th Infantry, played a key role in encouraging and supporting her interest in a career in the infantry. 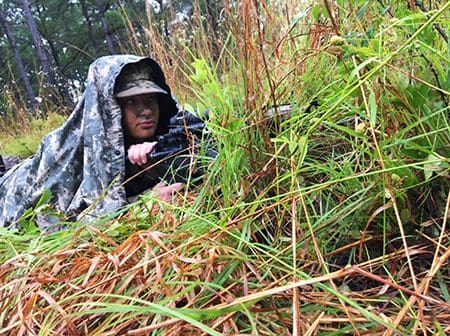 “At the time of branch selection in OCS, 2nd Lt. Fischer inquired if I thought the infantry was a good fit for her, and if she should put it down as her number one selection,” Freund said. “My guidance to her was, ‘You can be a great leader in any branch, but I can’t make this decision for you. Now, if you want to challenge yourself and earn the opportunity to lead Infantry Soldiers, you must never quit, and always give your best to them even when times get tough. It’s the attitude that defines you, to keep pushing yourself to be better and maintaining the will to succeed. If you have the right attitude and grit, then the infantry is a fine branch for selection.’”

Fischer ultimately selected the infantry and was assigned as a platoon leader in the 128th.

She graduated from OCS in September 2017 and reported to her new unit in October, where, at the time, she was the lone female Soldier before she left for the infantry basic officer leader course in March 2018. She was one of just eight women in her class of 140. Her company in Menomonie has since added two female Soldiers in the unit’s supply section and another in a signal role, but Fischer simply aimed to embrace her new role as a platoon leader.

“It was interesting,” she said of arriving at her unit. “I think that male or female, to be in the infantry requires the right mindset and personality, you have to be able to operate as a team regardless of personalities and personal differences. In the end, we all just want to accomplish the mission to the best of our abilities.”

She returns to her unit after completing infantry school as a fully trained officer, and despite the lack of other female Soldiers in the unit, she said her unit has welcomed her with open arms. Just as important, leadership both at her basic officer leader course and here in Wisconsin have been incredibly supportive, she said.

“That’s the best part,” she said. “There is so much support from leadership here and then down at (infantry school) it wasn’t like I was treated any differently. They gave you the same standards as everybody else, and they treated you like everybody else, and it was an awesome experience.”

Ultimately, that’s all Fischer wants – to be treated like any other platoon leader.

She doesn’t see herself as someone who is breaking down barriers, except for those in her own mind.

“But I did break down a lot of my own mental barriers, a lot of blocks and I did a lot of things that I didn’t realize I was capable of doing,” she said of completing infantry school.

“You are put in situations during field training exercises that pushed your mental and physical capacity to areas you didn’t know possible,” she said, noting the challenge of carrying a rucksack that at times, can be anywhere from 80- 100 pounds depending on the role you fill on missions. During the weeks they did small unit tactics and patrols, she was completing multiple missions in the elements with little food or sleep.

“I was in the role of ammo bearer during several of those missions,” she said. “That’s an extra 800 rounds of blanks you carry in addition to the other equipment your squad divides out for that mission. Ruck movements seemed to last anywhere from 800 meters to 3 kilometers, through rough terrain, day or night. I was worn down physically and just kept telling myself to make it to the next day. I would say that if any barriers are being broken down for females, it’s that the standards don’t change and we can perform this type of duty.”

Male or female though, everyone faced the same challenges and each dealt with it in their own way, she said.

“You know that when you finally get a chance to sleep, but realize that when you wake back up it’s going to be raining and cold, and you’ve got to put that wet uniform back on and do it all over the next day,” Fischer said. “That was mentally tough for me to deal with, but I think what kept me going is the people around you and knowing that I’m going to have to make my Soldiers do this, and there’s nothing that they’re going to do that I won’t do. Everybody around you is dealing with the same thing and you push through it together. In all things, you simply have to have the mindset of, ‘I can do this and I don’t quit.’”

That’s the sort of mentality that Fischer and her other fellow platoon leaders and Soldiers must have as they go about preparing themselves and their Soldiers for the National Guard’s no-fail dual-mission as the Army’s primary combat reserve. They simultaneously must be ready to serve here at home in times of emergency as Wisconsin’s first military responder.