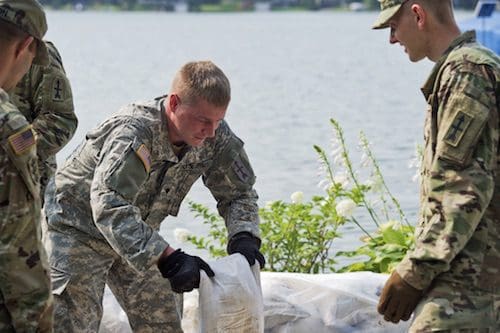 “There is a potential for more rain, and we are helping the city of Madison prepare to protect
homes,” said Spec. Daniel Kim, a Soldier with 1st Squadron, 105th Cavalry, assisting with filling sandbags. 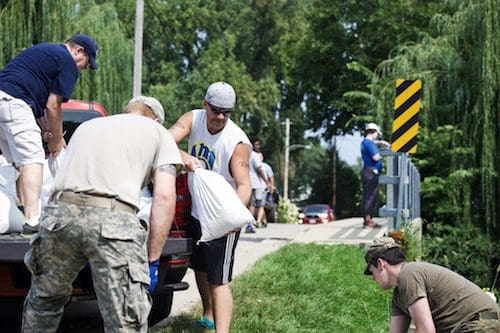 The National Guard troops, from Madison’s 1st Squadron, 105th Cavalry, were called to state active duty to provide additional manpower and assistance to municipal crews as Madison braces for additional rainfall and the potential for more flooding throughout the area. The National Weather Service predicts the area could potentially receive additional rainfall over the course of the next several days.

“It’s not every day we get to do something where we live,” said First Lt. Skylar Croy, a Soldier with the 105th.

Croy lives within walking distance of areas affected by flooding. He said it felt great to be able to help members of his community. He added that all of the Soldiers assisting with sandbagging from the 105th volunteered to help.

“That is really special when you have Soldiers who will step up and help when needed,” Croy said.

Spec. Daniel Moyer, another Soldier with the 105th, said he was proud of the outpouring of support from members of the community who passed by as the Soldiers were working.

“It’s great to see the amount of community effort that’s coming out, more than just the Guard,” Moyer said. He added that neighbors and people passing by would stop and spend hours trying to help their neighbors.

“It’s a privilege to serve the citizens of Wisconsin in their time of need,” said Brig. Gen. David O’Donohue, Wisconsin’s deputy adjutant general for civil support. “Our guard members were enthusiastic and feel great about helping those in their local community.” O’Donohue assisted Gov. Walker, Soldiers, and citizens with filling sandbags Saturday morning.

The National Guard fulfills a unique dual-mission as both the primary combat reserve of the Army and Air Force, but also as the first military responder here in the state during times of emergency. Last fall, the Wisconsin National Guard deployed Soldiers and Airmen to Florida, Puerto Rico and the U.S. Virgin Islands to assist with hurricane recovery efforts, and Soldiers responded on multiple occasions to flooding last summer in Monroe County and Burlington, Wisconsin.