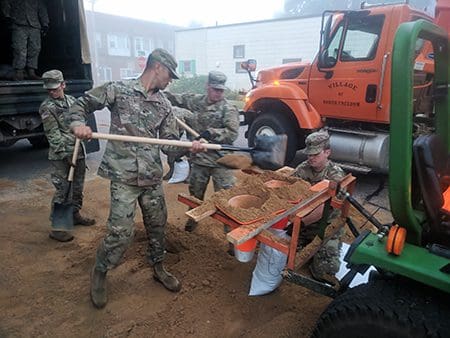 The Soldiers, from the Portage, Wisconsin-headquartered 132nd Brigade Support Battalion, arrived early Aug. 30 to fill, stockpile and lay sandbags after the National Guard received a request for assistance from local authorities.

The Wisconsin National Guard concluded its sandbag mission in Madison Aug 29, where as many as 85 National Guard troops were called to state active duty to help municipal crews there fill and emplace nearly 7,400 meters of sandbags. Wisconsin Army and Air National Guard troops have also transported more than 800,000 empty sandbags throughout the state to staging areas to ensure they were in position for local municipalities to use. 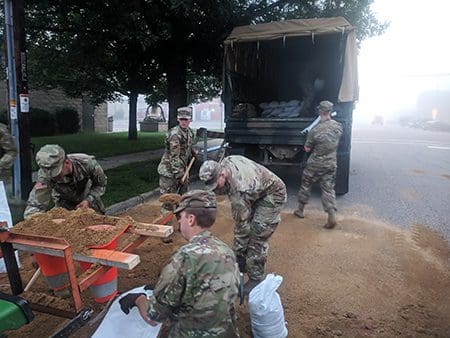 “Ideally it would be nice if none of us were here, because that would mean there were no incidents,” said 1st Lt. Bryce Bobula, the officer in charge of the National Guard troops in North Freedom. “But it’s definitely nice to be utilized to help people out. This would be a pretty terrible situation if they didn’t send people out, especially in Madison and here to deal with all of this and help as much as we can to reduce the flooding.”

Bobula said the water in North Freedom continued to rise as the National Guard, local volunteers, firefighters and other municipal workers emplaced sandbags this morning. 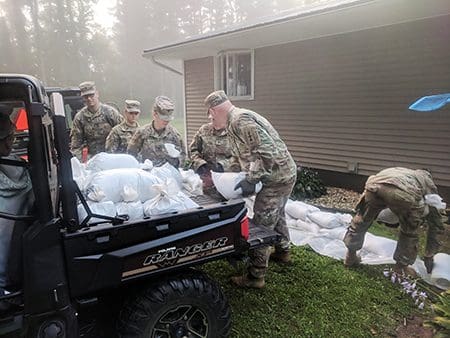 “We were planning to be out at 9 a.m., then at about 3:30 or 4 a.m. this morning we got the call that they were going to need us out here quicker because the water was coming in significantly quicker than expected,” he said.

The troops were on the ground working by 6 a.m. and concluded their mission in North Freedom by approximately noon before heading to Baraboo to conduct further sandbagging operations there.

Multiple rain events soaked the state over the past ten days causing local lakes and waterways to swell with floodwaters. Gov. Scott Walker signed Executive Order 303 declaring a state of emergency for Dane County last week, which authorizes the adjutant general to call elements of the National Guard to state active duty, as he deems necessary. The governor subsequently signed Executive Order 306, which expanded the state of emergency declaration to cover the entire state after additional heavy rains impacted the state this week.

The state emergency operations center remains at an elevated level, and officials with Wisconsin Emergency Management are urging citizens affected by the flooding to contact 2-1-1 to report damage to residences. For the latest information on the flood response, visit www.ready.wi.gov.