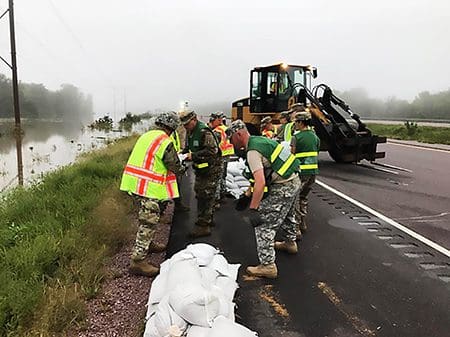 Approximately 75 Soldiers from the Portage, Wisconsin-based 132nd Brigade Support Battalion mobilized to state active duty Sept. 2to sandbag on Interstate 90/94 near Wisconsin Highway 33, where they worked overnight and into the morning of Sept. 3. Thirty-two Soldiers remained on duty Sept. 4 to add additional sandbags to the interstate and fill more sandbags for state use in Wyocena, Wisconsin. 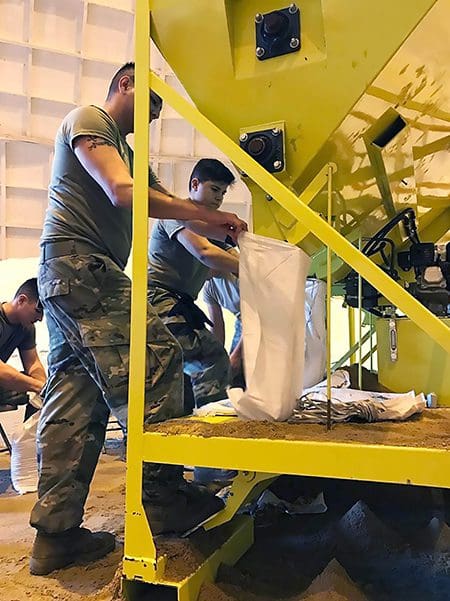 That state active duty mission was transferred today (Sept. 5) to the 1st Battalion, 120th Field Artillery, who will supply at least 50 Soldiers.

The 132nd Brigade Soldiers who worked filling and laying sandbags through the night Sept. 2-3 were grateful for the opportunity to serve their state in a time of emergency.

“Right now we’re looking at huge flooding that we haven’t seen in decades, so to be able to come out here and serve our communities, which is what most of us signed up for — it’s what I signed up for,” said Spc. Michael Johnson, from Company D, 132nd Brigade Support Battalion out of Madison, Wisconsin. “It really helps fulfill the desire for why I enlisted into the National Guard.” 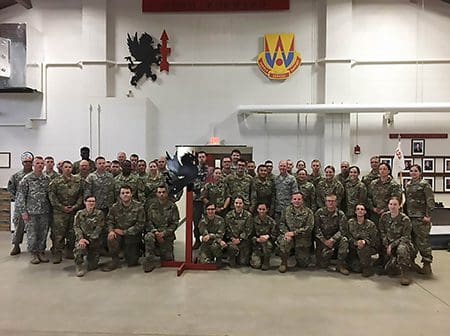 “It’s huge,” he said of the impact the Guard had thanks to its efforts. “We go through all this training like basic and after you’ve completed your initial training. You’re constantly going to school, and it feels good to have it actually pay off and have it make a difference.”

While laying sandbags is unglamorous, backbreaking work, the Soldiers were quick to recognize the importance of their mission to the state and its citizens.

“With the roads being flooded or potentially flooded, it could cause a huge impact to everything as far as families travelling for a holiday weekend trying to enjoy their weekend, to businesses and truck drivers trying to deliver goods,” said. Sgt. 1st Class Jason Mattke, the readiness noncommissioned officer for Company E, 132nd Brigade Support Battalion in Antigo, Wisconsin. 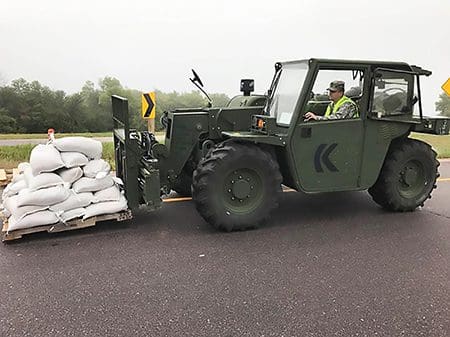 “It shows that we’re ready to help the state any time of the day,” he added. “It’s a holiday weekend and we’re here. It shows that our readiness is there. All we have to do is be called upon by any city or county for whatever needs to be taken care of.”

Within hours of receiving a request for assistance from the Wisconsin Department of Transportation Sept. 2, Wisconsin National Guard troops were on the ground filling sandbags. By the morning of the Sept. 3, they had filled more than 10,000 sandbags and emplaced approximately 8,500 along the interstate to keep the highway open on Labor Day — annually one of the state’s busiest driving days. They went on to fill and emplace more Sept. 4, and the Guard remains on standby ready to assume additional missions in the event that local authorities need their assistance. 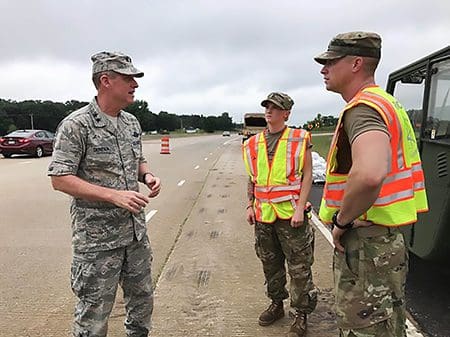 The Wisconsin National Guard has conducted a number of sandbag missions throughout the state in the past two weeks since torrential rain began falling across large swaths of southern Wisconsin. The Guard concluded a sandbag mission in Dane CountyAug. 29, where as many as 85 National Guard troops assisted civil authorities in Monona and Madison emplace nearly 7,400 meters of sandbags. Wisconsin Army and Air National Guard troops have transported more than 800,000 empty sandbags throughout the state to staging areas to ensure they were in position for local municipalities to use since the operation began. The Guard also assisted authorities with sandbagging missions in North Freedom and Baraboo in Sauk CountyAug. 30.

Multiple rain events soaked the state over the past two weeks causing local lakes and waterways to swell with floodwaters. Gov. Scott Walker signed Executive Order 303 declaring a state of emergency for Dane County last week, which authorizes the adjutant general to call elements of the National Guard to state active duty, as he deems necessary. The governor subsequently signed Executive Order 306, which expanded the state of emergency declaration to cover the entire state after additional heavy rains impacted the state this week.

The state emergency operations center remains at an elevated level, and officials with Wisconsin Emergency Management are urging citizens affected by the flooding to contact 2-1-1 to report damage to residences. For the latest information on the flood response, visit www.ready.wi.gov.