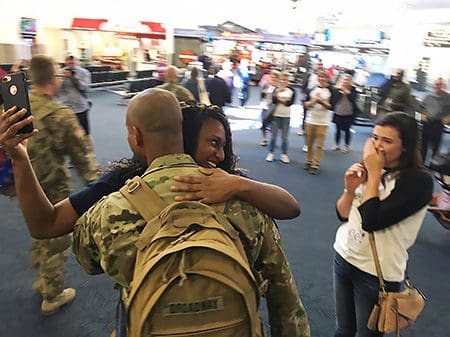 After several months in the Middle East taking military helicopters apart and putting them back together again, perhaps it was fitting that Wisconsin Army National Guard members of Detachment 1, Company B, 248th Aviation Support Battalion returned piecemeal to Wisconsin — arriving on multiple flights to multiple locations.

“It feels great,” Colvin said. “I’m still trying to process the fact that I’m back home and looking back at everything I did and worked through. It’s one of my greatest achievements.” 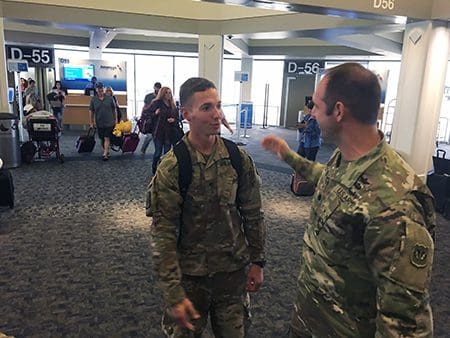 Company B — which included National Guard Soldiers from Iowa, Tennessee and Louisiana — maintained UH-60 Black Hawk and CH-47 Chinook helicopters at Camp Buehring in Kuwait, and at Camp Taji near Baghdad, Iraq, as well as other locations in Iraq. The 248th ASB supported the 449th Combat Aviation Brigade as part of Operations Spartan Shield and Inherent Resolve.

“We touched a lot of different maintenance sections throughout the whole Central Command area,” said Capt. Jared LeFaivre, the officer in charge of the approximately 25 Wisconsin National Guard Soldiers who made up Detachment 1. 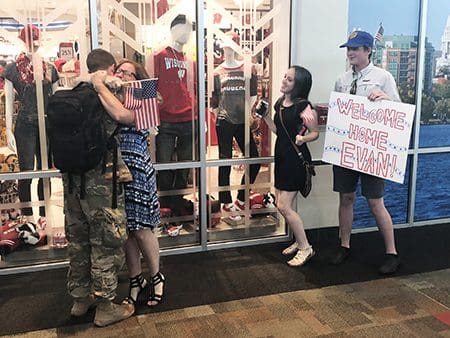 “I can say this without any bias,” he continued. “The Wisconsin Soldiers were probably the best prepared and [most] highly sought after by other elements in our battalion and brigade. If they needed Soldiers, they always seemed to look for Wisconsin Soldiers because of the experience they brought to the table. Their professionalism was unmatched, really — they performed exceptionally well.”

Part of their maintenance mission was phase maintenance, an intense procedure requiring two or three crews per aircraft working around the clock to essentially dismantle, inspect, repair and reassemble the helicopter, as well as install modifications. 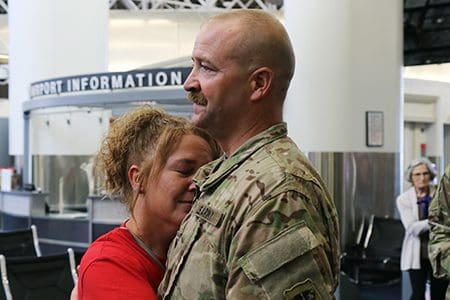 Sgt. Adam Harris, a Soldier with Detachment 1, Company B, 248th Aviation Support Battalion, is embraced by his wife at General Mitchell Internation Airport in Milwaukee Sept. 8 upon returning from a year-long deployment to Iraq and Kuwait. Wisconsin National Guard photo by Sgt. Katie Eggers

The Wisconsin Soldiers also conducted three downed aircraft recovery team missions. LeFaivre noted that none of the helicopters were shot down in combat, but were damaged from “hard landings.” One helicopter had to be recovered in Syria. The team moved the aircraft to Iraq, where it was prepared for shipment to Kuwait.

“We fixed the entire aircraft and got it back into the fleet in a short amount of time,” LeFaivre said. “That was a huge accomplishment, to move an aircraft across two different countries — not flying it, trucking it.”

Besides maintenance, three helicopter pilots were part of Detachment 1, and flew logistics, medevac and transport missions. One pilot helped bring the remains of an Airman who was part of a fatal flight crash in Iraq to Camp Taji. 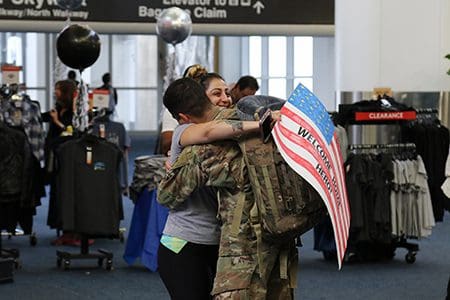 “It was a long deployment, but it was a great experience, especially for my younger Soldiers,” LeFaivre said. “They learned a lot — I learned a lot. Hopefully we made everybody back home proud.”

Concerning long deployments and learning, Spc. Justin White enjoyed a brief reunion with his immediate and extended family at Mitchell International Sept. 8, and then proceeded directly to the University of Wisconsin-La Crosse to catch up on classes, which began earlier that week. His parents moved his belongings into his room on campus while he was still away on orders. 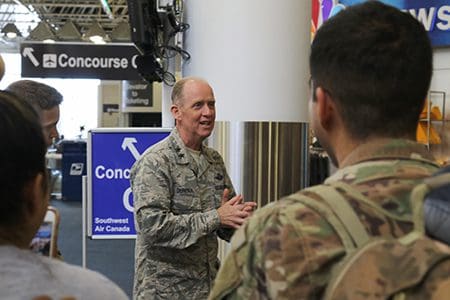 Maj. Gen. Don Dunbar, Wisconsin’s adjutant general, addresses a group of Soldiers with Detachment 1, Company B, 248th Aviation Support Battalion and their loved ones at General Mitchell International Airport in Milwaukee Sept. 8 as the Soldiers return from a year-long deployment to Kuwait and Iraq. Wisconsin National Guard photo by Sgt. Katie Eggers

A friend picked up Sgt. Adeeb Taujoo at Mitchell International Sept. 8 to ferry him to a surprise reunion with his parents.

Spc. Evan Hafenbreadl, a helicopter mechanic with Detachment 1 and a legislative assistant for the Wisconsin State Legislature when not on military status, split his deployment between Iraq and Kuwait and called the experience “eye-opening.”

“The entire culture over there is so different, and it was so cool to experience it,” Hafenbreadl said at Dane County Regional Airport Sept. 7. “Iraq, obviously we didn’t get to go off post and experience a whole lot outside, but in Kuwait we did, and we had more interaction with locals.”

Hafenbreadl’s mother Terri was overwhelmed with happiness at her son’s return.

“I was worried about him — we did a lot of praying,” she said. “It was hard for me, but it was so important for us to support our Soldiers. I’m so proud of him.”

Spc. Jordan Stremke, among the last Detachment 1 Soldiers to return to Wisconsin, said he was anxious, nervous, ecstatic and “really hungry” upon his arrival at Mitchell International Sept. 11.

“I haven’t eaten yet,” the Black Hawk mechanic from West Bend, Wisconsin said. The majority of his deployment was in Iraq.

“Which was great,” Stremke said. “Syria was a lot hotter and more sandstorms, so I’m glad I got to stay where I was.”

“These Soldiers did a remarkable job over the last year keeping the helicopters in theater in Iraq and Syria in the fight,” Strub said. “It’s a critical job and they did fantastic, so you should be proud of them.”

The National Guard simultaneously stands ready to complete its state mission of assisting civil authorities in times of emergency as the state’s first military responder during times of emergency. The National Guard recently completed a series of sandbagging missions in southern Wisconsin communities in the wake of extreme flooding resulting from torrential rains that soaked the region. Last fall, the Wisconsin National Guard deployed Soldiers and Airmen to Florida, Puerto Rico and the U.S. Virgin Islands to assist with hurricane recovery efforts, and Soldiers responded on multiple occasions to flooding last summer in Monroe County and Burlington, Wisconsin.