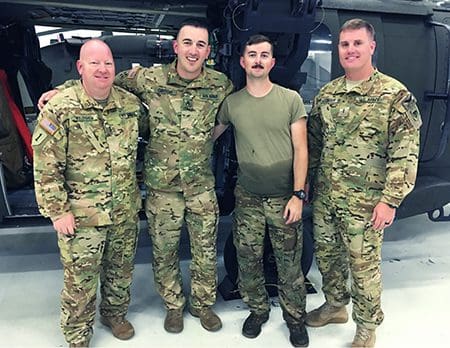 A Wisconsin Army National Guard UH-60 Blackhawk helicopter crew rescued two men stranded in the Eldorado Marsh in the Fond du Lac River Sept. 9 after the men got disoriented on a kayak trip.

The kayakers lost their way in a thick marsh and reached the point of exhaustion before calling 911 to seek rescue. The isolated nature of the marsh and its terrain made a land rescue nearly impossible, prompting local rescue crews to reach out to Wisconsin Emergency Management to seek assistance.

The Wisconsin National Guard was ready and within 90 minutes of receiving the call, had a helicopter in the air. Fifteen minutes later, the West Bend, Wisconsin-based flight crew was hovering over the Fond du Lac area searching for the wayward kayakers, who had cell phone contact with rescue crews on the ground. With sunlight quickly diminishing and the kayakers stranded in a dark marsh, the crew asked first responders to relay a message to the kayakers to turn on their cell phone flashlight.

“As soon as they did that we spotted them immediately,” explained Chief Warrant Officer 4 Jason Wollersheim, the pilot-in-command of the mission assigned to Company C, 1st Battalion, 168th Aviation. “It stands out pretty good when you’re out in a marsh with no other lights around and you’re looking through NVGs (night vision goggles).”

Once spotted, the pilots moved into position over the stranded men and lowered one of the crew chiefs into the marsh using a hoist and a jungle penetrator, also known as a rescue seat. The crew chief, Sgt. Caleb Estenson, quickly realized that the marsh’s surface was not suitable for using the jungle penetrator to extract the two men. The marsh was full of floating bogs, and he plunged right through the surface into chest-deep water before sending a rescue basket to extract the kayakers instead. Using the basket allowed for better weight distribution, which kept Estenson and the kayakers from falling through the bog surface.

The darkness, lack of reference points, floating bogs, cattails and other marsh material blowing across the surface made it difficult to find solid reference points from which the crew could maintain a steady hover over the marsh, according to Staff Sgt. Bobby Gibson, a crew chief and hoist operator from the 168th, said. But the highly skilled crew overcame the obstacles and ultimately extracted everyone safely.

“With our rotor wash, it was actually moving some of those little islands of bog around,” he said. “So it added another layer of complexity that we weren’t anticipating at the beginning. At that point, your training just kind of takes over and you get in the zone, and we adapted on the fly and did what we needed to do.”

Wollersheim, a Fond du Lac native with more than 21 years of flight experience, said it was an honor to give back to the community in which he was born and raised. He also noted that the amount of training and professionalism Wisconsin Army National Guard aviators have gained in recent years on its federal mission as the Army’s primary combat reserve helps the Guard fulfil its state mission as the first military responder here at home. Three of the crew members aboard the flight returned from deployments to Afghanistan less than a year ago, while the fourth returned from Kuwait less than two years ago.

“So we have a high optempo with overseas missions, but in between we do a lot of training and we’re ready to go,” he said.

“I really enjoy actually getting to do my job,” Kramer said. “We train a lot to be responsive, and especially in our own local communities to be able to help out. We often deploy overseas or to other natural disasters for hurricanes etc., but it’s awesome to be able to help out in your own backyard.”

“I don’t think they would have been doing too well had they spent the entire night out there,” he added. “They were happy. They were joyful to get out of there and we were glad to go do it.”

Had the crew been unable to reach the stranded men, the situation could have been a precarious one, given that the two kayakers were wet, exhausted and temperatures dropped into the 40s overnight. According to the crew chiefs, the men were in good spirits, but possibly in the early stages of hypothermia. Thankfully the crew was prepared with warm blankets to begin warming the men en route to the Fond du Lac County Airport, where paramedics were waiting for them.

“I can’t imagine those guys going through last night, because it got cold last night, down into the 40s in the area, so that would have been a rough experience,” Gibson said.

Assuring individual and unit readiness is a point of pride for the medevac crews based in West Bend, Kramer said.

“That’s something that we strive for is maintaining that readiness,” he said. “It’s what we train here to do as medevac. Our mission overseas is 15 minute response times. Granted here in the States, I’m sitting on my couch at home and getting a call to come in and get everything ready, but our unit has a high level of readiness and we pride ourselves on that.”

For Estenson, getting the opportunity to put his training to use and drop into the marsh to assist the stranded men was a rewarding experience. Like his fellow crew members, he has undergone a fair amount of training related to extracting people from various situations, but he never previously had to do an over-water rescue in a real-world scenario or in training.

“You couldn’t really tell what the ground was like in this pond area where they were at,” he said. “But once I started to sink in right away when I first got in there, I was really nervous honestly.”

In fact, according to the Wisconsin National Guard’s senior Army aviation officer, Lt. Col. Matthew Strub, the Sept. 9 rescue is likely the first-ever, real-world hoist extraction a Wisconsin National Guard crew has completed in the state. Wisconsin crews have assisted in extracting people from isolated areas in the past such as in the aftermath of hurricanes or extreme flooding, but never directly from water here in Wisconsin. “The training is universal,” Strub said. “We train for the worst-case scenario so that no matter what mission is sent our way, we’re ready to execute.”Soldiers from the 248th General Aviation Support Battalion based at the same flight facility in West Bend recently returned from a deployment to Iraq and Kuwait.