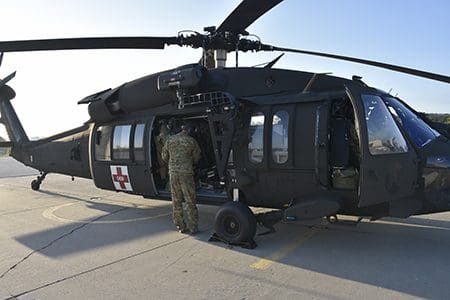 A Wisconsin Army National Guard Soldier assigned to Army Aviation Support Facility 1 in West Bend, Wis. preps a UH-60 Black Hawk helicopter Sept. 14 for movement to Maryland in response to Hurricane Florence where the crews will remain in a standby status to be available in the event that civil authorities request their services. The Department of Defense began staging personnel, equipment and resources in the region to prepare for potential response missions as Hurricane Florence made landfall. Wisconsin National Guard photo by Capt. Joe Trovato

Wisconsin Army National Guard aviators are actively conducting relief operations in support of civil authorities in North Carolina as the state grapples with the fallout of Hurricane Florence.

Gov. Scott Walker authorized Wisconsin’s support after North Carolina requested two UH-60s as well as 12 crew and support staff from the Wisconsin National Guard — approximately half of the contingent of Soldiers that departed from Wisconsin Sept. 14 — via an Emergency Management Assistance Compact, or EMAC, request.

One aircraft embarked on a swift water rescue mission while the other conducted a patient transport mission. Two additional aircraft and 12 crew remain in Maryland in a standby status ready to respond to any additional requests for assistance.

“We want to make sure our fellow Americans have the help and aid they need from our state as they recover from Hurricane Florence,” Walker said.

Four UH-60 Black Hawk medevac helicopters and approximately 24 crew and support staff based in West Bend, Wisconsin departed the Badger State Sept. 14in a training status that simultaneously pre-positioned them in the region in the event that states affected by Florence needed their assistance. The troops now serving in North Carolina in a state active duty status will receive specific missions from civil authorities there. The medevac unit brings an array of capabilities to the response, including medical treatment and transport as well as hoist capabilities that can pull individuals from areas cut off by high water. 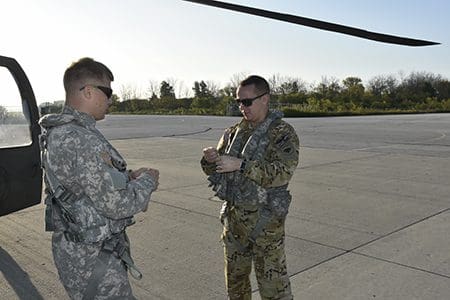 Wisconsin Army National Guard Soldiers assigned to Army Aviation Support Facility 1 in West Bend, Wis. prep a UH-60 Black Hawk helicopter Sept. 14 for movement to Maryland in response to Hurricane Florence where the crews will remain in a standby status to be available in the event that civil authorities request their services. The Department of Defense began staging personnel, equipment and resources in the region to prepare for potential response missions as Hurricane Florence made landfall. Wisconsin National Guard photo by Capt. Joe Trovato

The Department of Defense said more than 7,000 National Guard and active component troops are on duty in the region and ready to assist as needed.

The Wisconsin National Guard stands ready to assist civil authorities with other requests for assistance, as needed, and Wisconsin Emergency Management continues to monitor the situation and review requests to determine if there are other areas in which Wisconsin can provide support.

Serving in times of emergency is one of the National Guard’s core missions, and thousands of National Guard troops are on duty assisting civil authorities in states affected by Hurricane Florence. In fall 2017, thousands of National Guard troops mobilized in support of Hurricanes Irma and Maria. Approximately 650 Soldiers from the 32nd “Red Arrow” Infantry Brigade Combat Team supported civil authorities in Floridalast fall where they provided humanitarian relief, security, and traffic control support to communities. Blackhawk medevac crews also deployed to the U.S. Virgin Islandslast fall to transport patients in need of medical care to health care facilities, and Airmen from the Wisconsin Air National Guard deployed to Puerto Ricoto assist in re-establishing communications on the island and provide mass feeding capabilities to first responders and civilians.

A West Bend-based crew also recently pulled two stranded kayakersto safety from a marsh near Fond du Lac, Wisconsin, andin the summer of 2016, they also rescued a member of the Bad River Reservation in need of kidney dialysis when extreme flooding cut off the reservation from land routes.