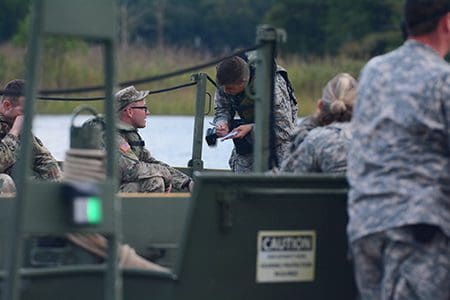 Gov. Scott Walker cleared the way for the troops to provide support when he signed Walker issued Executive Order 308 Sept. 14, which authorized Wisconsin’s adjutant general, Maj. Gen. Don Dunbar, to call elements of the Wisconsin National Guard to state active duty to assist civil authorities in response to Emergency Management Assistance Compact – or EMAC – requests. EMAC requests are the means through which states can request emergency assistance and resources from other states. The South Carolina National Guard requested additional public affairs assistance from other states to help communicate to the public effectively.

After less than 24 hours’ notice to pack their bags and begin their more than 16-hour drive, the team of one Soldier and three Airmen arrived safely in South Carolina, and were immediately sent to different areas of the state to ensure full coverage of the areas in danger.

“We hit the ground running,” said Sgt. Kati Stacy of the Wisconsin Army National Guard’s 112th Mobile Public Affairs Detachment. “Within 15 minutes of arriving in Bucksport I was called out to report on a mission. The search and rescue teams were rescuing local citizens, along with dogs and horses from flooded areas.”

Stacy was in the brunt of the action.

“It was heartbreaking to see the devastation and how this flooding had impacted so many lives,” she said. “I was proud to see the Soldiers working alongside other organizations to provide as much aid as they could give.” 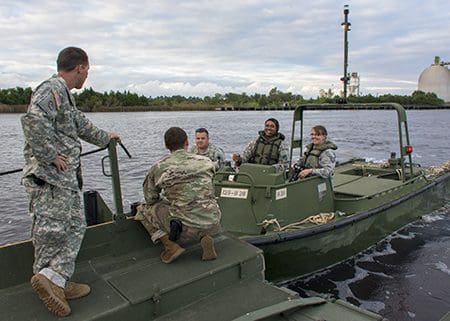 The Bucksport area was hit the hardest. Floodwaters filled their streets and homes. Some cars were left completely under water. Even the water on the highway was deep enough that the team needed boats to perform their missions.

“Some people who chose to stay didn’t have the money to get out, and they were too proud to depend on available resources,” Stacy said.

Others just chose to stay. They didn’t want to leave their homes.

“The teams I went out with did wellness checks and got their contact information,” Stacy said. “That way, even if they chose to stay, they could make sure the citizens were okay.”

“We didn’t have any rescues being made, but I did have an opportunity to see what goes into flood preparation,” he said. “All the Soldiers and Airmen came together to make sure water barriers, sandbags and floating bridges were in place for the projected flooding.”

The teams worked 24/7 missions to ensure main roadways and bridges remained operable, even in the event of a major flood.

“It was crazy to see the work that goes into preparing for a natural disaster like this,” Lewis said. “The crews were working nonstop, for days on end.”

The Wisconsin public affairs team worked hard until the end. They all expressed their gratitude having the opportunity to support the coverage of life-saving missions.

“The support we were able to provide to our counterparts — many of whom had been on scene since before Hurricane Florence hit the coast — was definitely appreciated,” Stacy reflected. “They had been covering the events and aftermath of the hurricane for more than two weeks, and we could see the exhaustion on their faces.”

After a week of non-stop action, the Wisconsin team is also ready to go home.

“We couldn’t have asked to be put on a better mission,” Stacy said. “The experiences and knowledge from this assignment will be something we take with us forever, and the friendships we gained with our public affairs counterparts are priceless.”

The group’s return caps another chapter in the Wisconsin National Guard’s long history fulfilling its mission as the first military responder here at home in times of emergency. Wisconsin Army National Guard UH-60 Black Hawk medevac units based out of West Bend recently returned from North Carolina where they assisted in the wake of Hurricane Florence as well.

In fall 2017, thousands of Wisconsin National Guard troops mobilized in support of Hurricanes Irma and Maria. Approximately 650 Soldiers from the 32nd “Red Arrow” Infantry Brigade Combat Team supported civil authorities in Florida where they provided humanitarian relief, security, and traffic control support to communities. Blackhawk medevac crews also deployed to the U.S. Virgin Islands to transport patients in need of medical care to health care facilities, and Airmen from the Wisconsin Air National Guard deployed to Puerto Rico to assist in re-establishing communications on the island and provide mass feeding capabilities to first responders and civilians.

The Wisconsin Guard has also been busy assisting civil authorities here in Wisconsin. Hundreds of Guardsmen assisted with sandbagging efforts after torrential rains soaked southern Wisconsin in late August and early September, and Soldiers responded on multiple occasions to flooding in summer 2017 in Monroe County and Burlington, Wisconsin.