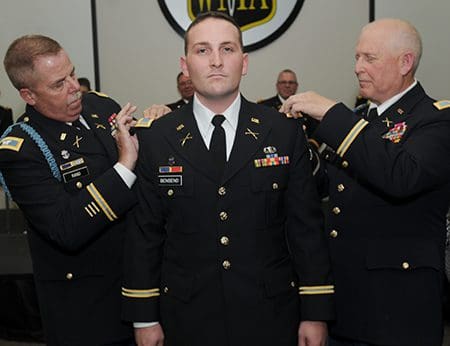 “I want to congratulate each and every one of you, said Brig. Gen. Joane Mathews, Wisconsin’s deputy adjutant general for Army. “This is going to change your life. I look forward to working with you in the future.

“It’s extremely important because of the courses that it provides,” Mathews said of the 426th. “The instructors are all extremely professional, extremely proud of what they do and very knowledgeable in their field.”

“As the 426th Regiment commander, it is my privilege to congratulate these officers and warrant officer candidates,” said Col. Ryan Brown. “These experiences will have a profound impact on you, and will shape you forever.”

The 426th trains hundreds of Soldiers from active, Guard and Reserve components every year from virtually all over the country in field artillery, unit movement officer deployment course, OCS, WOCS, and Joint Fires Observer (JFO) course — just to name a few.

“Our mission is to train Soldiers in the One Army School System (OASS),” said Brown.

OASS is the new standard for relevant and realistic training for both Active Duty and reserve component Army courses.

A native of Wisconsin Rapids, Brown has commanded the 426th for the past year, and already has overseen more than 1,000 Soldiers trained during his command.

The RTI helps to keep Guard members from Wisconsin and other states, active, and Reserve Soldiers from across the country prepared to serve as the nation’s primary combat reserve and ready to go in the event of state or national emergencies by building readiness through its many course offerings.

Lt. Col. Kathleen Adamson, commander of 2nd Battalion, 426th RTI, emphasized some of the ways that the unit is reducing costs for the courses it provides compared to courses offered at active duty schools, and the rest of the Army is paying attention.

“You don’t take them away for as long, and you don’t have to spend as much money sending them out and bringing them back,” she said of Soldiers attending courses at the RTI. “You can do it right here. Then you can still go to drill weekends and then come here for schooling on opposite weekends.”

The unit staffs its courses with instructors from the Wisconsin National Guard. Adamson emphasized that the philosophy of the 426th has evolved into a two-fold training opportunity where Guard members can join the 426th, become instructors, and with that experience become experts. Then they can take all of the knowledge they have gained as instructors back to their units in Wisconsin, building further readiness across the force.

With regular deployments across all components of the Army, the need for training increases and the 426th offers critical deployment training that is now a requirement for all U.S. Army deploying units.

“As the [operations tempo] increases and there’s the potential for overseas deployments, units can take advantage of the courses that we offer here,” Adamson said.

Master Sgt. Carl Morabito, chief instructor for the 2nd Battalion, 426th RTI, stressed that serving as an instructor at the 426th should not be seen as a long-term duty assignment but rather as a broadening assignment that sets the stage for long-term career success in units across the state.

Broadening opportunities are a crucial part of career enhancement in the Army, and the 426th offers some of the best opportunities for Soldiers, especially Soldiers in the Wisconsin Army National Guard.

“This is a great schoolhouse,” Morabito said. “It is represented well. People should be beating the doors down because they want to get in here.”

“I think that some of the best Soldiers in the state are a part of the RTI,” said Staff Sgt. Franklin Barlow, program manager for the JFO course. “They all want to be here and they all have a great work ethic.”

Barlow took a reduction in rank from Master Sergeant to Staff Sergeant because he knew his years of experience in the field would have a positive impact on the program.

“The reason why I took the bust is because I was really passionate about the JFO program, and I really wanted to see it go,” Barlow said.

Barlow has been with the program since its inception and is just one example of the commitment and professionalism the 426th brings to the table.

Staff Sgt. Susan Delaney, a native of Allouez, Wisconsin, is an instructor for the Unit Movement Officer course with the 426th. She appreciates the flexibility the unit gives her and explained that she is able to fulfill her drill obligations by selecting dates that are both convenient for her civilian life but also fulfill the unit’s needs at critical times.

“It’s nice to be able to pick my drill dates,” she said. “As long as there is a course running, I can be here to teach and help out. I like it. We have a really great group of instructors.”

RTI instructors must be among the most proficient in their jobs, and Delaney made clear that in order to be an instructor here, you have to put in the effort.

“As an instructor, you have to have gone through the course before you can instruct it,” she said. “If we put out a good product, if we train our students well, then they go back to their units and continue training others. I think it all starts with us.”

Warrant Officer 1 Matthew T. Hipp, a native of Greenville, Wisconsin, and recent graduate from the RTI’s warrant officer candidate school, is now an automotive maintenance warrant officer with the 1157th Transportation Company in Oshkosh. Hipp previously served as a maintenance supervisor with the 426th and was responsible for maintaining the equipment for the field artillery courses, and OCS and WOCS.

“We would work on the howitzers, the paladin, the trucks — everything they needed to be successful in their mission, we had to keep fully mission capable,” Hipp explained.

Hipp personified the exact type of success and impact the 426th hopes to have on the readiness of the force. He served as a member of the 426th, took his career to the next level by attending WOCS, and is now moving on to a new unit to share his experiences.

“You see how the RTI trains people and then they go out into actual units and they train others,” Hipp said. “That unit’s readiness is better because of the RTI. They’ll go out to a line unit, and they will use that experience to then teach younger Soldiers in their line units and they’ll be able to better communicate their message because of the experience they gained here.”

Hipp had some insight about the practicality of utilizing the 426th within the state as well.

“If you look at the majority of the officers and warrant officers in the state of Wisconsin, they were trained here at the 426th,” he said. “So we’re not only saving money but we’re increasing the readiness of Wisconsin with these programs.”

Hipp highlighted the extensive networking and collaboration between the 426th and other RTI’s around the country.

“It’s their ability to not only network, but it speaks to the quality of the people that are instructors here and that come through this RTI, because they really do set the standard for the rest of the country,” he said.
The 426th conducts courses at the Wisconsin Military Academy, an updated facility at Fort McCoy that has classrooms equipped with computers for smaller class settings, as well as Dailey Hall, which can facilitate larger groups of different size, with a maximum capacity of 500 when set up as an auditorium.