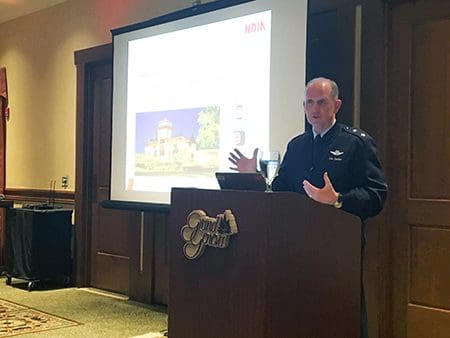 Dunbar spoke at the annual meeting of the Great Lakes Chapter of the National Defense Industrial Association (NDIA), an organization that fosters strategic dialogue on national security issues between the defense industry, government and academia.

Dunbar spoke on a variety of topics he said were vital to homeland security in 2018 and specifically focused on the cyber threats facing the nation from both foreign governments and rogue actors, but also the privacy Americans sacrifice in a world where so many devices are digitally connected. He also discussed the threats posed by drones, and the threats facing America’s power grid.

A catastrophic, long-term power grid failure, in particular, he said, could cause mass chaos and unrest across the country because of its potentially far-reaching impact on the daily services on which the nation relies. Such a scenario was the subject of a major exercise the Wisconsin National Guard and the Department of Military Affairs conducted in May, known as Dark Sky, and it is why the Department of Military Affairs and Wisconsin’s public utilities have partnered together in training and contingency planning.

He also discussed the legitimacy of U.S. elections in his address to the group.

“It is a fact that the Russian government meddled in the 2016 election,” Dunbar said, noting, that in his view, Russia’s goal is to undermine public confidence in America’s electoral process and the election’s outcome.

“They are engaging in psychological operations against our country,” he said. “They are trying to sow the seeds of discontent so that whoever wins, from the minute the election ends, a substantial portion of our country thinks that somehow, someway the election winner is not legitimate. And it undermines this republic that we all hold so dear.”

Dunbar concluded his remarks with a call to NDIA and its members to work collaboratively for our nation’s defense. He specifically noted that America’s National Defense Strategy, which shifts the primary focus from terrorism to strategic competition, will rely more heavily on the National Guard and federal Reserve.

“In order to defend the nation, the National Guard and the federal reserve will likely have to continue to do more,” he said. “This will likely mean more periodic deployments and more annual training for some personnel and some units. This cannot happen without the support of families and employers.”

Dunbar closed by referring to a recent speech by Defense Secretary James Mattis to the National Guard Association of the United States in which the secretary reminded the audience that America enjoys no God-given right to victory. Dunbar reminded the audience that the National Guard was a key component in the defense of the nation and it could not do its job without the support of employers and asked for their continued support.