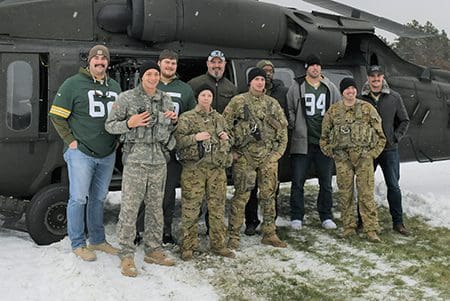 FORT McCOY, Wis. — Cadets at the Wisconsin National Guard’s Challenge Academy got some extra motivation the week of Dec. 3 as they prepared to graduate from the 22-week residential phase of the program.

Members of the Green Bay Packers spent Dec. 4 visiting the cadets to offer words of inspiration and perspective, and advisors from Western Technical College visited the program Dec. 6 to review cadet portfolios for the potential to receive college credits.

Nearly 90 cadets will graduate from the Challenge Academy program Dec. 15, which aims to reshape the lives of 16- to 18-year-olds at risk of not graduating from high school by using a structured quasi-military style and state-certified teachers to instill discipline, build cadets’ academic abilities, self-confidence and character.

Every cadet will now leave the program with college credits at Western Technical College. Staff from the college visited Fort McCoy last week to assess cadets on whether they meet course competencies for the college’s Professionalism and Success course, for which they will earn three credits. 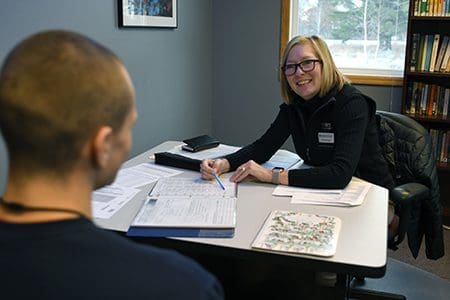 Tracy Noyes of Western Technical College in La Crosse, Wis., works with a Challenge Academy cadet to determine if he met the requirements for the college’s 3-credit Professionalism and Success course during a Dec. 6 visit to the Challenge Academy campus at Fort McCoy, Wis. Submitted photo

Western Technical College and the Challenge Academy earlier this year announced a new educational partnership that paved the way for cadets to earn college credit upon completing the program.

If the prospects of earning college credits wasn’t enough, the cadets also got to hear from a contingent of Green Bay Packers who flew in to Fort McCoy via a Wisconsin Army National Guard UH-60 Black Hawk helicopter for a visit.

“I thought it was a great day,” Packers defensive end Dean Lowry said. “Talking to kids about their daily structure. We saw where they eat, where they go to school, where they live. So a lot of similarities to our life and our structure and what we do. We work hard and everything like that, so just to see what they go through and relate certain situations we’ve had in life and to persevere and to really trust yourself I think was a really important part of the day.”

Lowry was joined by fellow Packers Lucas Patrick, Tyler Lancaster and Danny Vitale for the visit where they shared stories of perseverance and overcoming adversity.

Their stories resonated with many of the cadets.

“I love to hear everyone else’s experience,” said Cadet Lilit Ortega. “It makes us realize that what they’re saying is really meaningful and that we’re not alone and everyone else goes through the same things. That’s a role model. If they made it through, so can we. We have hope. It gives us hope.”

Cadets come to Fort McCoy for a full academic semester and then complete a one-year post-residential phase to help keep them on the right path after leaving the academy.

“But the key thing they really learn during those five months is self-discipline, self-motivation, non-cognitive skills,” said Pete Blum, the deputy director of the Challenge Academy.

Cadet Mekel Gordon said attending the Challenge Academy has helped him make positive changes he hopes to bring home with him.

“It gave me character,” he said. “It’s helped me in school, doing my schoolwork, and when I graduate, I’ll hopefully be a better person in the civilian world.”

The class that will graduate Dec. 15, is Wisconsin’s 41st class. More than 3,600 students have graduated the program in Wisconsin, with more than 81 percent also earning their high school equivalency diplomas while attending the Challenge Academy. The National Guard Youth Challenge Program currently operates 40 programs in 28 states, Puerto Rico, and the District of Columbia. Nationwide, more than 145,000 teens have graduated.