Year-in-Review: 2018 a year to remember for the Wisconsin National Guard 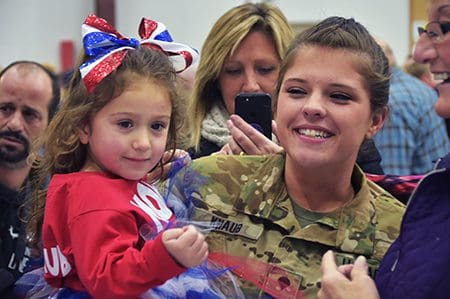 A Soldier from the Wisconsin Army National Guard’s 1st Battalion, 147th Aviation reunites with loved ones during a homecoming ceremony Jan. 25 at the Army Aviation Support Facility #2 in Madison, Wis. The unit completed a nine-month deployment to the Middle East as part of Operation Inherent Resolve, where it provided UH-60M Black Hawk helicopter airlift assets and maintenance support personnel. The unit flew 3,700 mission hours, conducted 69 medical evacuations, and transported more than 5,900 troops as well as approximately 200,000 pounds of cargo. Wisconsin Department of Military Affairs photo by Vaughn R. Larson

From happy homecomings to tearful goodbyes, honors, accolades and major training exercises, and from responses to extreme weather, new leaders, and honoring the past, 2018 marked a year to remember in the long and storied lineage of the Wisconsin National Guard.

Excitement and optimism generated by the late 2017 announcement that F35s could soon call Madison home carried over into the new year with welcome news, as 75 Wisconsin Army National Guard Soldiers from Madison’s 1st Battalion, 147th Aviation touched down safely on U.S. soil in January after a Middle East deployment. 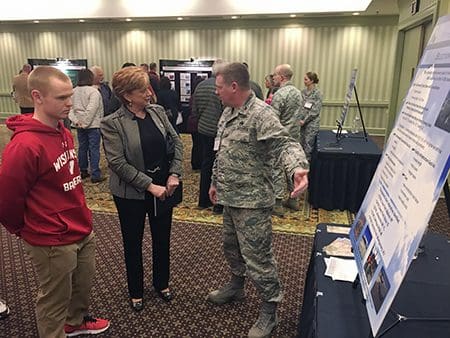 Col. Chris Green, the 115th Fighter Wing maintenance group commander, discusses the F-35 environmental impact statement process with a member of the community at a public scoping meeting March 8 at the Crowne Plaza Hotel in Madison, Wis. Interested community members, business leaders and public officials had an opportunity to register public comments and learn more about the F-35 and the environmental impact statement process. The meeting was the first step in the National Environmental Protection Act (NEPA)-mandated process to determine the environmental suitability of housing a squadron of F-35s at Truax Field in Madison. Wisconsin National Guard photo by Capt. Joe Trovato

In March, another group of aviators from Detachment 5, 641st Aviation departed the Badger State for Afghanistan en route to a deployment that concluded in the fall. Their deployment marked the first in a series of deployments for Wisconsin Army National Guard units in 2018. Later that month, a military engagement team from Milwaukee’s 157th Maneuver Enhancement Brigade departed for a Middle East deployment, and a team of Soldiers from the 112th Mobile Public Affairs Detachment left for its ongoing mission to U.S. Naval Station Guantanamo Bay in Cuba.

And while these units were busy with their federal missions overseas, other units across the state readied for a busy year of providing support to civil authorities here at home. As spring arrived across the state, a major exercise known as Dark Skies kicked off in May in the Fox Valley. More than 1,000 Soldiers, Airmen, first responders, volunteers, emergency managers, and others participated in the exercise, which simulated a long-term mass power outage and its second and third order effects. 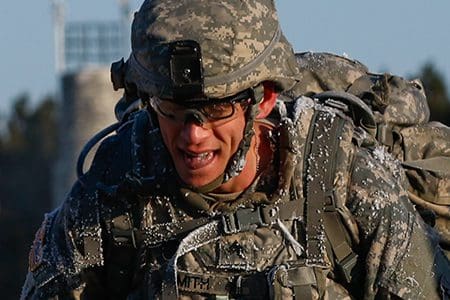 Training regularly with first responders and civil authorities helps prepare the National Guard for real-world emergencies and further develops relationships across all levels of state and local government. Those relationships were on display as summer gave way to fall, and the National Guard began a series of critical sandbagging efforts in Dane County and Sauk County in the aftermath of torrential rains that soaked southern Wisconsin in late August. The state called on the National Guard again over the Labor Day holiday weekend in Columbia County as floodwaters threatened to overtop the interstate on one of the busiest travel days of the year. Hundreds of Soldiers and Airmen from around the state assisted in the response over several weeks, during which they filled and emplaced hundreds of thousands of sandbags along interstates, private residences, businesses, and other critical infrastructure. 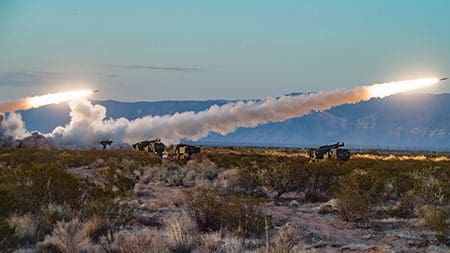 Just days later, another active hurricane season bore down on the southeastern United States, and more Wisconsin National Guardsmen were ready to answer the call. A dozen Soldiers and two UH-60 Black Hawk helicopters mobilized to assist civil authorities in North Carolina in the aftermath of Hurricane Florence, and more stood ready again a short time later as Hurricane Michael slammed into the United States. Meanwhile, a team of public affairs Soldiers and Airmen deployed to the Carolinas to assist in documenting the storm’s damage and the National Guard’s response. Local authorities relied on the same flight crews to rescue a pair of stranded kayakers from a marsh near Fond du Lac in September. 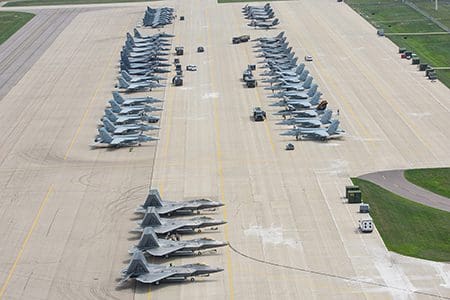 Fighters from across the Air Force, Marine Corps and Navy on the ramp at Volk Combat Readiness Training Center during Northern Lightning 2018 in August. Northern Lightning helps strengthen interoperability between services and gives the different branches a greater understanding of aviation capabilities within a joint fighting force. Photo courtesy of Joe Oliva

Dozens of Wisconsin Guard Soldiers also deployed to the nation’s southwest border over the summer in a variety of capacities to assist the Arizona National Guard as it supported the U.S. Customs and Border Patrol, and a team of National Guard cyber professionals mobilized in a standby status during the November elections to assist state elections officials in the event of a cyber incident.

And while the Guard was busy conducting its mission as the state’s first military responder during times of emergency, its federal mission as the nation’s primary combat reserve continued simultaneously. The Soldiers of Detachment 1, Company B, 248th Aviation out of West Bend returned to the waiting arms of families and loved ones at airports around the state in September after a yearlong deployment to the Middle East. Their brethren in the Wisconsin Air National Guard’s 128th Air Refueling Wing based at Mitchell International Airport in Milwaukee celebrated their own successful series of deployments in October with a welcome home from Lt. Gov. Rebecca Kleefisch and other state leaders. More than 260 Airmen returned from a series of global deployments in the preceding months. 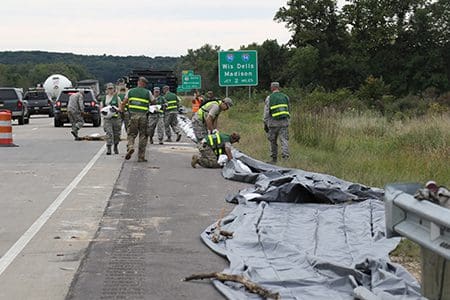 But as those Soldiers and Airmen enjoyed the sweet feeling of returning home, hundreds more prepared to head overseas. In the largest Wisconsin Army National Guard deployment since the entire 32nd “Red Arrow” Infantry Brigade Combat Team and more than 3,000 Soldiers deployed to Iraq in 2009-10, the 1st Battalion, 121st Field Artillery, a high-mobility artillery rocket system unit headquartered in Milwaukee with subordinate units in Sussex and Plymouth, deployed to locations across Southwest Asia with more than 360 Soldiers to provide fire support to coalition forces operating in the region.

Months later, in November, Red Arrow Soldiers from the 2nd Battalion, 127th Infantry packed the atrium at Lambeau Field in Green Bay for a memorable sendoff ready for an even larger deployment of nearly 400 Soldiers from the Appleton-based battalion and its subordinate companies in Green Bay, Marinette, Fond du Lac, Ripon, Clintonville and Waupun. The historic deployment marked the first-ever deployment for a Red Arrow unit to Afghanistan, opening a new chapter in the long and distinguished lineage of a unit that traces its origins all the way back to the Civil War and the famed Iron Brigade. 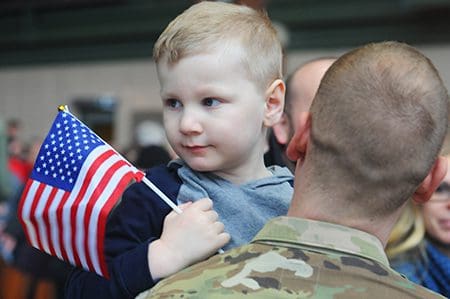 A Soldier bids farewell to family at a formal sendoff ceremony for the 2nd Battalion, 127th Infantry Regiment Thursday, Nov. 29 at the Lambeau Field Atrium in Green Bay, Wis. The battalion will head to Texas and Louisiana for additional training before deploying to Afghanistan to support the 2nd Security Force Assistance Brigade as part of Operation Resolute Support. Wisconsin National Guard photo by Staff Sgt. Matthew Ard

2018 marked a year of commemoration as well, as the Wisconsin National Guard celebrated the centennial of the Red Arrow’s formation and service in World War I. The Red Arrow, formed in July 1917, fought its way into history in 1918 as it smashed through every enemy line it encountered on the battlefields of France, earning its now synonymous “Red Arrow” nickname and cementing its place in Wisconsin military lore. The Red Arrow later went on to serve more days in combat – 654 – than any other American division during World War II, mobilized again in 1961 during the Berlin Crisis, and multiple times to Iraq in the years after 9/11, before the 127th began its second century of service and mobilized in 2018 for its first mission to Afghanistan. The 127th’s mobilization followed closely on the heels of a major training exercise for the entire 32nd Infantry Brigade Combat Team at Camp Grayling, Michigan in July that served as a validation of the Red Arrow’s readiness.

Meanwhile, 2018 also marked the 70th anniversary for the Wisconsin Air National Guard’s 115th Fighter Wing. The 115th’s history began in 1948 with the formation of the 176th Fighter Squadron at Truax Field in Madison. Today, the 115th Fighter Wing flies the venerable F-16 Fighting Falcon, but it began flying F-51 Mustangs and cycled through a number of different airframes including the A-10, the F-86 and the F-89. It now stands as a preferred candidate to receive the F-35A, pending the outcome of an environmental impact statement and final selection process, which began in 2018.

The 115th, along with the 128th Air Refueling Wing and flight crews from across the armed services descended on Volk Combat Readiness Training Center and the skies above central Wisconsin in May and again in August for the annual Northern Lightning exercise, which provided a world-class combat training environment.

While the Wisconsin National Guard was busy operationally over the past year, its Soldiers and Airmen garnered their fair share of accolades and honors as well. The Wisconsin Army National Guard’s Best Warrior, Spc. Austin Jahnke, from Company A, 1st Battalion, 128th Infantry advanced all the way to national competition after winning both the state and regional best warrior competitions. Jahnke and the state’s other best warriors, outstanding Airmen and Wisconsin Army National Guard Hall of Honor and Wisconsin Air National Guard Hall of Fame inductees were all honored at a joint ceremony in September celebrating their accomplishments and contributions to the organization.

Another Soldier, Spc. Jasmyne Harris, assigned to the 32nd Military Police Company, earned accolades and an award from the American Red Cross in 2018 for saving a choking toddler at an airport. Not to be outdone, in May, Sgt 1st Class William Kocken, from Company A, 2nd Battalion, 127th Infantry set the world record for the fastest marathon time carrying a 100-pound rucksack, as he marched to raise awareness for veterans issues and causes.

The seeds of new and diverse leadership also emerged in 2018. In June, Brig. Gen. Joane Mathews became the Wisconsin Army National Guard’s first female and first Native American deputy adjutant general for Army in Wisconsin National Guard history, and in July, 2nd Lt. Britney Fischer, became Wisconsin’s first female infantry officer, after the Army opened the branch to female Soldiers for the first time in its history. Mathews and Fischer were joined in September by another female leader and general officer, in Brig. Gen. Robyn Blader, who became the assistant adjutant general for readiness and training.

The past year was a momentous one, but the Wisconsin National Guard stands poised and ready for a dynamic 2019 of serving both the state – as the first military responder, and the nation as the primary combat reserve of the Army and Air Force.