Christmas from the trenches, then and now 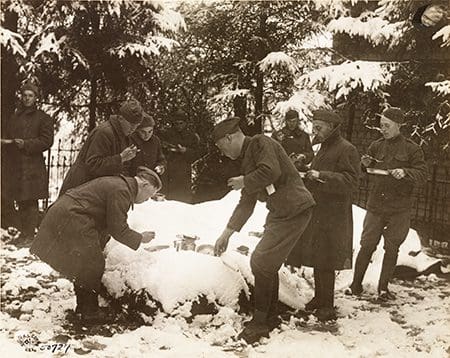 Soldiers from the 32nd “Red Arrow” Division enjoy their Christmas meal in Germany in December 1918, just six weeks after armistice that ended World War I. A century later, hundreds of Soldiers and Airmen from the Wisconsin National Guard, including the Red Arrow, are again deployed for the holidays. File Photo

As families gather ‘round the fireside to sing carols and share holiday cheer this year, hundreds of Soldiers and Airmen from the Wisconsin National Guard are spending their holidays standing watch around the globe, away from their own families, ensuring peace here at home.

This year, more than 800 Soldiers and Airmen are mobilized in places ranging from Afghanistan, Iraq and other locations across the Middle East, to Cuba and the nation’s southwest border, as they fulfill both their federal and state missions.

The same was true a century ago, as the 32nd “Red Arrow” Division of the Wisconsin and Michigan National Guard celebrated a peaceful Christmas in Europe – the guns of the Great War had fallen silent six weeks earlier. 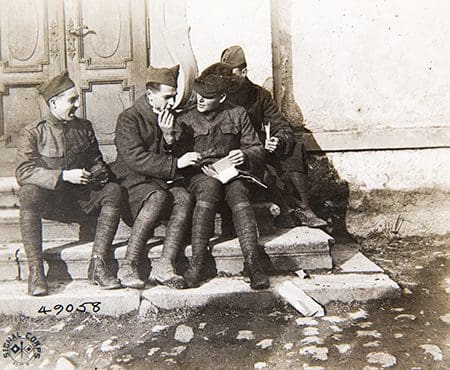 Soldiers from the 32nd “Red Arrow” Division open letters and packages from loved ones in Germany in December 1918, just six weeks after armistice that ended World War I. A century later, hundreds of Soldiers and Airmen from the Wisconsin National Guard, including the Red Arrow, are again deployed for the holidays. File Photo

Most of the division had just completed a 250-kilometer march to Coblenz, Germany, as part of the Allied Army of Occupation. Christmas cheer was courtesy of Red Cross packages from the U.S. filled with chocolate, candy and tobacco. It was the third Christmas away from home for those Guardsmen who has served near the Mexican Border in 1916.

“I regret I must be absent again this year at Christmas time,” wrote Sgt. Henry Drummond in a letter home.

“We had a real Christmas anyhow,” wrote the 120th Field Artillery’s Earl Barnum in a letter home. “It snowed all Christmas Eve which made it seem more real.”

It took more than a month for Barnum’s parents to read about their son’s Christmas.

“Tonight we are sitting by the fire smoking our Christmas cigars and talking about what we will do when we get home.”

One hundred years later, Soldiers from both the Red Arrow and the 121st Field Artillery, along with other Wisconsin National Guard units once again find themselves mobilized in the service of their nation, likely having many of the same thoughts.

Today’s Soldiers and Airmen have the luxury of video calls and instantaneous communication even from half a world away, but even the connections of modern technology cannot replace the warmth of family during the holidays. 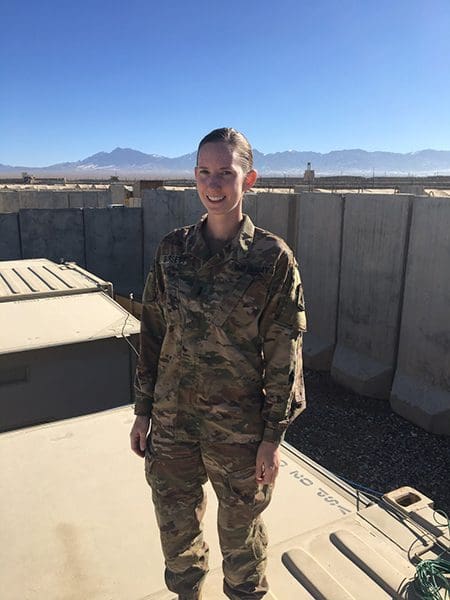 First Lt. Alicia Dorsett in Afghanistan. Dorsett and the rest of the Milwaukee-based 1st Battalion, 121st Field Artillery mobilized for deployment to locations across Southwest Asia in July. Submitted photo

“Around the holidays, it is a lot harder being away from home and the people that you love,” said 1st Lt. Alicia Dorsett, a platoon leader with B Battery, 1st Battalion, 121st Field Artillery. “But being with your Soldiers and going through it all together makes it much easier.”

Dorsett, a Poy Sippi native, is currently serving in Afghanistan, her second stop on this deployment, which for her began in the United Arab Emirates. She said she will spend Christmas enjoying a meal and serving her fellow Soldiers before listening to Christmas music, watching a Christmas movie and calling home.

Others said they would spend the day in similar ways. 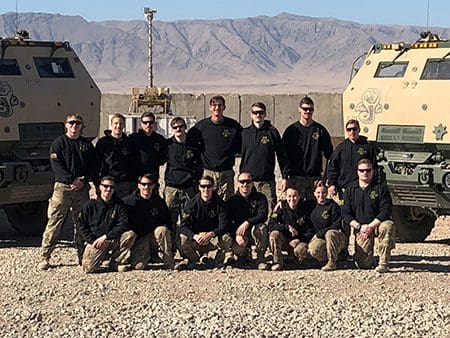 “What I’m planning is calling home to my wife Amy and our one-year-old daughter Brinley, or facetiming with them,” said Sgt. 1st Class Zachary Fischer, a platoon sergeant in B Battery, from Sparta. “I’ll also try and call my parents and sister as well to talk to them on Christmas. Otherwise our platoon will be spending most of our time together, like normal, as we are always on call and ready to do our job.”

The Milwaukee-based 121st’s job is a critical one. The battalion is spread across five countries and a dozen locations conducing combat fire missions and theater partnership missions simultaneously, according to Maj. Dan Hendershot, the battalion’s executive officer.

Hendershot said he doesn’t dwell on missing the holidays with his wife and two sons, and thanks to technology, he speaks to them almost daily. He plans to call them during the traditional Hendershot Christmas morning breakfast.

The support from back home has been incredible, he said.

“I’m not joking when I say we could fill an entire five-ton truck bed with boxes from families, friends and Wisconsin-based organizations,” he said.

Dorsett, whose mother baked enough cutout Christmas cookies to give to every Soldier on her forward operating base, echoed that sentiment.

“We greatly appreciate the support we’ve received from Wisconsin,” she said. “Often we get care packages from random strangers, and it’s very humbling.”

First Lt. Shane Cullen said he gets a chance to talk to his wife and parents most days.

“They stay up during odd hours just to be able to send a couple texts or make a phone call,” he said. “Care packages have been awesome, and they always send more than I need, so I am able to share with my platoon.”

Sgt. Eleanor Knipfer, a gunner in B Battery said she will spend Christmas watching the Grinch with fellow Soldiers and drinking hot chocolate before opening the many gifts and care packages sent from loved ones and grateful citizens.

“Our group will open the stockings together that were generously sent to us,” she said. “I am also sending my loved ones gifts and cards to let them know I am thinking of them.”

Knipfer said she is grateful for the Soldiers with whom she serves, especially during the holidays, because they have become like family.

“With only 15 of us, we spend a lot of time together and have gotten to know each other very well,” she said. “We are fortunate to have some very comical Soldiers among us who never fail to have the entire room laughing. We celebrate our accomplishments, and reflect upon our failures.”

“As much as I wish I could enjoy my loved ones’ company during the holidays, it is important for them to know that I feel their love and support from miles away and that I am lucky enough to have the family that I do here to celebrate with,” she added.

Others like Spc. Antony Clements, of Manitowoc, felt the same, noting that serving in the unit “is like being surrounded by a caring family.” 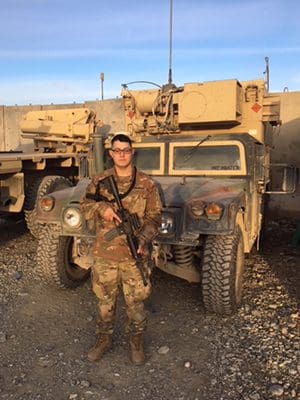 Spc. Antony Clements in Afghanistan. Clements and the rest of the Milwaukee-based 1st Battalion, 121st Field Artillery mobilized for deployment to locations across Southwest Asia in July. Submitted photo

Spc. Conrad Kreunen, of Milwaukee, said he and his comrades have decorated their living areas with festive ornaments and Christmas trees to make it feel more like home.

“It is difficult being away from home during a time where I’m used to being with my family, but we all get by together,” he said. “We all know that it won’t be too long before we return home and will have the opportunity to make up for lost time.”

For Fischer, whose platoon transitioned from a training mission with an allied force to a combat fire support mission for U.S. and allied forces in Afghanistan, video calls, photos, and regular communication have helped ease the pain of leaving a wife and baby behind in Wisconsin.

“Being a new parent, however, has been the hardest part of this deployment for me, having to leave my wife and, at the time, nine-month old daughter for almost a year to travel halfway around the world” Fischer said. “The risks of the combat zone we’re in now aren’t what’s hard for me to deal with. It’s missing all those little moments where my daughter started to walk around the house, started saying so many words, and just seeing her excited to learn about the world she’s living in.”

He had a final word for those back home.

“On those days with your families and friends, please take a moment and say a prayer for all the military men and women, first responders, dispatchers, hospital personnel, and their families who are not able to spend the holidays with their loved ones.”

The more than 350 Soldiers of the 121st are not the only Wisconsin Guard unit currently deployed. Approximately 30 Soldiers from the Milwaukee-based 157th Military Engagement Team are spread across multiple locations in the Middle East conducting engagements with partner nations.

Staff Sgt. Christopher Reitz, a future operations noncommissioned officer from Fond du Lac, said he will spend Christmas in Saudi Arabia conducting an engagement. His family back home sent everyone on his team a stocking with assorted gifts, and like his fellow Soldiers in the 121st, he said the Soldiers he’s deployed with have become part of his extended family. And while his work will continue through the holidays, he knows it makes a difference.

“I feel the mission is going well, and we are creating a positive impact with every nation we have engaged with,” he said.

Approximately 400 Red Arrow Soldiers from the 2nd Battalion, 127th Infantry mobilized in late November for their upcoming mission to Afghanistan. They are currently training in Texas, and many will have the opportunity to spend the holidays with their families, and a team of Soldiers from the 112th Mobile Public Affairs Detachment remains deployed to U.S. Naval Station Guantanamo Bay, Cuba.

Sgt. Kristy Thor, a mobility noncommissioned officer from Oshkosh serving with the 121st had this to say to loved ones back home.

“Merry Christmas and happy holidays. I hope you all are doing great, don’t miss me so much and eat extra food for me. I miss you all and cannot wait to see you all again.”

Thor said she’s spending Christmas with her comrades, “but to me, the special gift is one I received from my daughter. It was a letter and a handmade gift.”