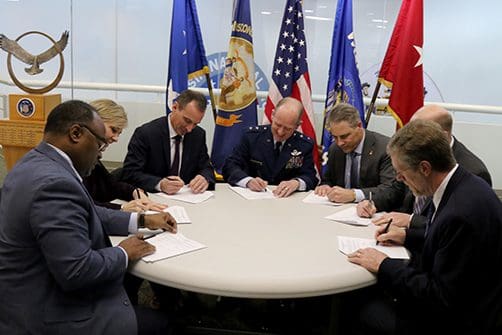 WASHINGTON, D.C. — The Department of the Army recognized Wisconsin’s National Guard and Department of Military Affairs for successfully building a partnership and collaborating with private electric utilities to mitigate risk to the power grid and identify opportunities to improve incident recovery.

The Wisconsin National Guard and Department of Military Affairs received the 2018 Army Community Partnership Award at a recognition ceremony Dec. 4 in the Hall of Heroes at the Pentagon, in Washington, D.C. Wisconsin was one of seven awardees, comprised of five installations and two National Guard commands.

Wisconsin’s National Guard and Department of Military Affairs have placed considerable emphasis on the importance of developing a dynamic and enduring partnership with private utilities companies throughout the state, said Lt. Col. G. David Brown, the Wisconsin National Guard’s deputy director of plans, training and exercise, and a key player in building the partnership. 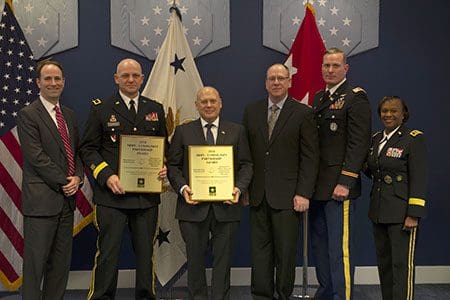 Members of the Wisconsin Army National Guard pose with their industry partners and Jordan Gillis (left), acting assistant secretary of the Army for Installations, Energy and the Environment, at the 2018 Army Community Partnership Awards ceremony Dec. 4, 2018 in the Pentagon Hall of Heroes. (Photo Credit: Devon Suits)

“Receipt of the Army Community Program Award not only further affirms the efforts of many with the public private partnership, but better socializes the critical importance of establishing professional relationships outside of the military construct in an effort to ensure the Wisconsin National Guard remains ready to support the needs and expectations of the citizens of Wisconsin,” Brown said.

The Wisconsin Department of Military Affairs and Wisconsin utility companies formally established their partnership in March 2015, and in 2017, the Wisconsin Utilities Coordination Group was established to support joint planning and formalize a system to coordinate activities during an emergency.

“Congratulations to the Wisconsin National Guard on this well-deserved recognition,” said Lacey Hogan of Alliant Energy and chair of the Wisconsin Utilities Coordination Group. “They have been a driving force in the effort to strengthen public-private partnership in Wisconsin, which is essential when it comes to emergency preparedness and recovery involving our critical infrastructure.”

The charter outlines a set of non-binding agreements and an enduring partnership to encourage collaboration among the partner organizations, serves as a mechanism to develop long-term solutions to achieve a common operating picture, establishes the means to identify, plan and execute collaborative grid response and resiliency exercises and ultimately ensure the security of the state’s critical electrical infrastructure.

The partnership has been tested and built upon over the years through various joint exercises throughout the state such as the annual Statewide Interoperable Mobile Communications – or SIMCOM – exercise, and most recently, Dark Sky. Part of the Dark Sky simulation involved different cyber threats facing the electric grid and tested the response to those scenarios.

At the annual Governor’s Cybersecurity Summit in September, officials from Wisconsin Emergency Management (WEM), the state Division of Enterprise Technology, the Wisconsin Department of Transportation, and Madison Gas & Electric discussed lessons learned during Dark Sky, such as the importance of collaborating during response efforts.

“It plays a huge role, because you can do internal training, but it’s that working together, it’s understanding what a utility’s needs are, so that we can make sure that we are responding in support of them,” said Greg Engle, Wisconsin Emergency Management’s director of planning and preparedness.