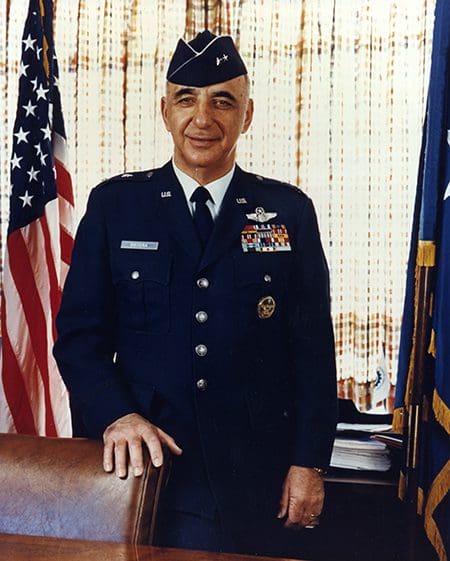 Matera’s military career began as a U.S. Marine in 1943, serving in the South Pacific as an aerial gunner and infantry until his release in October 1945. He enlisted as an aviation cadet in the U.S. Air Force in October 1948. His early assignments as a pilot included the 7th Fighter Squadron in Tageau, Korea in January 1951, and a ground forward air controller for the U.S. Army’s 5th Regimental Combat Team from June through August 1951.

In March 1952 Matera was assigned as a flight commander with the 433rd Fighter Interceptor Squadron and Headquarters, 520th Air Defense Group at Truax Field in Madison, Wisconsin. At that time, Truax Field was an active duty Air Force base. After his release from active duty, Matera joined the Wisconsin Air National Guard’s 176th Fighter Interceptor Squadron in August 1954. He was appointed chief of staff for the Wisconsin Air National Guard in November 1971, promoted to brigadier general in 1973 and major general in 1976. 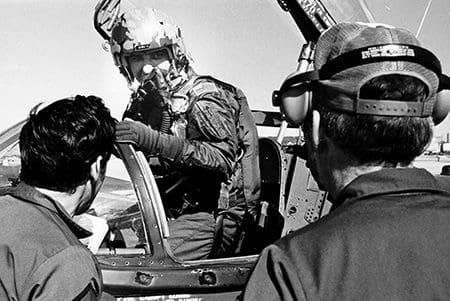 “Retention has to be good,” Matera told the Wisconsin State Journal shortly after he was named adjutant general in 1979. “It doesn’t make any difference how many recruits you have if they don’t stay.”

Matera also led the effort to build or renovate armories across the state. He enlisted the aid of mayors and congressmen to raise awareness of the Wisconsin Army National Guard’s need to beef up its rosters, facilities and equipment, and to win time to increase unit strength. 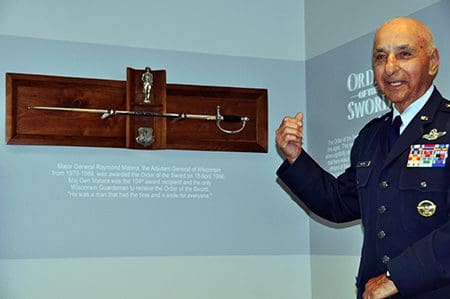 Retired Maj. Gen. Ray Matera, Wisconsin’s adjutant general from 1979 to 1989, was on hand to see his Order of the Sword on display at Joint Force Headquarters in Madison, Wis., Aug. 23, 2013. Matera was the fourth Air National Guard recipient of the Order of the Sword, and is believed to be the first adjutant general to be selected by his noncommissioned officers for the honor. Wisconsin Department of Military Affairs photo by Vaughn R. Larson

“I would like to see us be the top state in the country, with the best units,” Matera said in the Spring 1980 issue of At Ease, the Wisconsin National Guard’s official publication. “The best Guard in the country.”

During Matera’s tenure as adjutant general, the Wisconsin Army National Guard’s 32nd Infantry Brigade deployed to Germany in 1986 in support of REFORGER — or Return of Forces to Germany, a massive Cold War exercise to test mobilization and multi-national cooperation capabilities.

“There was no loss of life, no serious injury,” Matera said in a 1989 Wisconsin State Journal interview. “The Army couldn’t believe we didn’t leave a weapon or lose equipment. We set records in loading and unloading equipment in REFORGER. Every piece of equipment started when we loaded it on a ship in Baltimore, and when we unloaded it in Brussels. We were pretty proud of that.”

“Maj. Gen. Matera led the Wisconsin National Guard at a time of transition [1979-1989] — his tenure as the adjutant general connected the post-Vietnam era with the total force of Desert Storm,” Dunbar said. “He made a substantial contribution which is still being felt.”

“Gen. Matera did great things for the Wisconsin Army National Guard,” the Hall of Honor plaque reads. “He directed construction of 18 new armories and renovation of other facilities, he brought new force structure to Wisconsin, [and] he established the state’s Officer Leadership Board … [he] is widely known as the ‘world’s greatest fighter pilot.’”

In 1986 Matera became only the fourth Air National Guard recipient — and perhaps the only adjutant general — of the Order of the Sword, a U.S. Air Force program which allows noncommissioned officers to recognize command officers they hold in high esteem. That award is currently on display at Joint Force Headquarters in Madison, Wisconsin.

“He was a man that had the time and a smile for everyone,” the inscription below the sword reads.

Matera also served as vice president of the National Guard Association of the United States in 1982, and president in 1984.

In his later years, Matera was active in the Honor Flight program operating out of the Dane County Regional Airport, greeting veterans in his military uniform.

“It’s always been important, right from the start,” Matera said in 2013 of the Honor Flight program. “I spent some time [as a Marine] in the South Pacific and I see a few of the people I know there [at the Honor Flights]. I’ll have a nice chat with them. You never want to just walk away from them.”

A graveside service with full military honors will be held at 1 p.m. May 24, 2019 at Resurrection Catholic Cemetery in Madison.