Wisconsin Guard seeks to strengthen family relationships for its members 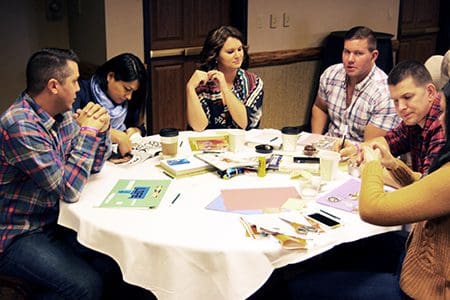 When the Wisconsin National Guard was preparing to join the war effort more than 100 years ago, the War Department discharged married Soldiers.

Fast-forward to today, and the Wisconsin National Guard is providing relationship-strengthening retreats — not only for married couples, but individuals and families as well.

“We want ready families,” said Lt. Col. Douglas Hedman, the Wisconsin Army National Guard’s state support chaplain and administrator for the Strong Bonds Program. “The bottom line is, being in the military is hard on the service member and their family, and we need to do whatever we can to shore them up.”

Strong Bonds, a relationship education and skills training initiative, is a unit-based, chaplain-led program that helps unit commanders build individual resiliency by strengthening the Army and Air Force family. The events are typically held from Friday night to midday Sunday at a resort setting, at no cost to the service member or family.

“It’s a time for them to kick back, relax and be focused on their relationship,” Hedman said. “It’s to make them stronger.”

“It ultimately saves the government money,” Friese said. “You’ve invested a lot in people to get where they are, to retain them, to get them to maximize the experience and knowledge and skillsets that they have. Ultimately, all those lead to mission success.”

Hedman cautioned that the Strong Bonds programs for couples is not crisis counseling for marriages, but rather a workshop to learn better communication methods.

“It’s maintenance,” Hedman explained, “but some couples have said it saved their relationship.”

The lessons taught in one Strong Bonds curriculum — Speed of Trust for Strong Relationships and Marriages, based on Stephen M.R. Covey’s bestselling book Speed of Trust — are used to help individuals learn more about themselves and others to make better relationship decisions. Friese also applies these lessons with Air National Guard leaders.

“It allows them to gain continuity and camaraderie together,” Friese explained, “to learn about each other, maximize performance and look for retainability.”

Hedman said that everyone who attends a Strong Bonds event grows from the experience.

“It’s not a pressure thing to divulge what you don’t want to divulge,” Hedman said. “You go at your own pace, and it’s been very successful.

“I guarantee that they’ll have a wonderful weekend,” Hedman continued. “They’ll come away energized, relaxed and ready to face what the future throws at them.”