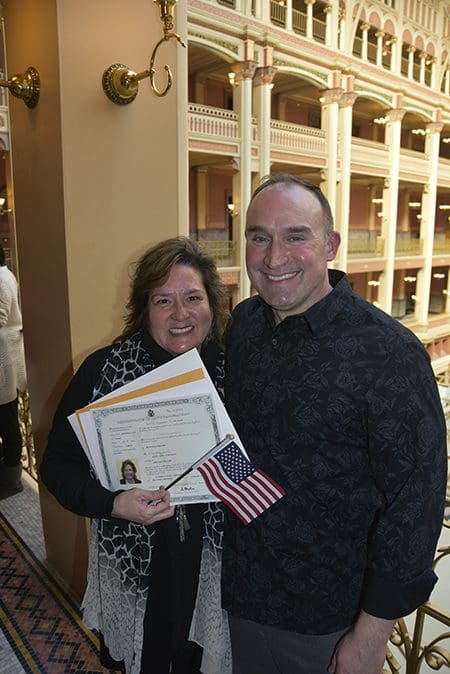 Recent political discord and turmoil between the U.S. and Nicaragua has limited the interaction over the past few years, but the Guard’s program remains vibrant, and now Schultheiss brings a fresh and unique perspective to Wisconsin’s program. He might be just the right person for the job, thanks to his 19-year marriage to Gloria, a Costa Rican immigrant and a newly minted U.S. Citizen.

Gloria, who was seven when she immigrated to the United States in 1978, took the oath of citizenship during a Feb. 21 ceremony at the federal courthouse in downtown Milwaukee.

“I have always embraced Gloria’s Costa Rican culture, not only because it is important to her and her family, but because the close family ties that she shares with her family are the same ones that I grew up with in Wisconsin,” Schultheiss, who simultaneously serves as the commander of the 132nd Brigade Support Battalion, said. “These shared values have kept us together since 1995 and continue to help us grow as friends and partners. I’ve always been interested in international affairs, having earned a B.A. in International Studies from UW-Whitewater. But my years living with Gloria, whom I met in college, and our multiple trips to Central America, have given me a greater appreciation of her culture and the wonderful people who live in that part of the world. So when the state partnership program director position became available, and knowing that we’re partnered with Costa Rica’s neighbor Nicaragua, it seemed like a natural fit for me.”

That perspective, coupled with Gloria recently becoming a U.S. citizen, has given the Schultheiss family a new appreciation for what it means to be an American.

“I love this country,” Gloria said, noting she saw it as a privilege to become an American. “I am more than pleased with the way the country has treated us for more than 40 years. I felt it was time for me to make the transition. In reality, the United States is the country where I grew up and I owe this country for what I am today. For me taking the oath is a way to say ‘thank you’ to the U.S.A.

“It’s a way to say thanks to the country for all the things we receive, and sometimes the things we take for granted like security, a peaceful environment, a great health system, excellent schools and excellent means of communications,” she added. “Most of all freedom. Access to all of these is so comforting. As I stated earlier, to me it’s a privilege and not a right.”

Gloria’s father worked in Costa Rica for the Ministry of Education visiting schools and sourcing needs for technical programs like machine shop or welding. One day, he met a man from a Wisconsin company that specialized in selling equipment for technical schools in countries like Costa Rica. That man eventually offered him a job, and the family soon moved to Fontana, Wisconsin. Gloria, her two brothers, mother and father left behind a close-knit family in Costa Rica for an unknown future in the United States.

“When we first arrived it was very exciting and very scary,” she said. “I recall that I was also sad that we were so far away from our other family. I didn’t know the language and I knew that shortly I would be going to school. We arrived on a Friday and started attending school the following Monday. Due to the language barrier, I had to repeat 2nd grade. The school was very accommodating with my brother and I.”

She later met her husband Derrek at UW-Whitewater, and the two have been happily married throughout the challenges posed by military life — including a deployment to Iraq with the Wisconsin National Guard’s 732nd Combat Support Sustainment Battalion in 2008.

Derrek believes that their shared experience will only make him a better director of the Wisconsin Guard’s state partnership program.

He said his goal is to pursue additional partnerships with other nations and actively work to enhance the highly successful engagement program.

“By partnering with other Wisconsin agencies and organizations, both public and private, we solidify our public image as a community convener and strengthen relationships necessary for our own internal disaster response efforts,” he said. “We recognize that a successful State Partnership Program integrates civil partners into our military-to-military engagements.”

Ultimately, he said, the program enhances the Wisconsin National Guard’s readiness for both its state mission as the first military responder during emergencies, and as the primary combat reserve of the Army and Air Force.

“By providing opportunities for our personnel to assist global partners, we improve our ability to recruit and retain talent,” he said. “The state partnership program allows Wisconsin National Guard personnel to put training into practice, to incorporate best practices and lessons learned, and for our formations to benefit from cultural exchange and joint experience.”

Safe to say that Schultheiss knows the value of shared cultural understanding and the common values that exist across cultures.