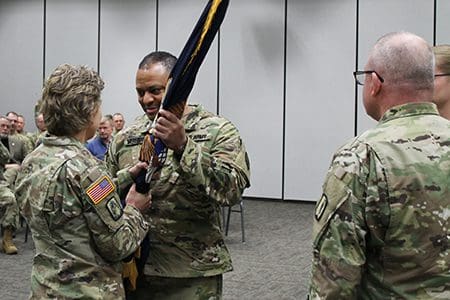 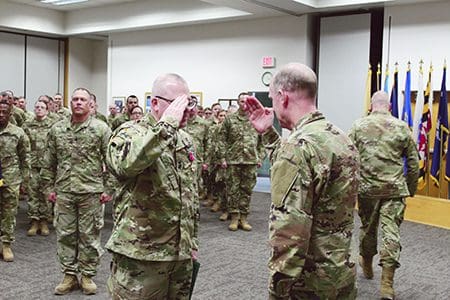 He also helped usher in new course offerings in the form of a unit movement officer course (UMO) and the joint fires observers course (JFO) – all of which position the 426th as one of the premier RTIs across the reserve component. The training, qualifications and lessons taught at the RTI have a direct impact on the Wisconsin National Guard’s ability to fulfill its state and federal missions, and it simultaneously develops the readiness of Soldiers from other states and active duty personnel to complete their respective missions as well.

“Commanding the 426th RTI was a very rewarding experience,” Brown said. “The Regiment accomplished a lot in the last two years. We added a number of courses to include the Joint Fires Observation Course, and the Unit Movement Officer Course. These two courses alone accounted for an increase of almost 600 students last year. The Regiment also passed its TRADOC (Training and Doctrine Command) accreditation with a rating of 95.4% far exceeding the 80% pass rate required. I am very proud of the team here at the RTI and it truly was a privilege to serve as the commander of this outstanding institution.”

Brown passed the regimental colors to Meredith – himself a Wisconsin Military Academy OCS graduate who commissioned as a field artillery officer. Meredith was quick to credit Brown for his leadership during his command tenure.

“Col. Brown, what an amazing job you have done leading and serving the 426th with honorable service,” he said during the ceremony. “You have stewarded this organization’s legacy of professionalism and educational excellence exceptionally well. Under your leadership, the RTI successfully passed its accreditation, stood up the UMO course, executed the JFO course, and expanded the number and array of courses offered to both National Guard and active duty Soldiers.”

“Under your leadership, the 426th fulfilled its mission to increase the volume and diversity of training, expand its capacity, and set the conditions for future innovations,” Meredith added. “You have done a phenomenal job leading this organizational in yielding its influence locally, regionally, and nationally.”

In his remarks at the change-of-command ceremony, Meredith praised the Soldiers of the 426th for their leadership and professionalism while noting the culture of excellence for which the RTI is known across the nation.

“I am honored and privileged to join the team, and together in a spirit of excellence, fulfill our critical role and responsibility to train, develop, and certify our Army’s professionals, helping each of them reach their full potential as trained, ready, and resilient leaders.”