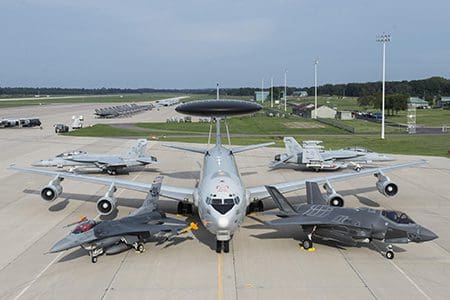 Northern Lightning is a tactical level, joint training exercise replicating today’s air battle space with current and future weapons platforms. A variety of aircraft including the F-16, EA-18, A-10, and KC-135 will participate in the exercise.

Volk Field CRTC is one of the premier training installations and airspaces in the country, thanks to its expansive airspace and the quality of the training the installation can simulate.

Northern Lightning is one of seven Air National Guard joint accredited exercises held at a Combat Readiness Training Center. Col David May, the commander of Volk Field CRTC, said Northern Lightning continues to grow each year because of the high quality of the exercise as well as the first-class training area and facilities Volk Field offers.

“We are thrilled to host the first of our two Northern Lightning exercises this year,” May said. “Putting on an exercise of this magnitude takes an incredible amount of planning, hard work and dedication on the part of our Airmen, and their efforts over the past months make this a realistic and rewarding training experience for all participants both in the National Guard and the active component. Our airspace, facilities, and ranges are second to none, and Volk Field is one of the premier counterland training locations in the nation. Pilots will get to operate in a contested environment with adversary aircraft, electronic jamming and simulated ground-based threats.”