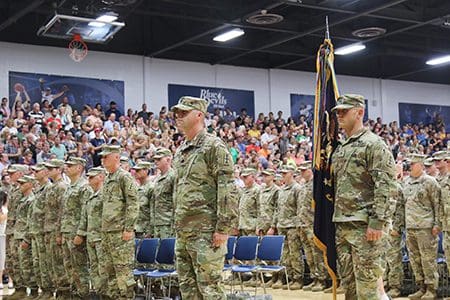 Lt. Col. Aaron Freund, the commander of the 1st Battalion, 128th Infantry, stands before his troops during a sendoff ceremony at Johnson Fieldhouse on the University of Wisconsin-Stout campus in Menomonie, Wis., July 14. Gov. Tony Evers and senior Wisconsin National Guard leaders joined family and friends at the sendoff ceremony for the unit. Approximately 400 Soldiers will deploy as a security element for coalition forces in the Central Command theater of operations. Wisconsin National Guard photo by Staff Sgt. Katie Eggers

The 1st Battalion, 128th Infantry, part of the famed 32nd “Red Arrow” Infantry Brigade Combat Team, mobilized for its upcoming mission in Afghanistan, where it will serve as a security element for coalition forces operating in the country.

“We did a lot of training at Fort McCoy because this is a different kind of deployment than I’ve been on before,” said Staff Sgt. Joseph Sweeney, a team leader with Company C. “In the past we were kind of in combat operations going out looking for the enemy, whereas in this deployment we’ll be protecting advisors, so basically acting as body guards. So it’s a bit different.” 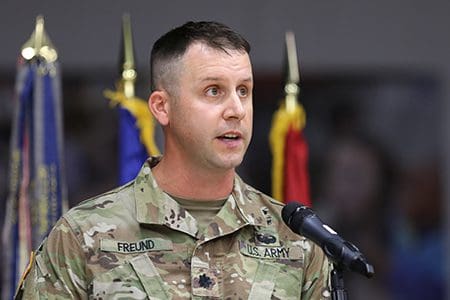 Lt. Col. Aaron Freund, the commander of the 1st Battalion, 128th Infantry, speaks during a sendoff ceremony at Johnson Fieldhouse on the University of Wisconsin-Stout campus in Menomonie, Wis., July 14. Gov. Tony Evers and senior Wisconsin National Guard leaders joined family and friends at the sendoff ceremony for the unit. Approximately 400 Soldiers will deploy as a security element for coalition forces in the Central Command theater of operations. Wisconsin National Guard photo by Staff Sgt. Katie Eggers

This mobilization will be the fourth of Sweeney’s career, and he noted the importance of mentoring the younger Soldiers in the unit. Roughly 30 percent of the unit has prior deployment experience.

“Just try to provide information, just try to develop them as Soldiers, give them information that I wish I would’ve had prior to my first deployment,” he said. “Just do the best I can to ensure that any questions they have are answered.”

Cpl. Paris Bassett, a combat medic assigned to Company B, is one of those Soldiers embarking on her first deployment, but said she feels that both she and the unit are well-prepared.

“They came through one of my training lanes over [annual training] so I trained them on some medical skills,” she said. “I’m really looking forward to working with them. They’re a really good unit.”

Likewise, 1st Lt. Jonathan Secraw, a platoon leader and liaison officer from the battalion headquarters, said the unit was “ready to go” and looking forward to working with the Security Force Assistance Brigade, or SFAB, that they will support overseas. 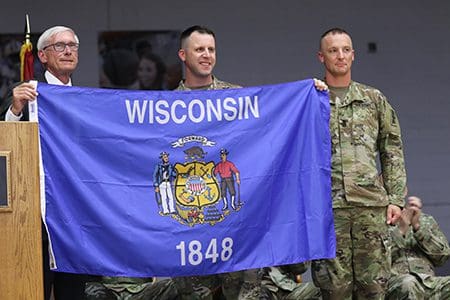 Gov. Tony Evers presents Lt. Col. Aaron Freund, the commander of the 1st Battalion, 128th Infantry, and Command Sgt. Maj. Eric David with a Wisconsin flag during a sendoff ceremony at Johnson Fieldhouse on the University of Wisconsin-Stout campus in Menomonie, Wis., July 14. Gov. Evers and senior Wisconsin National Guard leaders joined family and friends at the sendoff ceremony for the unit. Approximately 400 Soldiers will deploy as a security element for coalition forces in the Central Command theater of operations. Wisconsin National Guard photo by Staff Sgt. Katie Eggers

“I’ve been living down in Texas the last four months as the LNO (liaison officer), kind of working with the SFAB and 128th, and I’m just ready to see those two organizations come together and start working together,” he said at the ceremony.

The unit will conduct additional training at Fort Bliss, Texas alongside the unit it will support before deploying overseas.

The 128th’s battalion commander, Lt. Col. Aaron Freund, invoked history as he addressed his assembled troops, their families, and community leaders on hand at the sendoff ceremony, noting the unit’s deep roots in Wisconsin military lore.

“The Soldiers of the 1st Battalion, 128th Infantry come from a long line of professionals committed to the profession of arms,” Freund said. “We trace our history to the spring of 1861 when the 2nd Wisconsin Volunteer Infantry Regiment joined by several other regiments to form the famous Iron Brigade, one of the most feared and respected units on either side in the Civil War.”

The Iron Brigade went on to great fame in the Civil War, earning battle streamers at places like Fredericksburg, Cold Harbor, Spotsylvania and elsewhere, including heroics in a cornfield at the Battle of Antietam and in a valiant stand against Confederate forces on the first day of the Battle of Gettysburg that changed the course of the battle in the Union’s favor.

The 128th includes companies spread across west central Wisconsin, including Company A in Menomonie, Company B in New Richmond with a detachment in Rice Lake, Company C in Arcadia with a detachment in Onalaska, and Company D in River Falls. The battalion’s headquarters is split between Eau Claire and Abbotsford, and Freund noted that Eau Claire was home to Company C of the 8th Wisconsin Volunteer Infantry during the Civil War — the caretakers of Old Abe, a bald eagle mascot that accompanied the unit into battle. Old Abe was known throughout the Union and Confederate armies, and returned to Wisconsin alive after the war and lived at the state capitol until a fire at the capitol claimed his life in 1881. His image remains the symbol of the Army’s 101st Airborne Division, the “Screaming Eagles” as well as the namesake for the 128th as the “Eagle Battalion.”

As the Army reorganized before World War I, the 1st and 2nd Wisconsin Volunteer Infantry Regiments became the 127th and 128th Infantry Regiments of the Wisconsin National Guard’s 32nd Division, which went on to fight in four major campaigns in France and earned a reputation for its ferocity in combat. They ultimately pierced every enemy line they encountered during the war, including the vaunted Hindenburg Line, for which it earned its moniker — the “Red Arrow” Division, symbolizing a red arrow breaking through an enemy line on a map.

World War II brought still more accolades for the 128th and the Red Arrow, as it fought its way through New Guinea and the Philippines – logging 654 days in combat — more than any other American division in the war.

The Red Arrow’s legacy continued to grow in the years since Sept. 11, 2001, when thousands of troops and nearly every unit in the Wisconsin Army and Air National Guard deployed to combat theaters in Iraq and Afghanistan. Elements of the Red Arrow deployed multiple times to Iraq including the 128th’s deployment from 2004-06, and again when the entirety of the 32nd Infantry Brigade deployed to Iraq in 2009-10. In late 2018, the 128th’s sister battalion, the 2nd Battalion, 127th Infantry became the first unit in the Red Arrow’s storied history to mobilize for deployment to Afghanistan. Now the 128th will follow them there.

“And as the War on Terrorism ignited, we were also there and ready, and when called upon for civil assistance, for not only the great State of Wisconsin, but for the citizen of Florida during Hurricane Irma in 2018, we were also there and ready,” Freund said, noting the Guard’s dual-mission as the first military responder during times of emergency at home. “You see, we are always ready, and we are always there.”

He closed by thanking the families of the deploying troops, acknowledging the difficult task of sending a loved one into harm’s way to serve their country.

“It’s a saying in the Army that Soldiers write the checks, but families pay the bills, and in a time of conflict when we continue to prepare and train for the call such as this, that statement is never more true,” he said. “So to all that wear no uniform but give so much, sacrifice so willingly and serve as such an example to our nation and each other, my genuine thanks and appreciation will never be enough, for a Soldier does not fight because they hate what is in front of them. They fight because they love what they left behind.”

U.S. rep. Ron Kind, who represents Wisconsin’s 3rd Congressional District, thanked the Soldiers and their families for their service as he wished them well on their deployment.

“We’ve all gathered here to send you off with our hopes and prayers for a successful mission and a safe return home,” he said.

He later added, “You’re well-trained. You’re well-motivated. You’re well-led. You are, in short, the best our state and our country has to offer. And I am also very gratified to get reports from our military field command who couldn’t be happier with the performance of the Wisconsin National Guard and our reserve units, because they know when they get you, they get the very best.”

Maj. Gen. Don Dunbar, Wisconsin’s adjutant general, was quick to credit the communities, families, and employers that support the National Guard and its Soldiers. Without the support of any one of those three elements, he said, the Guard simply could not succeed.

“You can see the pride in their eyes,” Dunbar said. “And I know there’s a little bit of nervousness, but I want to ensure each and every one of you that these Soldiers are ready. This command team and our United States Army has made sure they’ve gotten and will get the best training possible, or we wouldn’t send them. They’re the best at what they do.”

Gov. Tony Evers also noted the service and sacrifice of the larger Wisconsin community, the families, and the state’s employers.

The governor said that the entire state is behind the Soldiers of the 128th.

“I, along with millions of other Wisconsinites will be thinking of you and praying for your safe return each and every day,” he said. “To your family members, we pledge our support to you as well. You bear an incredible amount of the burden when your Soldier is deployed, and we are obviously grateful for all that you do.”

Approximately 70 Airmen from the Wisconsin Air National Guard’s 128th Air Refueling Wing in Milwaukee celebrated the completion of a series of successful global deployments in October 2018, and a group of Airmen from the 115th Fighter Wing are currently deployed in support of global contingency operations.

The Wisconsin National Guard simultaneously stands ready to complete its state mission of assisting civil authorities during times of emergency as the state’s first military responder.

Last fall, UH-60 Black Hawk medevac crews deployed to the North Carolina to assist civil authorities there in the wake of Hurricane Florence, and hundreds of Guardsmen assisted with sandbagging efforts in south central Wisconsin after torrential rains soaked the state in late August and early September.