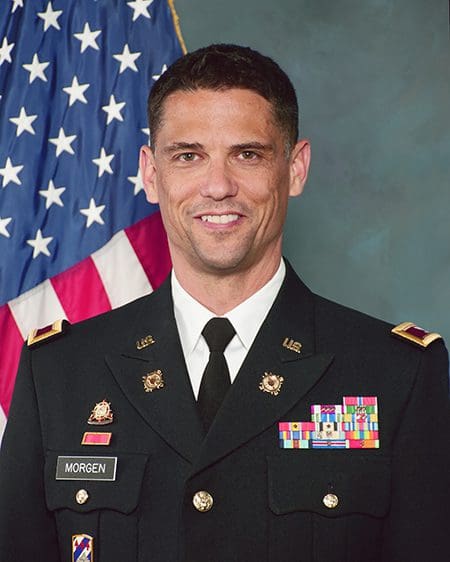 Col. John Morgen took command of the Wisconsin Army National Guard’s most diverse brigade, the 64th Troop Command, May 3. To understand the scope of that responsibility — specifically, maintaining readiness among units boasting a vast collection of skills that support both federal and state missions — a more detailed look at the diversity of the 64th is required.

For some perspective, the Wisconsin Army National Guard’s 32nd Infantry Brigade Combat Team and the 157th Maneuver Enhancement Brigade each have subordinate units with different skillsets — but those different skills are applied to accomplish a common mission.

The 64th Troop Command does not have an infantry mission, nor is it responsible for ensuring that deployed units can maneuver through a particular stretch of territory overseas. Its battalions — and in some cases, the units within battalions — have important missions with seemingly no connective tissue to each other: the 1st Battalion, 147th Aviation Regiment, the 732nd Combat Sustainment Support Battalion, the 54th Civil Support Team, and the 641st Troop Command Battalion.

The 641st is itself a diverse array of specialized units: the 132nd Army Band, the 112th Mobile Public Affairs Detachment, the 135th Area Support Medical Company, the 273rd Engineer Company, the 457th Chemical Company, the 1967th Contingency Contract Team, and a medical detachment. Elements of some of those units combine to make an enhanced response force package for chemical, biological, radiological, nuclear and high-explosive events (CERFP).

Small wonder, then, that the brigade motto embraces its diversity as a unifying battle cry — “Any Mission, Any Time, Any Place.”

The key to being “always ready, always there,” Morgen said, is a professional mindset.

“The diverse and independent nature of the respective battalions within the 64th Troop Command are all united by their commitment in developing an organizational culture rooted in the Army values and profession of arms,” Morgen said. “I intend to place an emphasis on 64th Troop Command core principles, which include sound mission command, a vibrant and professional organizational culture, and Soldier development.”

Morgen’s vision of creating an agile and adaptive organization involves disciplined initiative and building cohesive teams through mutual trust. He said he wants every Soldier in the 64th Troop Command to take pride in contributing to a level of professionalism that facilitates greatness. That is achieved, he said, by placing a premium on caring for Soldiers and developing them as leaders.

“The strength and readiness of our units, families and employers will depend on the investment we make in each other,” Morgen explained, noting that the brigade is filled with authentic leadership opportunities.

Morgen has served in the Wisconsin National Guard for 27 years, and earlier this year returned from a Southwest Asia deployment as the executive officer for the 157th Military Engagement Team. That team built stronger partnerships with Kuwait, Jordan, Saudi Arabia, Oman and the United Arab Emirates through joint military exercises, military-to-military non-training engagements, and assessing partner nation military capabilities.

Morgen is also the head coach for the Neenah High School cross-country team, and brings some of that coaching mentality to his role as commander of the 64th Troop Command.

“I sometimes tell my athletes just prior to their 5K race that they get to be the author and hero of their story,” Morgen said at the May 3 change of command ceremony. “Soldiers of the 64th Troop Command, we get to be the heroes of this story. Will our story be about creating possibilities, of making each other better at the team, squad, platoon, company, battalion and brigade levels? Will our story be about building relationships, enhancing partner capacity, building interoperability both here and abroad?

“As the most diverse brigade in the Wisconsin Army National Guard, we can all play a key role in this story,” he continued. “Together, we can do great things on behalf of our local communities, state and nation.”

Morgen followed Col. Dennis Konkel, whose nearly 33-year military career concluded with a four-year command of the 64th Troop Command. As a member of the 32nd Infantry Brigade Combat Team headquarters company, Konkel deployed to Kuwait in 2005 and again in 2009 to Iraq. Konkel also retired from 25 years with the Milwaukee County Sheriff’s Department at the rank of captain.

“Col. Konkel’s emphasis on leadership development, professionalism and empowering service members at all levels has helped create a scalable, tailored, adaptable and ready force,” Morgen said. “I’m committed to carrying on his efforts and the rich legacy left by the previous commanders of the 64th Troop Command.”