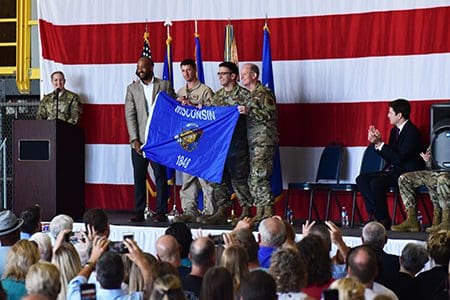 The Airmen, along with a number of the unit’s F-16 Fighting Falcon aircraft, will spend the next several months based in Afghanistan conducting flying missions in support of Operation Freedom’s Sentinel and NATO’s Resolute Support. This mission underscores the Wisconsin National Guard’s readiness to serve as the nation’s primary combat reserve.

“As Americans we owe both you and your families a debt of gratitude for all that you do to keep our nation safe and secure,” Barnes said.

Steil also expressed his gratitude to the deploying Airmen.

“The bravery of Wisconsinites is something that is deeply rooted and something that I know is in all of your hearts,” Steil added. “As you embark on this mission, remember your Wisconsin roots at home, On Wisconsin.”

The significance of the support Guardsmen receive from their families and employers was a recurring theme throughout the event. The message was punctuated with the introduction of 115th Fighter Wing Airman and Family Readiness Program Manager Jerry Hook, who stands available 24/7 to assist the deploying Airmen’s loved ones with any issues that may arise in their absence.

Senior Master Sgt. Holly Sieja, cyber systems superintendent for the 115th Communications Flight, attended the ceremony to send off her daughter, Senior Airman Isabella Jansen, as she departed on her first overseas deployment.

“Nothing can eliminate the worries associated with your child deploying into harm’s way,” Sieja said. “But it helps to know she is part of a cohesive team of Airmen that look out for one another.” 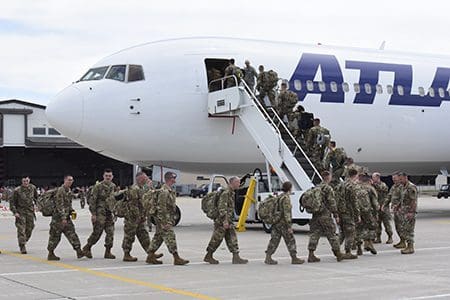 According to 115th Operations Group Commander Col. Jon Kalberer, the exceptional training available to pilots and maintainers at Truax Field and within the Volk Field military operating area contributes immeasurably to their readiness to deploy.

“Our Airmen have the opportunity to train with members of different services in an environment that simulates our deployed location,” Kalberer said. “This training allows our deployed Airmen to arrive in theatre and immediately provide dominant combat airpower as part of the total force.”

“Our training is precise, plentiful and extremely thorough,” Twohig said. “It’s prepared us to operate under any circumstance, or in any environment. It’s also given me the confidence to execute our mission safely and effectively.”

Maj. Gen. Don Dunbar, Wisconsin’s adjutant general, thanked the Airmen and their families for their service and sacrifice during his remarks.

“What these men and women before you have done is volunteered to serve our country,” Dunbar said. “They have endured the rigor of hard training, earned the right to wear this uniform, and they knew that when they raised their right hand that this day might come where they would have to head off to a difficult part of the world. They are simply the finest Airmen that our nation has to offer. They are exceptional.”

“To the Airmen of the 115th, I assure you when you get overseas that your training will kick in and the Airman that you are, highly skilled, highly trained, will realize you are part of something very special and ready to do your mission,” he added. “I have no doubt in your mission and your ability to accomplish it.”

Following the ceremony, Airmen spent time saying their final goodbyes to family and friends before boarding the plane that would carry them nearly 7,000 miles from home.

“So many times we take our freedoms for granted,” Barnes said to the formation of deploying Airmen. “You above all are intimately aware of the cost of freedom, and the sacrifices to preserve it.”