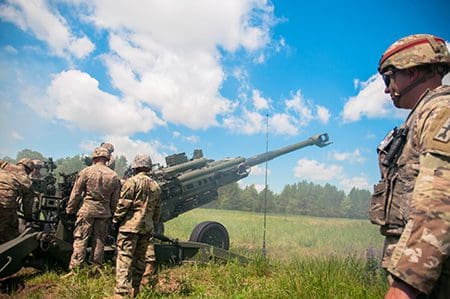 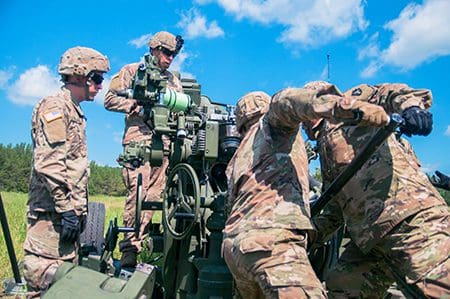 Students from all three courses at the RTI learned how to combine those skills for a live-fire exercise July 27 — a rare training opportunity in most environments, but common at the 426th.

“It’s perfect how they did it. I didn’t expect it at all,” Sgt. Jake Rizkallah, an advanced leader course student, said about the design of the course. He anticipated primarily classroom work, and when it came time for the live-fire exercise, he thought he would have to build a full team solely from his class of section chiefs — but that wasn’t the case.

“When we realized we were [going to work with the other students], it really amped up what we were expecting [to be capable of]. It was about as good as it can get,” Rizkallah said. 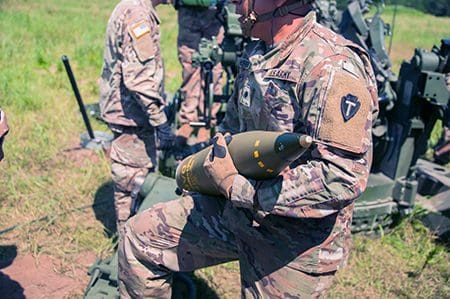 The advanced leader course is 24 days while the cannon crew member reclass and the fire support specialist courses are about 21 days long, so Soldiers have a few good weeks to build relationships, learn from each other and grow together as a team. Sgt. Austin Topolski, a student in the cannoneer course assigned to Rizkallah’s fire team for the live-fire exercise, was also excited about the arrangement.

“It was nice to bounce ideas and questions off the ALC students,” Topolski said.

A former Marine Corps diesel mechanic, Topolski joined the Michigan National Guard in 2018. He decided to learn an entirely new occupation and start a career as a cannon crewmember.

“I always made fun of field artillery until I got into it, and this is actually good work,” he said. “I trained hard and got as much out of it as I could. [The job] makes you tired really quick, but it’s a lot of good fun with a good group of guys.” 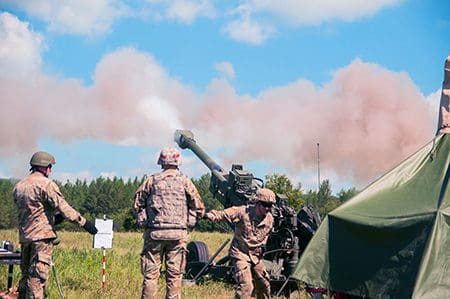 “If I take a [position as a section chief], I’ll be going over to his battery,” Rizkallah said. “And I didn’t know him before we got here.”

It isn’t a surprise for students training together here to work with each other at their assigned units or in a deployed environment. Because of this, camaraderie and teambuilding are just as important as the mechanical skills students gain.

Depending on the number of students per year, “we try to design courses concurrently to utilize the experiential learning model method of instruction within our courseware,” said Staff Sgt. Matthew Schoff, a field artillery instructor with the 426th RTI. “We also utilize peer-to-peer instruction to build upon leadership skills and trust among the students while the instructor facilitates the learning.”

With the One Army School System, the 426th RTI receives students from active duty, Reserve and National Guard components for each course. About 40 of the students graduating are from the National Guard or Reserve component.

“This schoolhouse really prides itself on the number of students and the quality of training that these students get from us,” said Schoff, who has personally graduated more than 500 students. On July 29, the 426th RTI graduated 49 students between the three courses: 18 will be section chiefs, 18 will be cannon crew members and 13 will become joint fire support specialists.

The advanced leader course is designed to certify section chiefs who will lead their own cannon crews at their assigned duty station, and is also a part of the Army’s noncommissioned officer education system for Soldiers seeking the skills and qualifications they need for promotion to the rank of staff sergeant. The final graduation requirement was to safely chief four rounds of team live fire with a M777A2 155-mm howitzer, one of two types of cannons students fired during their live fire exercise.

Each howitzer operates with a crew of eight Soldiers. Everyone has their own, definitive role — running for ammo and propellants, loading the cannon, or communicating with the fire direction center. The section chief makes sure everyone is doing their job safely and to standard.

“The section chief is really here just to verify safety on everything,” Schoff said. “We train everyone going to the [advanced leadership] course that ‘Your job is to verify safety. You’re the staff sergeant — you no longer help with everything that your crew is doing. Safety is always the first in line. It does no good to help your crew out if you lose sight of safety.’”

When the action started, Rizkallah took a position close enough to see every moving part and far enough away to let his crew do their work. Topolski’s job was to drop the loading tray after the ammo was loaded and wait for standby. When everything was clear, the “number one” cannoneer pulled the lanyard to launch a 93-pound, 155-mm projectile at a maximum range of 24.7 kilometers into the barren hills of Fort McCoy’s artillery range.

The students switch positions to get hands-on experience with every skill and task they’ve learned. Once the rounds start firing, it’s clear they received the training they needed to become a seamlessly executed, well-oiled machine. The standard for the M777A2 Howitzer is three rounds per minute for three minutes, and the Soldiers with the 426th RTI met the standard during their final live-fire exercise.

“I love field artillery because it’s a very team-oriented [military occupational specialty],” Schoff said. “Everybody needs to be strong and able to work together to make it happen.”