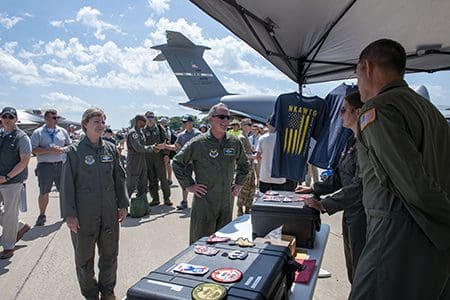 OSHKOSH, Wis. — A joint force of Soldiers and Airmen from the Wisconsin Army and Air National Guard played a key role in securing military assets on display at the world’s largest air show.

Every year Wittman Regional Airport in Oshkosh becomes the busiest airport in the world for the weeklong EAA AirVenture, which this year ran July 22-28.

Throughout the air show more than 601,000 people from around the globe came to AirVenture to experience a wide variety of aircraft and aviation-related activities. 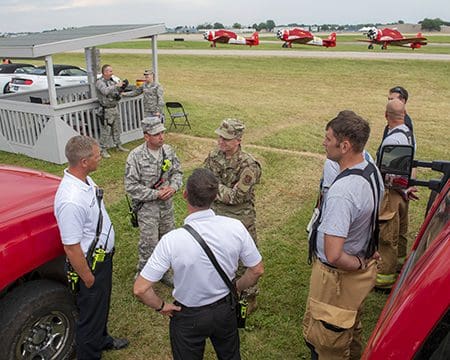 Maj. Gen. Donald Dunbar, Wisconsin’s adjutant general, talks with firefighters from the 128th Air Refueling Wing and the Oshkosh Fire Department July 26 during EAA AirVenture in Oshkosh Wis. Throughout the weeklong airshow the firefighters were on standby in case there was an emergency. 115th Fighter Wing photo by Airman 1st Class Cameron Lewis

To showcase and provide familiarity with military aviation the U.S. Military had multiple aircraft on display as well as three demonstration teams and a Wisconsin Air National Guard KC-135 Stratotanker from Milwaukee’s 128th Air Refueling Wing.

With over $1.3 billion worth of military assets at the event, it was up to approximately 70 Wisconsin citizen Soldiers and Airmen to protect and facilitate the movement of these vital assets, while also creating awareness about our hometown forces. 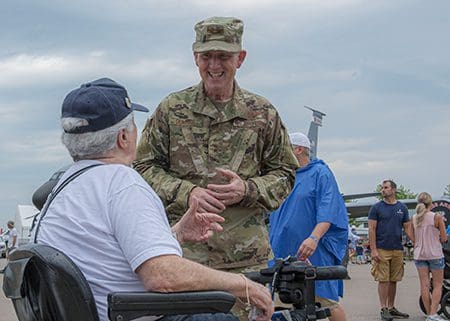 “Upon arrival the C-5M Super Galaxy had what we believe hydraulic fluid ignite from the hot brakes creating a fire in the wheel well,” said U.S. Air Force Master Sgt. Ronald Simon, the fire chief for the 128th Air Refueling Wing in Milwaukee. “If it wasn’t for the quick reaction between us (the 128th firefighters that were on scene supporting the event) and Oshkosh Fire Department it could have been a lot worse.”

While the local service members were actively working the event they also created awareness about the Wisconsin National Guard.

“A lot of locals have come up asking why Wisconsin is on the tail of our aircraft,” said Master Sgt. Peter Gauerke, a boom operator with the 128th Refueling Wing. “Being here has allowed us to provide awareness and inform the public of the ongoing military operations in the state.” 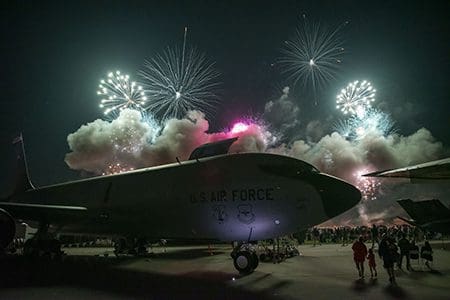 A Wisconsin Air National Guard KC-135 Stratotanker assigned to the Milwaukee-based 128th Air Refueling Wing is backlit by a fireworks display on Boeing Plaza July 27 at EAA AirVenture in Oshkosh. The refueler and its crew were at AirVenture all weeklong to provide awareness about their mission. 115th Fighter Wing photo by Airman 1st Class Cameron Lewis

With nearly 10,000 Soldiers and Airmen, three Air National Guard bases and four Army National Guard major commands in the state, the Wisconsin National Guard is a considerable force that is here not only to defend the country but to support civil authorities during times of emergency.

“I had no idea there was such an active military presence in Wisconsin,” said a Green Bay resident attending AirVenture. “I’ve always seen military aircraft doing touch and goes in and out of Green Bay but thought they were just an active-duty unit training from outside the state.”

Being able to create that awareness and share information about the Wisconsin Guard at AirVenture not only allowed community members to better understand the Guard’s mission, but it also sparked an interest in young people wanting to join the Guard as well.

“This event is great for us to be able to provide awareness and recruitment opportunities,” said Tech. Sgt. Elvis Alvarado, a production recruiter for the 128th Air Refueling Wing. “There are all sorts of people coming up to us with questions about the Air National Guard and what steps they need to take to become a future Airmen.”

With AirVenture’s theme this year being the “year of the fighter” it simply would not have been the same without the large support and attendance of military personnel and aircraft.

“EAA AirVenture visitors had a chance to see a side of the Wisconsin National Guard that is sometimes overlooked,” said Maj. Gen. Don Dunbar, Wisconsin’s adjutant general. “Beyond the equipment and training, we have the men and women in uniform who network with local agencies — sometimes in response to storm damage or civil unrest, and sometimes to ensure overall safety for events like this that draw thousands of people. By providing this assistance to AirVenture we improve our ability to ensure the safety of our citizens whenever we are called to do so. And we should remember that these men and women from communities across the state put their lives on hold to answer the call from the governor or from the president. To me, that’s just as impressive as the aircraft on display here.”