Communities, National Guard rally together to recover from devastating storms 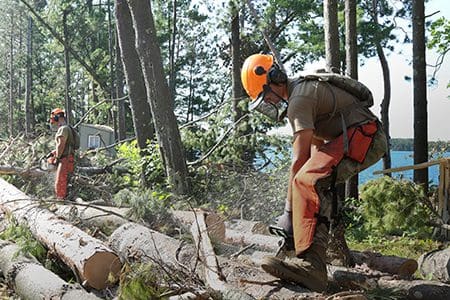 BALSAM LAKE, Wis. — Residents of Northern Wisconsin affected by the severe weather that swept across the state July 19-20 have come together to support each other and express their gratitude for the National Guard as recovery efforts continue.

Elements of the Wisconsin Army and Air National Guard mobilized to Polk, Barron, and Langlade counties in response to Executive Order 35 issued July 21, which declared a statewide state of emergency following the torrential rains and tornados the days prior. The order authorized Maj. Gen. Don Dunbar, Wisconsin’s adjutant general, to mobilize the National Guard to assist civil authorities as needed. Approximately 100 Soldiers and Airmen remain on state active duty in the aftermath of the storms supporting damage assessment and debris removal operations in Polk and Barron counties. National Guard troops concluded a debris removal mission in Langlade County last week after previously distributing water in Langlade County in the days immediately following the storms. 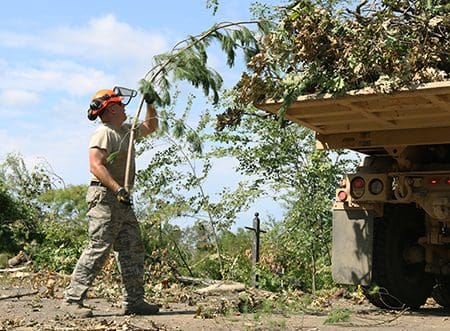 Chad Roberts, chief deputy of the Polk County Sheriff’s Office as well as incident commander and acting emergency manager, assessed the damage of the storms that swept through the county.

“For Polk County the damage was severe — about 350 homes have been affected,” Roberts said. “From what people have told me, this is the worst they’ve seen in 30-40 years.”
Due to the extensive nature of the damage — which consisted of thousands of downed trees, many of which fell across roadways — local officials requested additional state assistance to help clear public rights-of-way and ensure emergency vehicles could operate freely.

Enter the Wisconsin National Guard, which mobilized approximately 100 troops to assess the damage, develop a scope of work, and clear the way to the point that public safety operations had unhindered movement. Those Soldiers and Airmen have spent the past two weeks using chainsaws to cut through the debris, haul some of it away, and chip the rest in place.

Roberts spoke about the crucial role the National Guard plays in the aftermath of destructive weather serving as a supplement to overwhelmed county services until contractors are coordinated, and providing reassurance to a community when they need it most.

“There is a peace of mind that citizens get when either uniformed troops or police officers arrive,” Roberts explained. “With the troops, we’re getting something done right away. These things take awhile to spin up. The general rule is 72 hours on your own, so with the Guard being able to come in within a couple days — that shows a much quicker response and delivers a blanket of security to citizens.”

Roberts also commented on the support he’s witnessed between the Wisconsin Guard and his community. 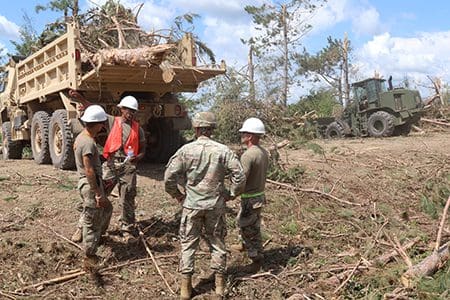 “I think it’s times like this where communities come together,” Roberts continued. “I think that’s a very positive effect that comes from it. And it also helps people understand why we have the Guard in the first place. Instead of just seeing the troops get on and off the planes to Afghanistan, they see the other purpose, the dual purpose, of the National Guard.” 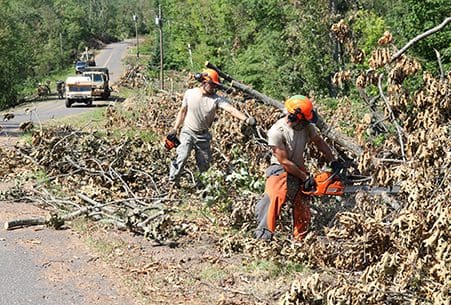 McDonald detailed the course and the necessity of recovery operations as the teams push through their assigned areas of work in response to official requests for assistance.

“You can see, it’s tight on the roadways now,” McDonald said, pointing to piles of tangled branches stacked on the shoulders of the roads surrounding Half Moon Lake in Milltown, Wisconsin Aug. 1. “When we first arrived, the debris was in the streets. Some roads were down to one lane. Now that we’ve moved it to the ditches, we need to free up the shoulders. We want to ensure freedom of maneuver. It’s about creating safe pathways for emergency responders and civilians.”

Meanwhile, local community members have been grateful to have the National Guard’s assistance.

American Legion member and Korean War Veteran Al Jorgenson and his wife, Ann, are residents of Balsam Lake, Wisconsin. Their neighborhood surrounding White Ash Lake felt the direct effects of the storms. Ann described the severity of the impassible roads — civil authorities making welfare checks notified the Jorgensons that in an emergency, the couple could only be reached by helicopter.

“Our home is okay, but if we looked out the window it was like an artillery barrage,” Ann said. “We couldn’t get out of our driveway.”

The Jorgensons expressed their thanks to the Soldiers and Airmen participating in the response by helping prepare and serve a dinner hosted Aug. 2 at American Legion Post 98 in Cumberland.

Ann Jorgenson, resourceful from her days cooking chicken noodle soup over the grill during what she described as the “hungry ‘30s” as a girl, was still glad to see the Soldiers, Airmen, and her community members rally to provide assistance.

“The National Guard has been all over in the area,” Ann said. “We’re grateful for anything. In emergencies, you never know where your help will come from.”

In addition to the National Guard, she was grateful to other members of the community that have rallied together to lend a hand as well. According to Ann, a Christian youth group of 18 teens volunteered to clear debris, and a man named Mike called and told the Jorgensons that he was a “veteran who wanted to help a veteran.”

“He came over with a big truck and a forklift and worked for hours,” Ann said. “We’ve never seen him before.”

Her sense of appreciation for the acts of kindness shown by her community was buoyed by the presence of Soldiers and Airmen clearing roadways and ditches to provide safe pathways for civilians and emergency responders.

“Mentally, to know that help is on the way, that the National Guard is out there, it brings a feeling of safety and security,” Ann continued. “Just knowing they are out there and are physically moving what they can.”

Melissa Wosmek, a part-time resident of Balsam Lake with a cabin near Loon Lake, volunteered with the Salvation Army and handed out popsicles to service members working along the road with her daughter in tow, Aug. 3. Pausing for a break, Wosmek expressed the seriousness of the threat the debris posed for her community.

“This whole experience has been devastating,” she said, gesturing to the open roadway lined with piles of debris and the spiked trunks of felled trees. “I would run this three-mile loop. It was mostly shade. Now, it’s full sun. Not everyone is able-bodied up here. When we saw [the National Guard] come in…it just felt like we’re not out here alone in the woods.”

Rita McKee, a newer resident of Balsam Lake, felt the full support of the community she joined just a few short years ago. She and others on her street suffered substantial property damage wrought by the severe weather.

McKee recounted her amazement at the destructive power of the storms and the feeling of relief brought on by the kindness of her neighbors and the presence of the Wisconsin National Guard.

“First of all, it’s humbling to see how devastating wind can be — how vulnerable we are as human beings,” McKee said. “These were big, old, strong trees — birch, pine, spruce, oak — and they were snapped in half. It was humbling and I was awe struck.”

“As a widow, my community rallied to help me,” McKee continued. “My church, everyone, they were wonderful. And to hear the Guard was coming and then to see them out there chipping, it was amazing. It felt like you’re not alone anymore. It was beautiful.”

Sgt. David Mendez, a horizontal construction engineer with 2nd Platoon, Company B, 173rd BEB, and team leader for clearing and hauling debris along a section of road around Loon Lake, brought the Guard’s training, a community’s need, and the power of a good cause full circle.

“When we first arrived, people couldn’t get to their homes,” Mendez said, pausing to direct the driver of a front end loader to the next pile of debris prepped for haul and removal. “We were clearing pathways for power line crews to get in and restore power. Now, we’re removing the debris we were able to clear from the road.

“We are constantly training and now we can emphasize how important those skills are,” he continued. “This is not training. There is no room to mess up. There are roads, power lines, and other obstacles that are difficult to replicate in training. Now they can see and understand why our training is so important. These people need our help.”

Mendez noted that the Soldiers and Airmen serving on state active duty have sacrificed time away from school, work, families, or other commitments.

“My Soldiers put their lives on hold,” Mendez explained. “They sacrifice a lot to come here, and seeing that their efforts are supporting a good cause means something.”

The impact of the assistance provided by Mendez, his Soldiers, and the rest of the Soldiers and Airmen with the Wisconsin National Guard has been felt by communities across Northern Wisconsin.

McKee held up her cellphone to show a video she’d received from her neighbor of 173rd BEB Soldiers clearing debris from the road near her home, captioned: “Our National Guard at work.”
“To see them go by, I almost get choked up,” she said. “It’s really special. When I look outside I think, ‘Gosh, there’s a lot of work to do yet.’ But I know they will stay until the job is done.”