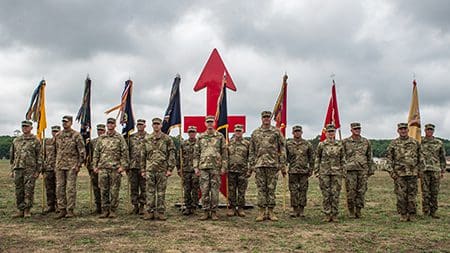 The brigade headquarters, based in Camp Douglas, will deploy in support of the Joint Multinational Training Group-Ukraine, where it will serve as the headquarters element overseeing a group of multinational “partner and advise training teams” – or PATTs – based at the International Peacekeeping and Security Center in western Ukraine.

The Red Arrow Soldiers will work alongside several NATO allies to assist in building professional units capable of defending Ukraine’s sovereignty and territorial integrity. Since 2015, U.S. Army Europe has trained and advised Ukrainian security forces in western Ukraine by mentoring Ukrainian cadre and assisting in the development and enhancement of ranges and training areas.

The Wisconsin National Guard is planning a sendoff ceremony for the deploying troops and will release those details at a later date.

The deployment comes at a time when approximately 800 other Red Arrow Soldiers from the 32nd Infantry Brigade Combat Team are deployed with both the Appleton-headquartered 2nd Battalion, 127th Infantry and the Eau Claire-based 1st Battalion, 128th Infantry. The 127th remains deployed to Afghanistan, while the 128th mobilized in July in preparation for its own mission in Afghanistan.

The 32nd has a long and distinguished lineage in the annals of Wisconsin military history. Its units, including the 127th and 128th Infantry, trace their lineage back to the Civil War, where they made up part of the famed Iron Brigade, which included three Wisconsin infantry regiments as well as one from Indiana and one from Michigan. The 127th and 128th trace their roots to the 1st and 2nd Wisconsin Volunteer Infantry Regiments, and their respective battalion colors still bear battle streamers from places like Bull Run, Antietam, Gettysburg, Chancellorsville, Spotsylvania, Cold Harbor and many others.

The 32nd “Red Arrow” Infantry Brigade Combat team’s lineage begins with the formation of the 32nd Division, which formed a little more than a century ago as the United States prepared to wade into the First World War in Europe. In 1917, the 1st and 2nd Wisconsin Volunteer Infantry reorganized into the 127th and 128th Infantry Regiments of the 32nd Division along with the rest of the Wisconsin National Guard and troops from the Michigan National Guard.

The division went on to great fame in the Great War, as chronicled in the Wisconsin National Guard’s commemoration of the centennial of the 32nd’s service in World War I – Dawn of the Red Arrow. As it fought its way through France, the 32nd Division earned its now famous “Red Arrow” nickname for piercing every enemy line it encountered. The division played a starring role in the division’s four major campaigns during World War I and earned the Croix de Guerre from the French government along with the nickname, “Les Terribles,” for its ferocity in combat.

The Red Arrow again played a major role as American forces fought to victory in the Pacific Theater during World War II, where the division spent more days in combat – 654 – than any other division in the war as it fought through brutal campaigns in New Guinea, the Philippines, before eventually serving as an occupation force in Japan.

In the early 1960s, the Army called on the Red Arrow again to mobilize during the height of the Berlin Crisis. The division spent a year at Fort Lewis, Washington, readying for a fight that never came to blows between the Soviet Union and the west in Europe, and in 1967, the 32nd Division reorganized as the 32nd Infantry Brigade. The brigade continues to carry the lineage and legacy of the division, with battle streamers from the division’s service in World War I, World War II, and Iraq adorning its colors.

The Red Arrow has long fulfilled its role as a key component of the Army’s primary combat reserve while simultaneously serving alongside its brothers and sisters in arms across the Wisconsin National Guard as the state’s first military responder during emergencies.

Red Arrow elements mobilized on many occasions to support civil authorities here in Wisconsin or elsewhere such as in 2017, when more than 600 Soldiers from the brigade deployed to Florida to assist civil authorities with security, traffic control, and humanitarian assistance in the wake of Hurricane Irma. In recent weeks, Red Arrow troops joined Airmen from the Wisconsin Air National Guard and other Wisconsin Army National Guard units in clearing debris in Polk, Barron, and Langlade Counties after severe storms devastated those counties in late July. And last year, hundreds of Guardsmen assisted with sandbagging efforts in south central Wisconsin after torrential rains soaked the state in late August and early September.

The Wisconsin National Guard continues to maintain a high operations tempo with other worldwide deployments in support of its federal mission. In addition to the deployed Red Arrow Soldiers of the 1st Battalion, 128th Infantry and 2nd Battalion, 127th Infantry in Afghanistan, more than 250 Airmen from the Wisconsin Air National Guard’s 115th Fighter Wing deployed to Southwest Asia in July.