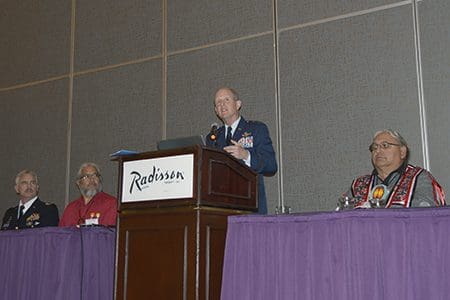 The event, organized by the National Tribal Emergency Management Council, was held at the Radisson Hotel and Conference Center and hosted by the Oneida Nation. It seeks to bring together tribal, state, local, and federal officials, along with private sector partners, to learn about best practices in the field of emergency management and to improve communication between the tribes and their partners.

“By bringing all of our partners together, this becomes a forum in which we’re able to educate one another on tribal issues, and how the federal and state governments are working with the tribes to resolve those issues,” said National Tribal Emergency Management Council executive director Lynda Zambrano. “Sharing that information helps our tribal nations build internal infrastructure and capacity.”

Maj. Gen. Don Dunbar, Wisconsin’s adjutant general and homeland security advisor, was among several featured speakers at the conference. He provided an update on the many functions the Wisconsin Department of Military Affairs performs in the state and how it interacts with Wisconsin’s tribes.

“It is our business to prepare and develop emergency plans for all of Wisconsin’s citizens, including the tribal nations,” Dunbar said.

The adjutant general detailed the missions the Wisconsin National Guard has undertaken in recent years, including debris removal operations in Polk, Barron and Langlade counties following severe storms in July, and the role Wisconsin Emergency Management (WEM) plays in helping counties and tribes access the resources they need to respond to disasters in their areas.

He also discussed ongoing efforts to protect the state’s cyber infrastructure, upgrade emergency communications systems, and assist the Wisconsin Elections Commission with efforts to provide certainty about the security of voting in the state. During the 2018 election, that assistance included having a National Guard cyber response team mobilized, providing public information assistance to the Wisconsin Elections Commission, and establishing backup phone support for election-related issues.

“At the end of the day, what you really want is the people of Wisconsin to have faith in the outcome of the election,” Dunbar said.

Dunbar also pointed to the critical role WEM and its partners play in conducting exercises that test disaster response plans.

“That’s the best way for us to get better,” he said. “We try to figure out where the breaking points are so we can fix that, so when we face a real event, we will be able to do better in the future.”

Those exercises have included tribal involvement, such as during the state’s Dark Sky exercise in 2018. The scenario tested response plans to a massive power outage affecting a large portion of Wisconsin. Members of the Oneida Nation took part in portions of the exercise that were conducted in east central Wisconsin and Oneida Nation emergency management director Kaylynn Gresham said it is not uncommon for the state to include them in such activities.

Zambrano said that level of cooperation and communication is an example of the reasons why her organization decided to bring the national conference to Wisconsin.