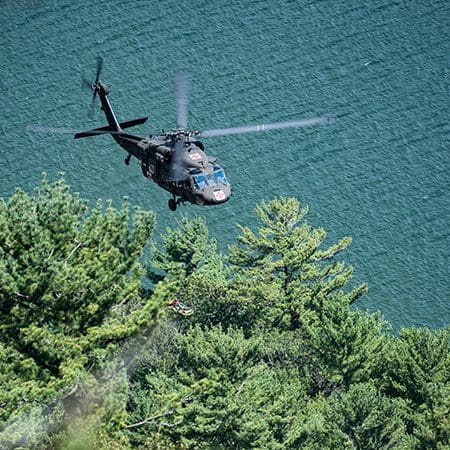 A Wisconsin National Guard UH-60 Black Hawk helicopter lowers a stretcher during hoist operations as part of an interagency search and rescue exercise August 29th at Devil’s Lake State Park in Wisconsin. The exercise aimed to increase and practice the coordination, policies, and procedures to request and use air assets for search and rescue. Wisconsin National Guard photo by Staff Sgt. Alex Baum

BARABOO, Wis. — An August 29 exercise conducted at sites throughout south central Wisconsin led to new interagency relationships and better understanding of the tools emergency managers have at their disposal during search and rescue operations. 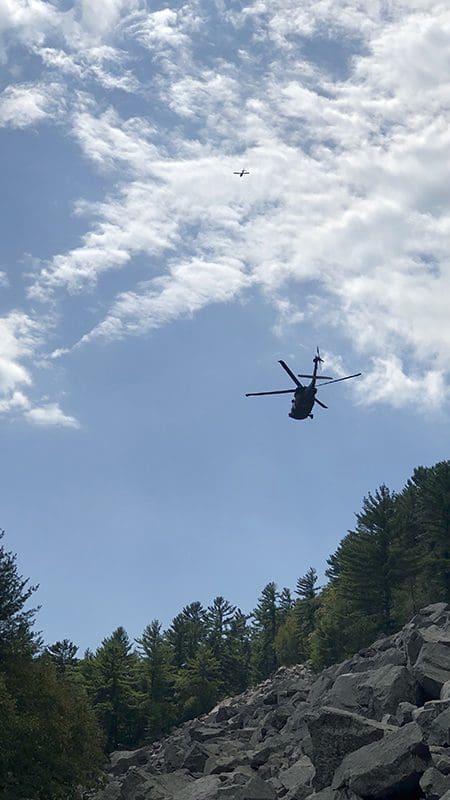 A Wisconsin National Guard UH-60 Black Hawk helicopter and a Civil Air Patrol aircraft combine capabilities to find a simulated lost hiker as part of an interagency search and rescue exercise August 29th at Devil’s Lake State Park in Wisconsin. The exercise aimed to increase and practice the coordination, policies, and procedures to request and use air assets for search and rescue. Wisconsin National Guard photo by Staff Sgt. Alex Baum

The exercise at Devils Lake involved an immobile patient in need of airlift from the steep cliffs that surround the lake. In the scenario, a ground team made contact with the patient after an aerial search that involved a fixed-wing aircraft from the Civil Air Patrol and a UH-60 Black Hawk helicopter from the Wisconsin Army National Guard. The UH-60 hovered over the landscape and eventually plucked the manikin from the cliffs and flew it to safety.

“Our rope rescue team uses rope systems to extricate or rescue somebody from on the cliffs,” said Mark Willer, a lieutenant with the Baraboo Fire Department who led a rope rescue at Devils Lake. “Today, we used a helicopter. So it’s definitely opened our eyes. It’s expanded the toolbox. It’s awesome that we have this resource that’s available to us, and today we’re practicing to iron out the details if we were to actually do this for a real mission.” 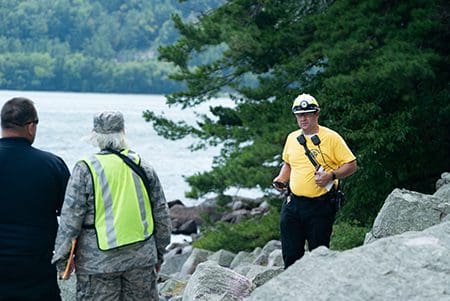 Baraboo Fire Chief Kevin Stieve coordinates rescue operations with members of the Civil Air Patrol and other local first responders, serving as the Incident Commander as part of an interagency search and rescue exercise Thursday at Devil’s Lake State Park in Wisconsin. The exercise focused on the communication and coordination aspects of a search and rescue operation that exceeded capabilities of local first responders. Wisconsin National Guard photo by Staff Sgt. Alex Baum

But as Willer said, the exercise was not designed to simply practice what to do if such a scenario played out in real life at Devils Lake. It was designed to test the ability of different agencies from different echelons of state and local government or other non-governmental agencies to collaborate and communicate effectively and ultimately coordinate rescue operations.

“The scenario isn’t just for Devils Lake,” he said. “We really want people to know that this situation could be statewide. The National Guard serves our state, and we use them anywhere. So we were fortunate enough that Baraboo Fire and Baraboo EMS have Devils Lake in our backyard and to have the National Guard come in and do the hoist operations on these bluffs, which I was told is a difficult hoist operation.

“So we really just wanted to practice the operation as a whole,” he continued. “It wasn’t so much that this is what we’re going to do at Devils Lake every time. Our rope rescue team can still do the majority of the rescues, but if we ever do have a situation where somebody’s so critical that they can’t move, and we absolutely have to get them help by helicopter, we can use the resources we have.” 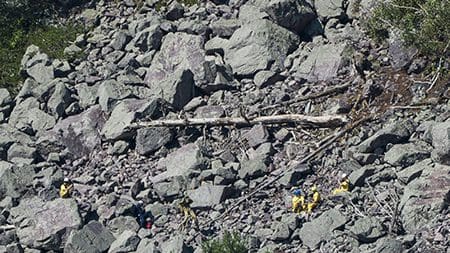 Members of the Baraboo Fire Department Ropes Rescue Team coordinate with a Wisconsin National Guard flight medic before hoisting a simulated casualty as part of an interagency search and rescue exercise August 29th at Devil’s Lake State Park in Wisconsin. The exercise aimed to increase and practice the coordination, policies, and procedures to request and use air assets for search and rescue. Wisconsin National Guard photo by Staff Sgt. Alex Baum

Exercises such as these offer an invaluable opportunity for participants to work through the issues like communications and others common to complex emergency responses. But perhaps the greatest takeaways from this sort of exercise are the relationships built between organizations that could someday work together in a real-world response.

“I think it’s the relationships,” Willer said. “We grew the relationships. I didn’t know any of these military people before I started, and now I’ve met many. I’ve talked with them. I’ve learned from them, and I think our relationship is going to get stronger as we work more together and possibly do future training exercises and then having a good strong relationship if we were to ever need them in real life for a real-life rescue.”

“We do these training exercises so that if we have to do this in real life, it goes more smoothly,” Graham said. “There’s a lot of different agencies between State Patrol, Civil Air Patrol, the Drone Network, Wisconsin National Guard aviation, and then Wisconsin Emergency Management and then a couple of volunteer civilian organizations. So there are a lot of friction points and opportunities for things to go wrong, so by doing it here, it lets us identify all of those issues that need to be thought about ahead of time so, like I said, when we do this in real life, it goes smoothly.”

Graham pointed out the cooperation between agencies and the logistics that goes into holding such an exercise, noting that it takes a team effort to conduct such realistic and valuable training.

“Today was a great learning opportunity,” he added. “We had three different search locations. We had a lot of different moving parts and a lot of different agencies, so everybody learned some stuff, nobody got hurt, and I think we’re better prepared if we had to do this in real life.”

Graham and other aviation assets in the Wisconsin National Guard and other law enforcement and civilian organizations are part of Wisconsin’s Air Coordination Group, which works together in emergency situations. For the National Guard, assisting civil authorities during emergencies in such a capacity is one of its core missions.

Such skills were put to the test just last fall, when a UH-60 Black Hawk from the flight facility in West Bend was called to a marsh near Fond du Lac to rescue a pair of kayakerswho became disoriented and stranded.

Thanks to these sorts of exercises, first responders, the National Guard, and emergency managers already have a head start on preparing for the next emergency.