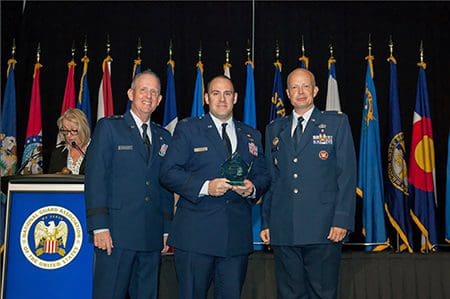 Kelly, a Wisconsin Air National Guard member for 11 years, had served as air battle manager with the 128th Air Control Squadron at Volk Field, Wisconsin. Presently he is on a four-year active-duty developmental tour through the National Guard Bureau, serving as the chief of contingency plans at First Air Force Headquarters at Tyndall Air Force Base in Panama City, Florida.

“Receiving this award has been quite humbling and an extreme honor,” Kelly said. “I fully recognize that an award of this magnitude is not earned alone.”

Kelly credited “the great caliber of individuals I’ve had the privilege of leading over the years,” along with peers in the 128th Air Control Squadron and the Wisconsin Air National Guard, for the award. He also gave credit to his leadership.

“I’ve had great leadership and mentors over the years,” Kelly said. “I try to emulate many of those same leadership qualities. If you work hard, take care of the people you lead and serve, and just simply try to be a genuinely good person at the end of each day, then good things will come back to you in return.”

Lt. Col. Michael Western, Kelly’s commander at the 128th Air Control Squadron — which included a 2017 Middle East deployment — praised Kelly in a letter of recommendation for the award.

“He truly displays a passion for his craft and a desire to grow,” Western wrote. “He leads by example on every front and is an excellent resource for all Airmen. In a demanding deployed environment, he showed on numerous occasions his determination, pursuit of perfection and service before self when he put aside personal improvement goals for the betterment of the mission.”

The Theodore Roosevelt Leadership Award recognizes the achievements and dedicated service of Army and Air National Guard junior officers who have demonstrated outstanding leadership and professionalism in their service to country and community. Award criteria includes accomplishments in duty assignments, career progression, training and professional development activities, leadership and character in community service, education, and experience.

According to Western, Kelly was the unit’s youngest ranking instructor senior director, leading a 29-member deployed coalition team of air controllers in support of Operation Resolute Support. During the 2017 deployment, Kelly also served as the mission planning cell’s deputy chief, and earned 12 college credits and six graduate-level classes for a master’s degree in business management, strategy and leadership at Michigan State University. Kelly is a member of the Wisconsin National Guard Association board of directors, an Employer Support of the Guard and Reserve (ESGR) representative, a state enlisted development program instructor at Volk Field, and is a Junior Reserve Officer Training Corps volunteer.

Kelly’s award is an example of the caliber of men and women who proudly serve in the Wisconsin National Guard, an organization charged with a no-fail dual-mission as the state’s first military responder during emergencies, and as the primary combat reserve of the United States Army and Air Force.