Readiness on display during Hurricane Dorian 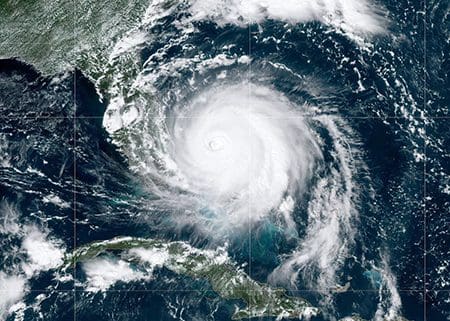 This Sept. 2, 2019 satellite image provided to the media by the National Oceanic and Atmospheric Administration shows Hurricane Dorian near the Florida coast. NOAA photo

MADISON, Wis. — As Hurricane Dorian barreled toward the Florida coast in early September, the Wisconsin National Guard stood ready to answer the call to assist civil authorities there in the aftermath of the storm’s expected devastation.

Fortunately, the storm changed course and largely spared Florida, though it wrought devastation in other areas. The storm originally appeared to be targeting Florida for a direct hit. The threat was so real that Florida began reaching out across the nation for help. The Wisconsin National Guard was ready to join National Guard units from multiple states to assist.

Late in the day Aug. 30, Wisconsin received an Emergency Management Assistance Compact request for a multi-functional battalion of 400 Soldiers to provide humanitarian assistance and security. Within hours, the entirety of the 132nd Brigade Support Battalion had been alerted and directed to report to their home armories in Janesville, Elkhorn, Mauston, Racine, Madison, Antigo, Mosinee, Waupaca, and Neillsville, along with personnel from the 115th Fighter Wing and Volk Field Combat Readiness Training Center to support the 132nd’s movement and provide unique Air National Guard capability.

All across the state, hundreds of Soldiers mobilized — foregoing Labor Day weekend barbecues, camping trips, and vacations to answer Florida’s call for assistance. By mid-morning Aug. 31 — with only hours’ notice — more than 450 Soldiers were standing ready at their armories to perform one of their core duties as Guard Soldiers and Airmen. They mustered Aug. 31 and planned to board aircraft bound for Florida Sept. 1 so they’d be in Florida in advance of Dorian making landfall, pre-staged and ready to begin assisting Floridians and the Florida National Guard — which had already mobilized in its entirety.

As the troops began receiving their mission, the call came from Florida to “stand down,” as Hurricane Dorian shifted and the outlook for the anticipated impact on Florida became more favorable. For Wisconsin National Guard members — many of whom mobilized just two years prior in September 2017 when Hurricane Irma set its sights on Florida — Hurricane Dorian was another example of the organization’s readiness for any mission, anytime, anywhere.

Capt. Calvin Hettwer, the commander of Company H, 132nd Brigade Support Battalion, said the state’s ability to mobilize Soldiers so quickly and its readiness for the mission — even in the midst of a holiday weekend — was nothing short of extraordinary.

“It was impressive. Not only was it a holiday weekend, but we had Soldiers at the armory in less than 24 hours,” he said during a question-and-answer session held by Maj. Gen. Don Dunbar, Wisconsin’s adjutant general, following the mobilization.” I would say even one hour after we started our alert roster, we probably had 75 percent of people notified and two hours later we had about 90 percent.”

Hettwer compared this mobilization with the Hurricane Irma mobilization in September 2017, when the entire 32nd “Red Arrow” Infantry Brigade Combat Team — more than 3,000 Soldiers — mobilized and ultimately more than 600 deployed to Florida to assist with traffic control, security, and humanitarian relief. He notes that the state’s response in the case of Hurricane Dorian, was measured and well-planned, even if its services weren’t ultimately needed.

Dunbar agreed and praised the men and women of the Wisconsin National Guard for their readiness to answer the call, even with little to no notice on a holiday weekend when many had already begun vacation plans.

“What our Soldiers do — and did in this particular matter in getting out the door quickly and responding — is unbelievable,” Dunbar said during the question-and-answer session. “It is an outstanding National Guard that we have and are privileged to work with, and I’m proud of them. I really am. I think this is the essence of the National Guard, and the response and the enthusiasm that comes from our traditional Soldiers and Airmen is extraordinary.”

The adjutant general addressed other questions during the question-and-answer session as well, ranging from how forces are resourced for these sorts of responses and how to give Soldiers and Airmen as much lead time as possible in advance of an emergency.

Dunbar explained that states in closer geographic proximity to Florida were understandably reluctant to commit their National Guard troops to Florida due to the uncertainty of the storm’s track and the increased likelihood that those forces could be needed to support citizens in their own states. He also noted that due to the unpredictability of hurricanes and the damage they cause, it is difficult to predict exactly what resources will be needed until a request actually arrives.

“On a bad night in America, the nation looks to our National Guard to be ready,” Dunbar said. “I’m confident that had Hurricane Dorian hit Florida with the same intensity it hit the Bahamas and other parts of the Atlantic, we were ready to assist Florida on what could have been a very bad night for our fellow citizens there.”

Responding to emergencies in Wisconsin or elsewhere in the United States is one of the National Guard’s core missions, and it must always remain ready to serve as the state’s first military responder when civil authorities need it. The National Guard simultaneously remains ready for its federal mission, where it serves as the primary combat reserve of the Army and Air Force.