Just a month after conducting a training mission on how to rescue an injured person at Devil’s Lake State Park in Baraboo, Wisconsin, the Wisconsin National Guard did the real thing Saturday, Sept. 28.

“It couldn’t have gone any better,” said Baraboo Fire Chief Kevin Stieve, who was on scene for Saturday’s rescue as well as the Aug. 29 rescue exercise. “It was very similar to the training.”

Stieve said a couple were hiking the rocky face of the east side of the lake when a large stone dislodged, pinning a female hiker’s leg against another large stone. The Baraboo Fire Department and Baraboo Emergency Medical Service arrived at the scene and were able to free the woman’s leg. While her leg was not broken, she was unable to walk. A decision was made to request air transport for the injured hiker.

“Carrying her out would have been dangerous,” Stieve said. “We had to stay with her for a while, but moving her would have taken just as long. That waiting helped keep our responders safe.” 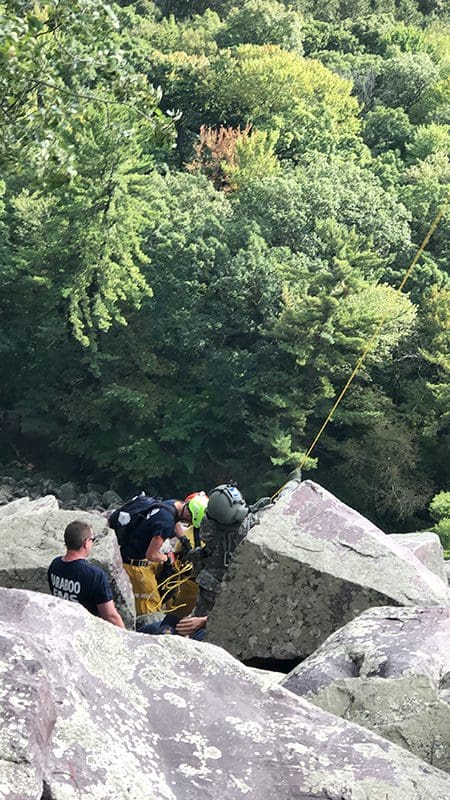 When the Air Coordination Group determines the Wisconsin National Guard is the best available resource, a legal review and approval from the adjutant general are required before authorizing the mission.

About an hour after the Baraboo Fire Department was dispatched to Devil’s Lake, the Army Aviation Support Facility #1 in West Bend, Wisconsin received the mission to hoist the injured hiker. By 3:05 p.m. the Black Hawk crew left West Bend, and arrived at Devil’s Lake by 3:39 p.m. The hiker was in the helicopter by 3:56 p.m.

“They were not on the scene very long at all,” Stieve said. “It was all very smooth and efficient.”

“Wisconsin has a robust hoist training,” Brandt explained. “We do this all the time.”

Brandt said the U.S. Army requires hoist training every 90 days, and that he has performed thousands of lifts and hundreds of live lifts dating back to 2003 when he was stationed at Fort Lewis, Washington.

But Brandt also said the weather conditions were perfect for Saturday’s mission, and communications between the responders on site was excellent. The Aug. 29 training helped as well.

“It’s a testament to the training,” Brandt said. “That was key.”

“The relationship built from the training was perfect,” he said. “I’m grateful to those who authorized the mission.”

Ironically, Brandt was not directly part of the training exercise, but happened to be vacationing at Devil’s Lake that day and was able to see it first-hand, if from a distance.

The Black Hawk crew brought the injured hiker to Stienke Basin at 4:08 p.m., and the aircraft returned to West Bend by 4:55 p.m.

“I was home for dinner,” Brandt quipped.

This real-world mission underscores the value of the Wisconsin National Guard, which serves the governor of Wisconsin as the state’s first military responder, as well as the nation’s primary combat reserve.