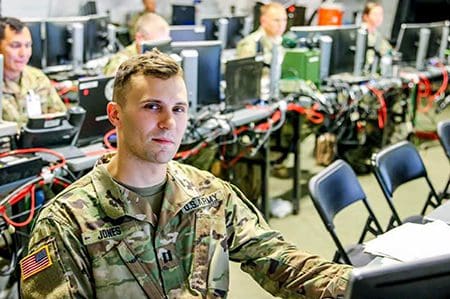 Warfighter is an advanced combat simulation, which tests the communications networks, warfighting capability and readiness of the units involved. It provides units and their staff the ability to exercise real-world decision making in a simulated combat environment.

The 10-day exercise enabled the 157th MEB to achieve some significant training goals, and 157th MEB commander Col. Matthew Beilfuss said the brigade took a different approach to this exercise.

“This time we brought out all of the infrastructure for the brigade headquarters, and we have had every one of our systems up and running, and fully tapped into the 101st Airborne’s digital architecture,” Beiluss said. “We call this an enhanced response cell. We are fully engaged and entrenched with the 101st digital infrastructure, passing out orders and instructions to our subordinates in a method that would be consistent with how it would work in reality.”

Beilfuss, who took command of the 157th MEB Aug. 2, has kept the Iron Brigade’s focus on staying ready for its federal mission as the nation’s primary combat reserve. 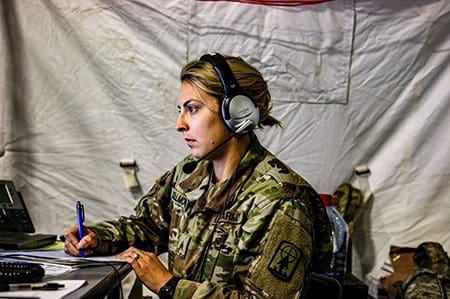 Headquartered in Milwaukee, the 157th MEB combat mission involves managing a designated territory to allow U.S. military units to maneuver effectively in a combat theater. To achieve this, the brigade can support combat units with a wide range of capabilities such as High Mobility Artillery Rocket Systems, combat engineers and specialized communications networking.

“We have a significant amount of the critical equipment that is necessary to provide security and support for the main warfighting effort,” said Command Sgt. Maj. Duane Weyer, 157th MEB senior enlisted leader. “As with any exercise, we train to identify our shortfalls and issues so that we don’t repeat them in a time of war.”

An exercise the magnitude of Warfighter brings its own challenges — and that’s the point.

“Our two biggest challenges are always communications and time,” Weyer said. “We have to maximize the amount of training we can get accomplished in that small training window. We’ve identified differences in our systems and differences in use of terms which we’ve been able to iron out through the training.”

“It is hard to just do a communications exercise and know that you are doing all of the right things and providing the right kind of stress on the system and incorporating all of the right factors into your plan,” Kohlstedt said. “When we go to a Warfighter, we have real customers — we are integrating with a real higher headquarters and encountering real issues, which allows us to exercise the troubleshooting process, understand what it means to support 24 hour operations, man the help desk to be reactive to our customer’s needs, while also maintaining our other initiatives that we might have ongoing.

“It throws all of the real-world glitches into the planning process to allow you to get that resiliency,” Kohlstedt continued, “and to make sure that you are really are testing your systems to the point where you know that you can perform appropriately when the time arises.”

In spite of prior collaborations with the 101st Airborne, embedding with an active Army division still provides a unique training experience for Wisconsin National Guard Soldiers.

“It’s interesting to get that division-level perspective, because we don’t really get that in the Guard,” said 2nd Lt. Ashley Braun of Milwaukee, a strength management officer for the 157th. “I’d say the most beneficial part is being able to work with my team in a field environment and getting to do the things that we don’t always get to do at drill. We’re doing a lot to develop our tactical procedures, and to develop our plan as a staff so that we can be ready for anything.”

Planning for the Warfighter takes many months, and the 157th maintains quarterly training requirements in order to ensure they are prepared for the exercise. Sgt. 1st Class Jacob Stangel of Two Rivers, Wisconsin, operations noncommissioned officer for the 157th MEB, attended a planning working group with the 101st in February to get ready for the exercise.

“This is a very good experience for understanding the full aspect of what a MEB does and what their particular job is,” Stangel said. “It keeps us in the game, keeps us focused, and makes us aware of the areas that we may need to tweak and work on before we get to the Warfighter.”

The digital battlefield and cyber warfare today has changed quite a bit from the analog ways of yesteryear, and the 157th is training to meet any potential threat with the latest in communications technology.

“It brings a lot of ease and quality of life to the operation,” said Cpl. Ian Waterbury of Stevens Point, Wisconsin, a network operations IT specialist for the 157th MEB. “Instead of having paper and analog objects and products, you now have digital, which can be transmitted more thoroughly throughout the units.”

This exercise marks the young corporal’s fourth Warfighter, making his experience level senior to many whom have never been to one. The simulation grants younger enlisted Soldiers a unique and career-enhancing opportunity to be able to work with many senior enlisted and officers at a strategic level. Another example of this is Spc. Jade Goehl of Fort Atkinson, Wisconsin, an air defense battle management systems operator for the 157th MEB.

“My role during the exercise primarily is helping to clear airspace for fire missions,” Goehl explained. “I also collect intelligence information on different flight patterns for our enemy aircraft. I’m trying to figure out where they’re originating, and sharing that with our intelligence section.

“Warfighters are really the only time that I can practice my skill,” Goehl continued. “It is a perishable skill. Many different systems need to tie together. This helps me stay current.”

“They’ve done nothing but try to help us get our systems up,” Beilfuss said. “The fact that we have every single one of our corps systems up is a testament to them and our signal folks at the 357th Brigade Signal Company as well.”

“As a whole team, I’m just very proud of each and every one of our Soldiers.”