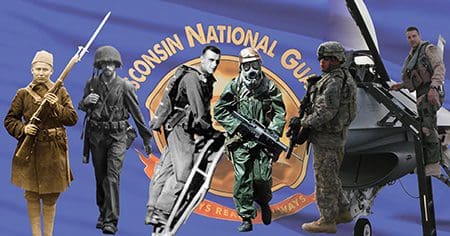 MADISON, Wis. — Nearly 1,200 Wisconsin National Guard Soldiers and Airmen will commemorate the 100th anniversary of a national day of remembrance while deployed worldwide in support of the U.S. military.

These Guardsmen follow in the footsteps of Wisconsin National Guard World War I Soldiers who, on Nov. 11, 1919, marked the first anniversary of Armistice Day — a day now celebrated as Veterans Day.

The guns of World War I fell silent 11 a.m. on Nov. 11, 1918 when an armistice ended more than four years of war. A year later, most of the four million American Soldiers, Sailors and Marines who served in the war had returned home. An urge to observe the first anniversary of the war’s end and honor those who had served grew throughout the country.

President Woodrow Wilson signed a proclamation on Nov. 11, 1919 that commemorated the end of the Great War. Parades, public gatherings and pausing for a few moments at 11 a.m. would mark the day.

“The reflection of Armistice Day will be filled with solemn pride in the heroism of those who died in the country’s service and with gratitude for the victory both because of the thing from which it has freed us and because of the opportunity it has given America to show her sympathy with peace and justice in the councils of nations,” Wilson’s proclamation stated.

Wisconsin Gov. Emanuel L. Philipp proclaimed Nov. 11, 1919 as Armistice Day throughout the state and recommended “that a brief portion of the day be devoted to patriotic exercise.”

In Milwaukee, Mayor Daniel Hoan called “upon our citizens to display the flag from their residences and likewise from factories, stores and places of business.” Municipal buildings and banks closed at noon. City sirens and factory whistles sounded at 11 a.m. so people could pause “to bow their heads in thanksgiving for the gift of peace.” Thousands watched a downtown parade and the World War I veterans of the Wisconsin National Guard’s 120th Field Artillery were honored at an evening commemoration event held at the city’s auditorium. The 120th had served in the war with the 32nd “Red Arrow” Division, which had been formed for World War I with 15,000 Wisconsin National Guard Soldiers and another 8,000 from Michigan.

Red Arrow veterans elsewhere marked Armistice Day in a variety of ways. Those in Oshkosh joined with veterans from the other armed services to march in an 11 a.m. parade through downtown. Less formal was a football game in Racine between 32nd Division veterans and the Horlick-Racines — the city’s club team. The Red Arrows prevailed 13-6 in a hard-fought contest. That evening, veterans of Sheboygan’s Company C, 127th Infantry held an Armistice Day ball attended by hundreds.

Armistice Day was not an official annual day of recognition in Wisconsin until 1929 when the Wisconsin Legislature enacted a law requiring that “the governor shall annually issue a proclamation calling attention to the fact that the eleventh day of November is the anniversary of Armistice Day, and requesting the people throughout the state to observe by appropriate exercises the hour at which the armistice was concluded.”

Congress in 1938 made Armistice Day a legal holiday and it remained a day to recognize the service of World War I veterans. Congress expanded the day in 1954 to honor the more than 21 million Americans who had served in World War II and the Korean War. President Dwight Eisenhower, in his 1954 Veterans Day Proclamation, called upon all Americans to observe Nov. 11 as Veterans Day to honor all American veterans of all wars.

“On this day let us solemnly remember the sacrifices of all those who fought so valiantly on the seas, in the air and on foreign shores, to preserve our heritage of freedom,” Eisenhower said, “and let us reconsecrate ourselves to the task of promoting an enduring peace so that their efforts shall not have been in vain.”

The Wisconsin National Guard continues to maintain a high operations tempo to this day with more than 1,200 Soldiers and Airmen deployed overseas. Red Arrow Soldiers of the 1st Battalion, 128th Infantry and 2nd Battalion, 127th Infantry are currently deployed to Afghanistan along with more than 250 Airmen from the Wisconsin Air National Guard’s 115th Fighter Wing. The 32nd Infantry Brigade Combat Team headquarters along with approximately 160 Soldiers also deployed to Ukraine this fall where it will oversee a group of multinational “partner and advise training teams” – or PATTs – based at the International Peacekeeping and Security Center in western Ukraine.

Veterans Day weekend also closes the public screenings of the Wisconsin National Guard’s Dawn of the Red Arrow documentary. The film commemorates the World War I service of the 15,000 Wisconsin National Guard Soldiers who served in 32nd “Red Arrow” Division. The film has screened in nine cities throughout the state and three showings remain: Nov. 9 (10 a.m) at the Millennium Cinema in Platteville, Nov. 10 (noon) at the Rivoli Theater in Cedarburg and Nov. 12 (7 p.m.) at the UW-Madison’s Union South. More information is available at www.dawnoftheredarrow.com. Admission to all screenings is free.