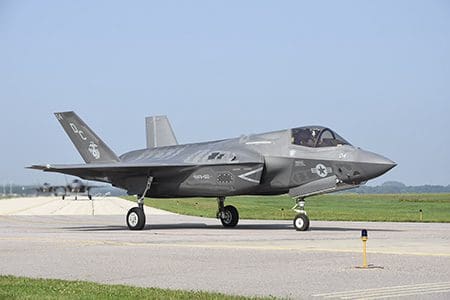 On Nov. 1, the public comment period closed on the draft Environmental Impact Statement (EIS), which sought the public’s input on the U.S. Air Force’s selection of the 115th Fighter Wing at Truax Field in Madison as its preferred site to host the F-35 Lightning II.

The 115th Fighter Wing and the Wisconsin National Guard were grateful for the engagement from the community and elected officials throughout the process. The unit now looks forward to a final Record of Decision from the U.S. Air Force in the spring of 2020.

“Thank you to the members of the community, local, and regional leaders for participating in the EIS and NEPA (National Environmental Policy Act) process in regards to the selection of Truax Field as the proposed alternative for basing the next operational squadron of F-35As” said Col. Erik Peterson, 115th Fighter Wing commander. “We are grateful for the tremendous amount of public involvement and support for the 115th Fighter Wing, our mission, and our Airmen. We truly value the feedback and input shared by all members of the community as well as our local, state, and federal elected officials.

“All of the comments, both oral and written, attendance at the public hearing, and vocal expression of thoughts and opinions are extremely valuable to the EIS process,” Peterson continued. “We greatly appreciated the dialogue with the public, and respect the views expressed from throughout the community, in which members of our Wing reside. We’re proud to call Madison home, and the hundreds of Airmen who live here, raise our families here, work here, and go to school here are proud to be your neighbors.”

The EIS is governed by NEPA, and it is a specific, established, and deliberate process followed nationwide by the federal government to assess the feasibility of certain actions.

The 115th Fighter Wing plays a vital role in both the nation’s defense and serving the citizens of Wisconsin by supporting civil authorities during emergencies. Without the support of elected leaders and the community, the 115th’s mission would not be successful, Peterson said. The Wing looks forward to continuing to serve the nation and the state of Wisconsin for decades to come.

If the U.S. Air Force accepts the recommendation for Truax to host the F-35, aircraft would begin to arrive at Dane County Regional Airport in 2024.

For more information on the 115th Fighter Wing, its mission, economic impact, the long history of Truax Field, and its role in the Madison community, visit our website.