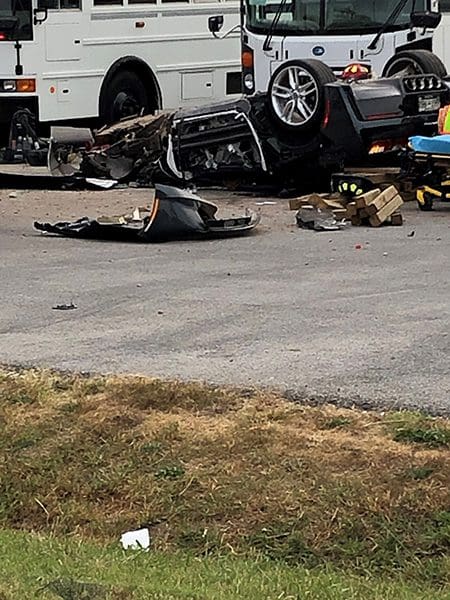 Full StoryFORT CAMPBELL, Ky. — A Wisconsin National Guard Soldier came to the rescue of another service member after responding to a vehicle rollover at Fort Campbell earlier this fall.

As he got into his vehicle, he looked up and saw a Corvette coming down the road into a parking lot. The vehicle hit a culvert, flipped over, and skidded about 250 feet, Komorowski said.

“I just ran over, and I yelled to some other people that were walking down the sidewalk on the other side of the street, ‘call 9-1-1,’ because I just dropped my phone and ran over to him, went on the driver’s side of the vehicle because it was flipped over, where the driver was, and just started responding to him,” Komorowski said.

Another Soldier, a medic with the 101st Sustainment Brigade, also witnessed the accident and joined Komorowski in responding to the scene. Together, they made sure the service member – who was still trapped in the flipped vehicle – was alright and didn’t go into shock.

Once other first responders arrived on the scene, it was a team effort that took approximately 30 minutes to extricate the service member from the vehicle. The service member was air evacuated to Nashville for medical care, and has since been released and is recovering.

Komorowski said he has responded to other accidents in the past, but nothing like this. To him, it’s common sense to respond to an accident and take action.

“That’s what I would do,” Komorowski said. “Any Soldier, I think, would do that.”

That sort of mentality is exactly the mindset expected of Soldiers and Airmen who serve in the Wisconsin National Guard – an organization that must remain always ready and always there to fulfill its dual mission as the state’s first military responder during emergencies while simultaneously remaining ready to fulfill its federal mission as the primary combat reserve of the Army and Air Force.

Komorowski added that the training he received in more than 30 years of service, including combat lifesaver courses, assisted in his knowledge on how to respond and help the trapped service member.

Col. Stephanie Barton, the commander of the 101st Airborne Division (Air Assault) Sustainment Brigade, presented Komorowski with the Army Commendation Medal during a during the Warfighter exercise at Fort Campbell.

“From my perspective, MSG Michael Komorowski is extremely humble, incredibly brave and a perfect example of why our non-commissioned officers lead the way and are the back bone to all we do,” Barton said.