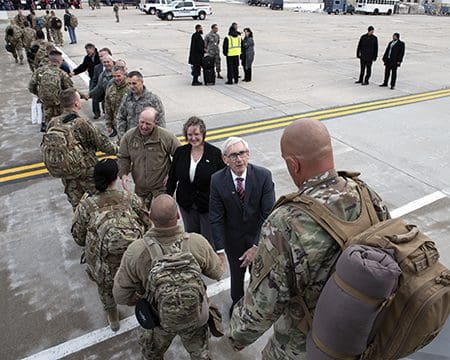 MADISON, Wis. — More than 200 Airmen assigned to the 115th Fighter Wing and the 378th Fighter Squadron were welcomed home from Bagram Airfield, Afghanistan during a return ceremony at Truax Field Nov. 9.

The Airmen were integral in supporting Operation Freedom Sentinel and NATO’s Resolute Support during their four-month tour.

“Airmen of the 176th Expeditionary Fighter Squadron, from the moment you arrived at Bagram Air Base, your outstanding performance, attitude and effort resulted in immediate positive impacts,” said Col. Erik Peterson, 115th Fighter Wing commander. “You executed 100 percent of your air tasking order missions. Our maintenance team performed their role flawlessly as a sortie generation powerhouse, while our pilots’ skilled performance under the most demanding situations provided strategic impact to the furthering of United States objectives in Northern Afghanistan.”

Peterson received a personal note from Brig. Gen. R. Scott Jobe, the 455th Air Expeditionary Wing commander, regarding the Airmen while they were deployed

“The dedication of your Airmen in the fighter squadron to the flight line is truly inspiring,” Jobe said. “I witnessed attention to detail, devotion to duty, and exquisite discipline in all things. Your team taught me the latest and greatest in tactics. I know what right looks like, and the leadership of that team is right. The 176th EFS is the finest F-16 unit I have encountered.” 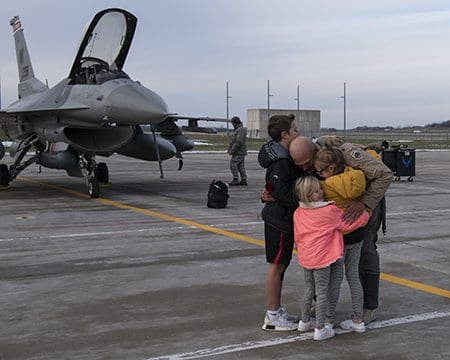 In addition to Jobe’s words, Peterson indicated others took notice of the unit’s overseas performance.

“He finished his letter to the chief, and I quote, ‘The 176th EFS represented our nation and service with honor and the highest professionalism,” Peterson said.

During Peterson’s speech, he also gave a shout-out to the families and friends of those deployed for their continuous and unwavering support.

“When your loved one is deployed, they often miss day-to-day life events, birthdays, anniversaries, parties and celebrations,” he said. “I want you to know that the 115th Fighter Wing and the state of Wisconsin are grateful that these brave men and women have answered our nation’s call to help defend freedom and are trained to be the best our total force has to offer to our community, state and nation.”

Lt. Col. Benjamin Gerds, who led the 176th Expeditionary Fighter Squadron during the deployment, shed a little light on his unit’s exploits.

“We were getting direct feedback that we were stopping Afghan National Army command outposts from getting overrun by Taliban,” Gerds said. “We really felt like we made a huge difference over there.”

Gerds also said that the squadron’s experience working alongside the 378th Fighter Squadron — an active-duty Air Force F-16 unit stationed at Truax Field — helped his unit seamlessly integrate with the 455th in Afghanistan.

“The degree of difficulty in this mission that you have accomplished was very high — the margin for error very low,” Dunbar said. “And you did it every day, day in and day out. And men and women that you have never met are saying prayers for your efforts tonight, and will for a long time to come. It is not an easy task to wear a uniform for our country. It’s an even more difficult task to perform at the level that you have performed for these last four months.”

“Whether in Wisconsin, somewhere within the United States, or halfway across the world in Afghanistan,” Peterson said. “I know that you can count on the Airmen of the 115th Fighter Wing to do an outstanding job and continue to show the world that we are a premier fighter wing with outstanding Airmen who are trained, ready and dedicated.”

Dunbar said the quality of the 115th Fighter Wing was a prominent factor in the Air Force selecting the unit as a preferred candidate for the F-35 Lightning fighter jet.

“And with your support, we’re going to take that aircraft and continue to do this mission for the United States Air Force for generations to come,” Dunbar said.

Evers thanked the returning Airmen for displaying selflessness, hard work and dedication during their deployment.

“Your service to the state and the nation makes us Wisconsin proud,” Evers said. “Thank you for your service and sacrifices to ensure freedom and making sure we protect our way of life. Welcome home.”