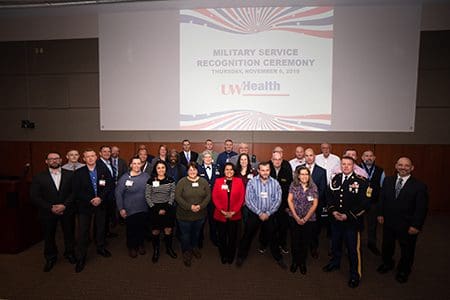 Veterans from the Wisconsin National Guard shared a message of appreciation for veterans at Veterans Day ceremonies and commemorations around the state. Submitted photo

Wisconsin National Guard service members shared a message of appreciation for veterans and their service to our nation during Veterans Day observances across the state.

The Soldiers and Airmen also shared their own unique stories of serving in the Wisconsin National Guard with community members and fellow veterans.

More than 50 Wisconsin guardsmen spoke at schools, community organizations, and citywide events observing Veterans Day as part of a community engagement initiative targeted at educating the public on the National Guard’s unique state and federal mission and building support for those who serve today and throughout our nation’s history. The Wisconsin National Guard’s federal mission is to act as the primary combat reserve of the Army and Air Force, its domestic mission is to support civil authorities here at home.

The Wisconsin National Guard has nearly 10,000 Army and Air service members serving in nearly 70 communities across the state. The majority of them hold a civilian job full-time or attend school while serving part-time as a National Guard member. 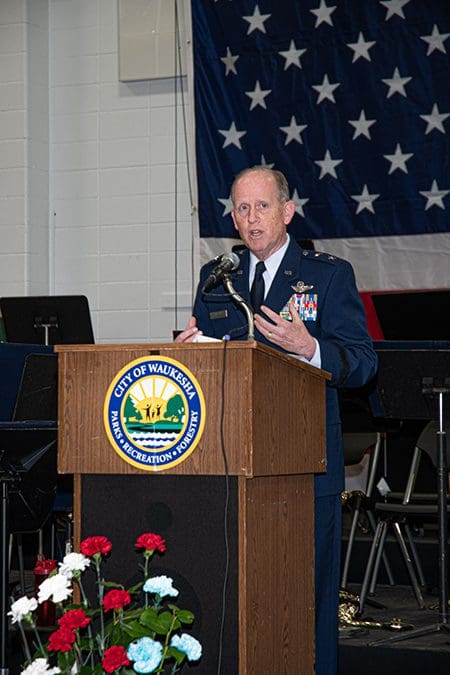 Maj. William Civiletta-Kalich, works full-time as a civilian Senior Physician Assistant at the Surgical Oncology Cancer Treatment Centers of America. Additionally, as a traditional guardsman he serves part-time with the Wisconsin Air National Guard as a triage officer, assigned to the Chemical, Biological, Radiological, Nuclear, and Explosive (CBRNE) Enhanced Response Force Package. He recently spoke about his personal military experiences to a group of medical professionals at the UW – School of Medicine and Public Health’s annual Veterans Day recognition event.

“We veterans and service people are our own best ambassadors and advocates,” said Civiletta-Kalich. “With the relatively small percentage of Americans that join the military in this modern era, it’s up to us to communicate the need for support and recognition from the communities we serve. Only in that way will the population at large understand their crucial role in our nation’s defense.”

Beth Pinkerton, a UW – Health employee, attended the event along with approximately 150 others.

“He gave a very personal message that reflected on what it’s like to be in the service and part of a community,” said Pinkerton. “As someone without an immediate family member in the service, I found it very inspiring to learn about the ethics and how his military experiences and values tie into civilian life.”

“To those veterans that went before us, I offer you a humble thank you from the bottom of my heart,” said Dunbar. “We stand on the shoulders of giants, and we all owe you our undying respect for all you sacrificed on behalf of the United States of America.”

“Maj. Gen. Dunbar’s comments were awe-inspiring and the audience was very appreciative of his attendance,” said JoAnna Adamicki, the WPRF Special Events Coordinator. “The standing ovation he received before he spoke was a key indicator of the respect they had for him. The major general’s speech painted a vivid picture of what our world would look like, throughout history, without our veterans. The general’s words made it loud and clear, that every veteran is appreciated. His words will not soon be forgotten by all in attendance.”

“World War I and the 32nd “Red Arrow” Division are the origin of the modern Wisconsin National Guard and its dual missions here at home and abroad,” said Maj. Brian Faltinson, the film’s project officer. “Those Soldiers set the standard for our organization today and their service would not have been possible without the support of all of Wisconsin’s communities.”

The Wisconsin National Guard continues to maintain a high operations tempo to this day with more than 1,200 Soldiers and Airmen deployed overseas. Red Arrow Soldiers of the 1st Battalion, 128th Infantry and 2nd Battalion, 127th Infantry are currently deployed to Afghanistan. Nearly 250 Airmen from the 115th Fighter Wing returned from Afghanistan earlier this week, and the 32nd Infantry Brigade Combat Team headquarters along with approximately 160 Soldiers also deployed to Ukraine this fall where it will oversee a group of multinational “partner and advise training teams” – or PATTs – based at the International Peacekeeping and Security Center in western Ukraine.