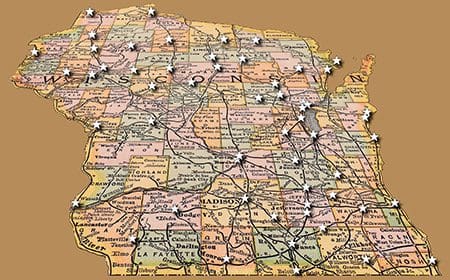 MADISON, Wis. — The National Guard celebrates its 383rd birthday today as a vibrant organization of Citizen-Soldiers who shoulder dual missions as the combat reserve to the U.S. Army and Air Force and as the first military responder at home in times of local and state emergency.

The General Court of the Massachusetts Bay Colony on Dec. 13, 1636 formed militia units from all able-bodied men in order to conduct their own defense in a new world 3,000 miles from the protection of England. Today, the Massachusetts National Guard carries the lineage of these earliest units. Wisconsin’s origin in the National Guard dates to 1837 when the Green Bay Rangers became the Wisconsin Territorial Militia’s first unit.

As the National Guard marked its birthday a century ago, the nation’s oldest military branch proudly touted its World War I record. The National Guard provided 18 divisions to the war effort with many of those organizations — such as Wisconsin and Michigan’s 32nd “Red Arrow” Division — emerging as some of the Army’s top fighting units. However, the Army in 1919 had disbanded all of these divisions and discharged most of their Soldiers. The Guard’s future role in the nation’s defense was uncertain.

A fierce debate in 1919 raged in Washington, D.C. about the National Guard’s role in national defense. Initial plans called for a large standing army augmented by a vast pool of citizens trained under the concept of universal military training. The plan made no mention of the National Guard. Competing plans emphasized a federal reserve instead of a state-controlled National Guard. Meanwhile, the states lacked clarity on how to reorganize their National Guard.

Wisconsin did not wait for events in Washington and took proactive steps in 1919 to rebuild a force capable of responding to emergencies at home and augmenting the U.S. Army. 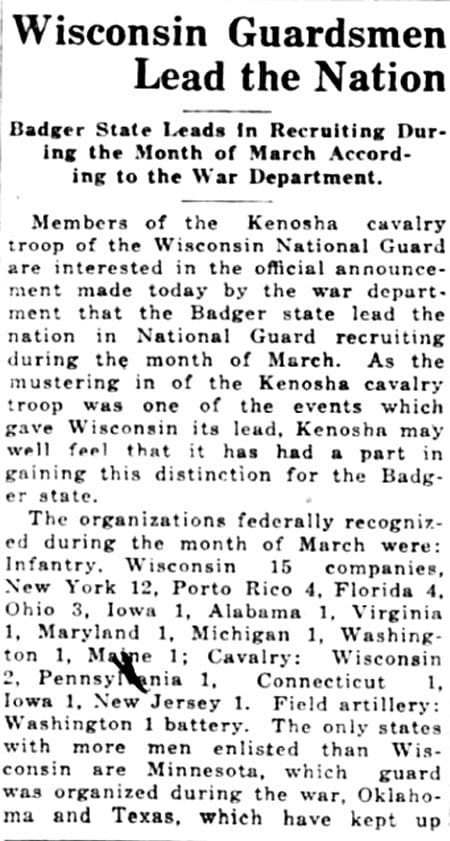 “A re-organized Wisconsin National Guard, maintained at the strength required by Federal statute is the State’s appointed part in the military preparation in peace time which has been decreed as essential for national safety,” said Holway in an Aug. 7, 1919 message published in newspapers statewide.

“The Guard is an organization to bring as near as may be, to the home of every young American, the opportunity to gain that military training which will make him a competent Soldier in his country’s defense,” Holway added.

By October, Milwaukee’s Troop A, First Wisconsin Cavalry had organized as the Wisconsin National Guard’s first post-World War I unit. Tomah followed on Dec. 15 when it mustered a company of infantry. The Tomah unit was the first to meet the War Department’s standard of troop strength and equipment.

Other communities across the state initiated recruiting drives for their emerging units.

“We are going to keep Company C in Sheboygan,” said Capt. Eitel Meyer in a Feb. 10, 1920 edition of the Sheboygan Press. “It is certain that Company C will be reorganized and perpetuated in military annals as one of the best organizations the Wisconsin National Guard has ever turned out.” Meyer was Company C’s first sergeant during the war.

Wisconsin had formed 43 units before Congress in June finally clarified the Guard’s role when it passed the National Defense Act of 1920. The act solidified the National Guard as the Army’s primary combat reserve — a role it maintains to this day.

It would take a few more years for Wisconsin to finishing reorganizing its National Guard. But Wisconsin’s communities in a single year had established a strong foundation for the Wisconsin National Guard to build a century of service to state and nation.