Contracting team deploying to Horn of Africa this winter 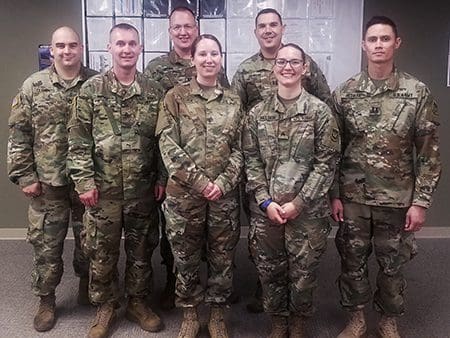 Soldiers from the Wisconsin Army National Guard’s 1967th Contingency Contracting Team during an exercise at the Defense Supply Center in Columbus, Ohio, in August. The 1967th is slated to deploy to the Horn of Africa this winter. Submitted photo

The Wisconsin Army National Guard’s 1967th Contingency Contracting Team is slated to deploy to the Horn of Africa this winter, where it will provide contracting support services to U.S. forces in the region.

Made up of approximately five Soldiers, the Camp Douglas-based unit will conduct pre-mobilization training at Fort Bliss, Texas, prior to deploying overseas.

The Wisconsin National Guard is planning a sendoff ceremony for the 1967th Contingency Contracting Team and will release those details at a later date.

Contracting can be a complicated, but critical, mission in the military. In preparation for its upcoming deployment, the unit completed multiple training events including Contingency Contracting Administrative Services training in November at Army Contracting Command in Huntsville, Alabama, and a scenario-based evaluation during the unit’s annual training period last summer. The course the unit completed in Huntsville developed the unit’s knowledge of large base support contracts like those the 1967th could handle overseas.

During the unit’s annual training period Aug. 5-15 at the Defense Supply Center in Columbus, Ohio, the 1967th and the Ohio National Guard’s 1937th Contract Team experienced the result of a year’s worth of collaboration. Team commanders Maj. Bradley Wahl from Ohio and Capt. Gary Brown from Wisconsin met at the 2018 Army National Guard and Reserve Acquisition Summit, and discussed how their teams could work together using a valuable — if somewhat unfamiliar — software training program, the Unit Contingency Contracting Exercise (UCCE) Tool.

“We thought we could combine our efforts and learn from each other,” Wahl said. “The Ohio team was fortunate enough to use this software at our external evaluation last year — I thought this software would be better for us to try this year in the Guard.”

Brown wanted the training to shift focus from stateside contracting to contingency operations.

“We, as a team, are very lucky to have skilled and experienced contracting officers,” Brown said. “This training allowed us to harness that knowledge and refocus it into a contingency environment.”

In order for the exercise to provide realistic challenges, Wahl and Brown enlisted support from multiple components — the Army Contracting Command, the Army Mission and Installation Contracting Command (MICC), the Army Acquisition Center of Excellence (AACoE) and the National Guard Bureau.

This was the first such exercise to include the AACoE and the MICC.

“[MICC] support was critical,” Wahl said. “They were instrumental in aligning the required evaluation tasks with the scenarios.”

“Col. Caldwell really helped get the MICC and AACoE on board with the training,” Brown said.

AACoE instructors conducted a contracting refresher course and review of the Defense Contingency Contracting Handbook during the first week of the exercise. This prepared the two teams for the external evaluation during the second week, at the U.S. Army Reserve Center.

The evaluation was based on a notional natural disaster scenario in the Caribbean. The two five-person teams responded to numerous problems and challenges over the course of three days, providing real-world insight into conducting acquisition missions in a humanitarian environment.

“I wanted something more than a few scenarios,” Brown said. “I wanted the team to be tested and overloaded with work — stressed a little bit.”

“I thought this training exercise was valuable,” Stowe said. “With [Wisconsin and Ohio] taking a lead on this specific training exercise, it’s given us hope that this is something we can definitely implement across the entire enterprise.”

The external evaluation Brown and Wahl implemented was determined an overall success.

“Everyone took all aspects of the training seriously and enjoyed it,” Brown said.

“I’m excited to make it even better in the future,” Wahl added.

Stowe thanked the Wisconsin and Ohio National Guard contract teams for their efforts.

“For being visionaries as well as coordinating all the efforts,” Stowe said, “because it does take a lot to put something like this together.”

The 1967th will now take those lessons learned and apply them in a real-world contingency environment in the Horn of Africa, where it will help execute contracts and acquisitions critical to U.S. efforts in the region.

The Wisconsin National Guard continues to maintain a high operations tempo with hundreds of Soldiers and Airmen deployed overseas including nearly 400 Red Arrow Soldiers of the 1st Battalion, 128th Infantry currently serving in Afghanistan, and approximately 160 Red Arrow Soldiers from the 32nd Infantry Brigade Combat Team headquarters who deployed to Ukraine earlier this fall where they are overseeing a group of multinational “partner and advise training teams” — or PATTs — based at the International Peacekeeping and Security Center in western Ukraine. In addition, approximately 150 Soldiers from the 829th Engineer Company mobilized for deployment to the Middle East earlier this fall.