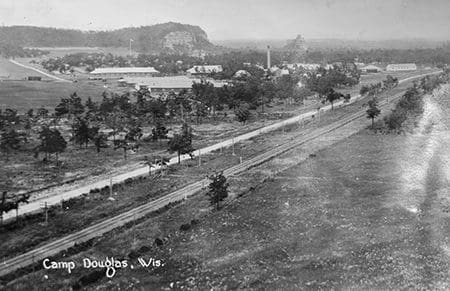 With a towering stone bluff (back) providing an ideal backstop for a rifle range, brick warehouse buildings housing large stores of equipment and a major rail line providing for transportation, the Wisconsin Military Reservation was an ideal place for Wisconsin National Guard units to muster before deploying to Texas in 1916 and 1917 (Camp Douglas Photograph Collection, Wisconsin Veterans Museum).

As 2019 draws to a close, so too does Volk Field Combat Readiness Training Center’s (CRTC) commemoration of its 65th year as an air base. But Volk Field, and the military reservation that surrounds it dates back to 1888 when the Wisconsin National Guard first took ownership of the land that today houses one of the premier training facilities in America.

Today, cars and trucks whiz by the beautiful towering stone bluffs and an orderly, if not quiet, assortment of military buildings near the Camp Douglas I-94 freeway exit. But Volk Field has emerged in recent years as one of the finest training environments in the nation. It now annually hosts multiple major exercises including the twice annual Northern Lightning exercises which tests the limits of even the most advanced aircraft in the world. It became an air base in 1954 when the Air National Guard and the U.S. Air Force was in its infancy. 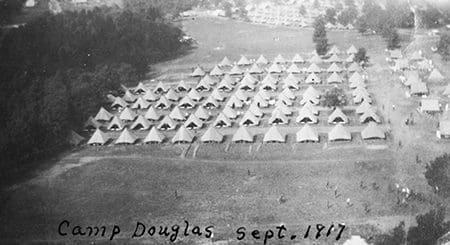 Lines of tents housed members of the Wisconsin National Guard in September 1917 at the Wisconsin Military Reservation at Camp Douglas while they prepared for service in World War I (Lee Lynch Collection, Wisconsin Veterans Museum).

But what today is known as Volk Field, has a long history as a major training area. Some 100 years ago, thousands of Wisconsin National Guard Soldiers gathered here in the first step of a long journey that would eventually find them in France for service in World War I as the 32nd “Red Arrow” Division.

Then known as the Wisconsin Military Reservation at Camp Douglas, the camp served as the gathering point for Wisconsin National Guard Soldiers who would deploy in 1916 for the Mexican Border Crisis and again in 1917 for service in World War I. 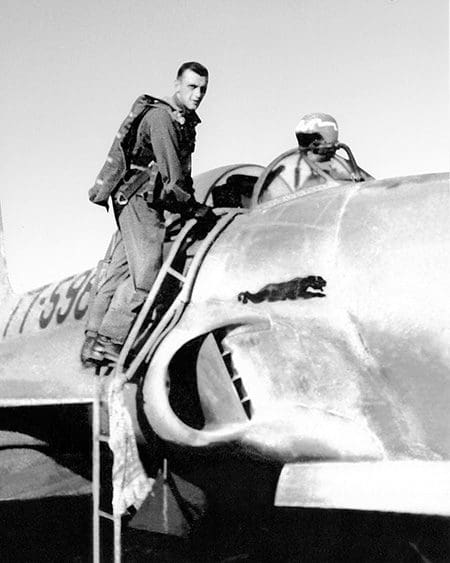 The camp began in 1888 when the Wisconsin National Guard purchased 440 acres near the small village of Camp Douglas in western Juneau County for purposes of setting up a rifle range and annual encampment site. The towering stone bluffs provided an excellent backdrop for a rifle range and the adjacent railroad facilitated easy transportation from home armories. The Guard utilized the site for rifle training in September 1888 and the Wisconsin legislature authorized in 1889 the governor to acquire additional land “. . . at or near Camp Douglas, in Juneau County, as a permanent campground and rifle range for the Wisconsin National Guard.”

The first annual encampment occurred in June 1889 when the 3rd Wisconsin Infantry arrived for six days of training. Official reports of the event stated that Soldiers had to march from the train to camp carrying “. . . a knapsack, haversack, canteen and a .45 caliber rifle, the combined weight causing the soldier to sink ankle deep in the sand” that covered the land between the railroad station and the camp. Soldiers slept in tents and used primitive wood-frame kitchens and latrines. There was no water system, baths, sewerage systems or roads. 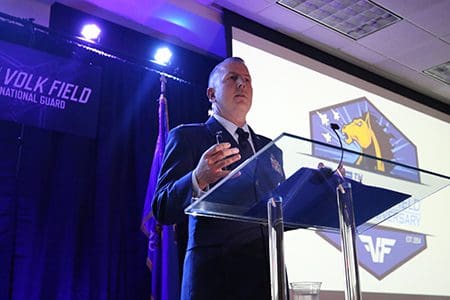 Col. David May, the commander of Volk Field Combat Readiness Training Center speaks during a 65th anniversary celebration at Volk Field Oct. 5, 2019. The base commemorated 65 years as a Wisconsin Air National Guard base in 2019. Wisconsin National Guard photo by Staff Sgt. Kimberly Moll.

Units returned year after year for annual training where they practiced rifle marksmanship and small unit battle drills, as well as the essential skills of soldiering. By 1916, the reservation could easily handle housing and training several thousand soldiers at a time. As a result, the post was the natural gathering point for Wisconsin Soldiers in the summer of 1916 when President Woodrow Wilson mobilized the Guard as part of the nation’s response to the Mexican Border Crisis. Soldiers spent a few weeks at the facility receiving equipment and training before traveling to Camp Wilson near San Antonio, Texas. These Soldiers had all returned to Wisconsin by spring of 1917 and many would be called upon again a few months later as the U.S. was drawn into the First World War in Europe.

After the U.S. entered the war in April, the ranks of the Wisconsin National Guard swelled by several thousand. Recruits flocked to existing units and patriotic citizens organized new units in those cities previously without. All of these new Soldiers started their military training at the Wisconsin Military Reservation before traveling to Camp MacArthur, Texas. Pvt. Richard Tully joined the Wisconsin National Guard one week after war was declared and spent nearly two months at the reservation learning the basics of soldiering:

“They put us through about six hours of drill each day and it takes another three hours to eat our meals and clean our camp, and the rest of the time there is always something to do, such as wash clothes, so we do not get much time to ourselves until after supper,” Tully wrote in 1917. “Every morning we take a hike of three or four miles before drill and I am beginning to find out that I have two legs which I did not hardly know I had!”

Tully and thousands of other Wisconsin National Guard members would also be inducted into federal service inside the officer’s clubhouse, which is one of the post’s oldest remaining buildings. Once in Texas, these Soldiers joined Soldiers from the Michigan National Guard to form the 32nd Division.

Jerome Volk deployed to the Korean War in 1951 where his F-80 Shooting Star was shot down during a combat sortie against communist forces Nov. 7, 1951. His remains were never recovered.

Today, the Camp Williams-Volk CRTC maintains an important role in preparing the Wisconsin National Guard for missions both at home and abroad. The base is the site of several national-level training exercises for both domestic emergency responses and federal combat missions, and thousands of Wisconsin National Guard soldiers since 2001 have embarked for and returned from service in support of operations in Iraq and Afghanistan.

Most fittingly, Camp Williams remains the headquarters of the 32nd “Red Arrow” Infantry Brigade Combat Team, the unit that carries forward the proud history of those thousands of Wisconsin National Guardsmen who departed from Camp Williams 100 years ago and began the legacy of the 32nd Division.

This fall, Volk CRTC commemorated the 65th anniversary of its conversion to a primarily Wisconsin Air National Guard facility. The base’s modern hotel and conference center were decorated with vestiges and artifacts of the base’s early history loaned by the Wisconsin National Guard Museum, and members of Jerome Volk’s family were in attendance to mark the occasion.

“Having the opportunity to attend the 65th anniversary celebration of Volk Field was truly a moving and inspiring experience for my sister and I, and our families,” said Jeri Volk Barry, the late Jerome Volk’s niece. “To see the history that has taken place and how Volk Field has grown to become what it is today is incredible. We loved seeing the fabulous video showing the parades that took place decades ago as well as the exciting and impressive events surrounding Northern Lightning this past year. To see the flight suit my uncle would have worn on his last flight and other personal items of his displayed was very moving, and we appreciated the effort that went into making that happen.

“That said, the best part of being at Volk Field anytime is to be able to see first-hand the heroes that make up the Volk Field family and their commitment and service to our country,” she added. “I always leave a visit to Volk Field with a heart full of gratitude and inspiration knowing what it means to those who work day in and day out to make Volk Field what it is today. My father and grandparents would be proud and grateful, as well as overwhelmed with what has transpired over the past 65 years. I just wish they were here to see it all in person.”

Volk Field has long been tied to Jerome Volk’s legacy of service and sacrifice, and while the base will always honor its past and remember what it took to build it into the national treasure it is today, the base continues to evolve and redefine itself as one of the foremost training environments in the military’s arsenal. Known for its superb air space and training area as well as its ability to simulate realistic surface-to-air threats, the base is well-positioned for future growth.

“The future is bright,” said. Col. David May, Volk CRTC’s current commander. “Our challenge is to optimize the traditional live training environment as much as possible for modern weapons systems.  We need to squeeze every bit of capability out of what we have in terms of facilities, airspace, range space, and equipment.  Our innovative Airmen have done amazing things along those lines.  At the same time, we must continue building the training environment of the future.

May said commemorating Volk Field’s 65th anniversary has provided an opportunity to reflect on the base’s long lineage of service to Wisconsin and the nation.

“The 65th has been a great opportunity to stop and reflect on Volk Field’s history in a comprehensive way that I don’t believe has been done before,” he said. “So much has happened here with direct relevance and impact to training America’s warriors over the years. We’ve been so busy executing our mission that much of our history was not captured in an organized fashion. Volk Field itself is a magical place.  It’s naturally beautiful, has always attracted outstanding Airmen, and enriches the life of everyone privileged to be stationed here.”

But May was quick to credit the Airmen who garrison the base for Volk’s reputation as a world-class training facility.

“It all comes down to the Airmen,” he said. “If not a base, Volk Field could have easily been a state park.  It’s the many people over the years that have made great things happen here…created memories, built lasting relationships, and most importantly, provided a world class training venue for the National Guard and the joint forces.”